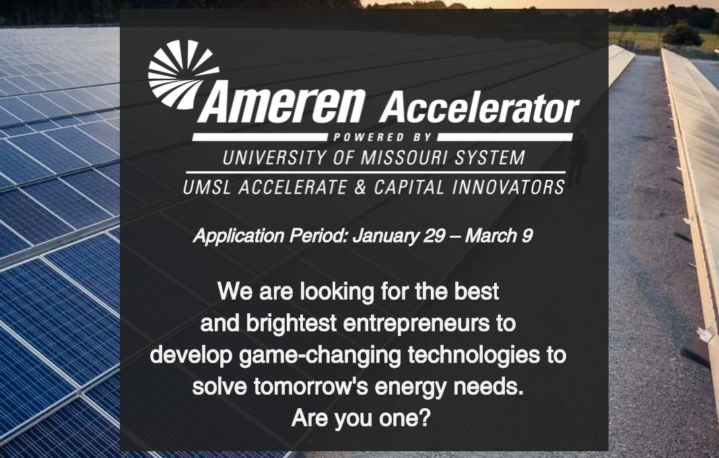 Applications opened last week for the Ameren Accelerator, a public-private partnership between the University of Missouri System, UMSL Accelerate and Capital Innovators that offers mentorship and $100,000 in investment to energy-technology startups.

Selected companies each will receive $100,000 in seed capital to participate in the Ameren Accelerator program. The program is hosted at Cortex, the innovation and technology district in the Central West End of St. Louis.

The deadline to apply to the accelerator is March 9th.

Not just any accelerator

At the conclusion of the program, participants will showcase their efforts to the mentoring teams, potential third-party investors, corporate executives, entrepreneurs, students and the general public during Ameren Accelerator Demo Day in September.

Ameren may select the most promising projects for ongoing mentoring and engagement beyond the accelerator program.

The call for applicants follows a successful 2017 Ameren Accelerator, drew more
than 200 applicants from 23 states and 31 countries.

Ultimately seven startup companies from around the world were selected to participate in the inaugural program.

“This wouldn’t have been possible without the mentoring and support we received through the accelerator program. It was an invaluable experience and a real game-changer for our company.”

Investing in the future of energy — and the region

The Ameren Accelerator is one of the first of its kind in the United States and the first in the St. Louis region to focus solely on emerging energy technologies.

The goals of the program are to better position Ameren to meet its customers’ future energy needs and expectations, attract job-creating startups to St. Louis and provide university students the opportunity to be more involved and engaged in the energy business.

“Through the Ameren Accelerator, we’ve been able to identify and support startups and innovations that have the potential to make a lasting, positive impact for our customers and our industry, while bringing new jobs to our region,” said Warner Baxter, chairman, president and CEO of Ameren.

“We look forward to opening the next chapter of this unique public-private partnership and welcoming our second Ameren Accelerator class.”