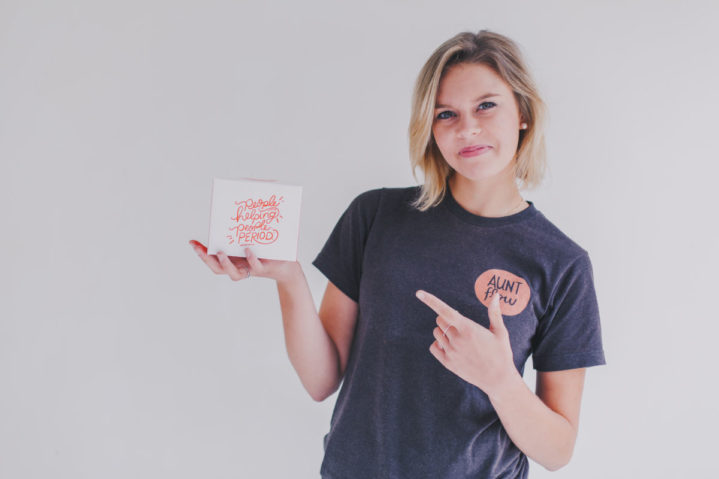 How a 19-year-old founder developed her buy-one-give-one subscription box of menstrual products and aims to be a hub for all things menstrual.

“Growing up… my mom would talk to me about how many women she would serve (she’s a therapist) who would come to her groups wearing plastic bags or dirty socks when they were flowing,” says Aunt Flow founder Claire Coder. “I didn’t understand why. At my house, we always had a stock.”

It wasn’t until last year that 19-year-old Coder found out that menstrual products aren’t covered by WIC or food stamps. She also discovered that many organizations that menstruating people could go to for help didn’t offer more than two tampons per person per month—barely enough to get through a full day.

“Craziness,” says Coder to HMHB. “I knew I wanted to create a sustainable solution to this problem.”

What she came up with was a buy-one-give-one subscription box of menstrual products. The supplies are 100-percent cotton, FDA-regulated, hypoallergenic, and biodegradable, Coder says.

“Can you believe that many name-brand products are still bleached with chlorine?” she says. “Yikes.”

Launched Nov. 20, the company is also proudly gender-neutral (“Yes, there are humans that identify as male, but still menstruate.”) and its branding reflects its forward-thinking mentality.

“Many other companies are softer and secretive,” says Coder. “We don’t want our menstruators shoving tampons up their sleeves to hide that they are on their period. Menstruation is a fact of life, and it should not be shameful!”

Anyone who went through junior high knows that “Aunt Flow” is a euphemism for a menstruating person’s time of the month. The fact that the natural process of having a period still retains a euphemism (in 2016, no less) prohibits open dialogue around the subject—and that’s where Coder came in. “It’s great when I tell people I own a company called ‘Aunt Flow’—they’re taken aback,” she says. “Clearly I couldn’t be talking about that. But I am. I truly enjoy talking about menstruation—someone has to!”

Of course, going from talking about it to doing something about it was a bit of a challenge. “I had to figure out manufacturing, supply, design, web development, product placement, pricing, literally everything,” says Coder, who had already started a promotional button, magnet and mirror business at 16, eventually expanding it throughout Midwestern boutiques, online retail and eight distributors. But this was a whole different game.

“Nowadays, it seems like everyone is starting a business, and until you have some traction, no one takes you seriously. So I had to keep climbing, by myself, until I made it somewhere. Now I’m starting to receive the support that I needed months ago.”

In order to devote herself to the business full time, Claire opted to drop out of college. She’d been enrolled at Ohio State for one semester but realized she “simply was not learning practical things to become an entrepreneur,” she says.

Instead, it’s the on-the-job experience she created for herself at 16 that’s taught her what she needs to know. “I used what I learned in my first business and converted it to tangible knowledge for Aunt Flow,” Coder says. “Although I am only 19, I feel as though I have developed a valuable skill set. I know what I know, and I surround myself with people to help me in areas that I don’t know.”

But it wasn’t just the logistics of starting a product-driven business that were challenging for Coder:

Education was also key—and not just for potential customers. “Until I started talking about menstruation openly, I did not have any idea the misunderstanding that typical humans have surrounding ‘that time of the month,'” says Coder.

“Women and men alike shy away from the topic and lack a basic understanding of human anatomy.”

“I was on an interview call for an accelerator I was applying for, and one of the judges stopped me to ask why I was putting so many tampons and pads in a one-month box,” she says.

“There are 18 in a box. I was dumbfounded. He literally thought that we use two tampons a month. This man was by no means dumb, uneducated, or trying to be rude. He just didn’t know.”

Going With the Flow

And yet, there are evident signs of Aunt Flow’s success: The company has raised $25,000 with crowdfunding and launched pre-sales on October 20 with 100 paying subscribers on day one. Three months ago, Coder brought on Lindsey McEntee to lead social media campaigns and community outreach.

She works part-time, but “has enhanced the business tremendously,” says Coder. Another addition, Melory Mirashrafi, is a student in Oregon who contributes to the company blog and ideate campaigns between classes.

But Coder also has those with experience guiding her, thanks to a “strong group of mentors and advisers to help me not get too lost along the way,” she says.

Currently, the company continues to be on the up: It is growing subscribers by 10 percent each month, and will donate more than 5,000 tampons and pads during its first month.

Coder and Aunt Flow have also won an impressive list of national awards, including first place from Alleviating Poverty Through Entrepreneurship this year and a listing among the NFIB’s Top 100 Young Entrepreneurs last year.

Going forward, Coder also wants to make creating an open space for education a priority for Aunt Flow. “Getting into this business, I had no idea the kind of education I would need to start with when presenting,” she says.

“Eventually, I want Aunt Flow to be the hub for all thing menstruation. I want to answer real questions like:

‘How do I insert a tampon?’ and ‘Can you get pregnant if you have sex on your period?’ Right now, there are general overviews or Yahoo! Answers, but there aren’t tutorials or human-to-human explanations. One day, that will be Aunt Flow.”

But her vision for making the world better for 50 percent of its population is even larger. In the first year of business, she wants to donate more than 100,000 tampons and pads to American organizations—and maybe, just maybe, get on Ellen. “I dream that one day, menstruation will not be “taboo,” and there will be menstrual products in every bathroom in the United States,” she says.