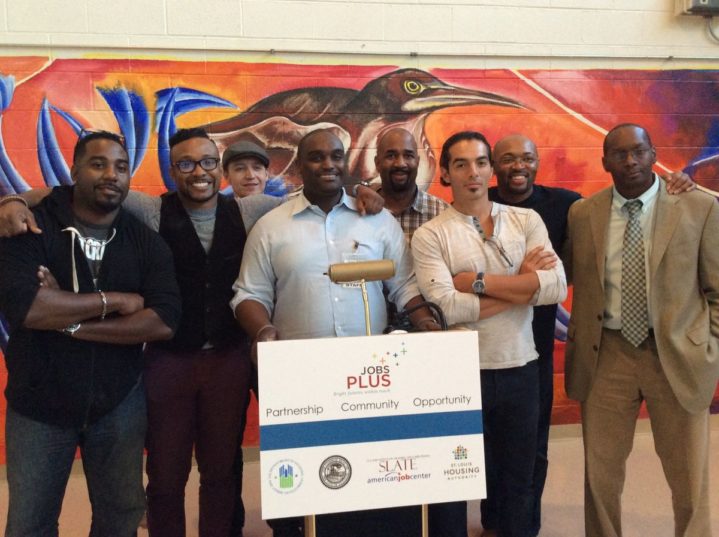 Cambry, who has set up shop in St. Louis for at least the next four years, brought eight members of the Blue1647 leadership team to serve the 240 residents of the largest and oldest SLHA facility, who earn well below the average annual income.

Less than two weeks after his arrival, Emile Cambry has already made a name for himself in St. Louis.

Largely unacknowledged by local media, Cambry and his Blue1647 team opened the first technology innovation center on the site of a federally funded housing development in the nation last Tuesday.

“It’s an amazing opportunity to bring our vision from Chicago to St. Louis,” Cambry said at the opening event, which took place at the Al Chappelle Community Center inside the near south side public housing complex.

Cambry, who has set up shop in St. Louis for at least the next four years, brought eight members of the Blue1647 leadership team to serve the 240 residents of the largest and oldest SLHA facility, who earn well below the average annual income.

“We really want to be grassroots with our engagement,” says Cambry. “It means meeting people where they’re at. We are bringing a culture of technology development, innovation and creativity in places where people may not otherwise associate with it.”

The Blue team will hold workshops for adults in partnership with SLATE and the NAACP during the day and teach classes for youth in the evenings. “We have everything from Mindcraft, JavaScript development, mobile application development and 3D printing,” explains Cambry.

Executive Director of SLATE Michael K. Holmes believes the partnership with Blue1647 is a “game changer” for the public workforce system in St. Louis, partly because most of the team members and the residents have the same ethnic background.

“It was important to bring somebody who looks like them, who can give them encouragement and get them trained,” Holmes says.

It was regional NAACP president Adolphus Pruitt who made the partnership possible in the first place when he introduced Cambry to Holmes. Although the NAACP itself is not an official partner of the project, Cambry says the organization has helped with advocacy.

“[The NAACP] will be part of the digital pathway initiative we’re putting together,” he says. On top of the classes and workshops, according to Cambry, Blue will also provide WiFi-enabled laptops for the community, both at the community center and at home. “It’s one thing to train people; it’s another to have a place where folks can have internet in their homes,” Cambry emphasizes.

Pruitt seconds Cambry’s intentions: “We are exposing residents to the technology and allowing them to have access to everything the Internet has to offer.”

“That’s the digital divide,” Cambry explains. “Now we’re working on the opportunity divide, which is the ability for folks to have careers and jobs and opportunities and technology.

A Plus for Clinton-Peabody Residents

In April of this year, SHLA and SLATE received a $3 million grant from the U.S. Department of Housing and Urban Development (HUD) to kick-start the Jobs Plus Pilot program. The initiative will benefit residents of the public housing project, where the average family income is $7,200 a year, according to SLHA executive director Cheryl Lovell.

“The HUD grant is a testament to the really strong partnerships we’ve been able to put together,” says Cambry. “We are able to bring job development, technology development, and something for the youth as well.”

As only one of nine HUD grant recipients nationwide, Clinton-Peabody residents on Tuesday witnessed the official launch of the program, which is executed by the SLHA in cooperation with SLATE. The purpose of Jobs Plus is to “provide job-training, financial incentives and community support to create a culture of work in the community,” says SHLA Program Coordinator Lutricia Lawal. “We brought together outside partners like Blue to alleviate any barriers the residents may have to keep them from going to work.”

One of the main features of Jobs Plus is on-the-job training, which entails reimbursing employers for the cost of teaching employees missing skills. “It’s an opportunity to go to work immediately with your skillset and learn the requireed additional skills on the job,” explains Stacy Fowler, Manager of Special Projects at SLATE Missouri Career Center.

Work Experience, another component of Jobs Plus, allows long-term umemployed residents to work a job for a few weeks earning a stipend to “get their feet wet again,” thus allowing the employer to find out if it is a good fit and vice versa. Says Fowler: “If the employer doesn’t hire the resident full-time at the end of the stint, we’ll continue the job search with them.”

By far the most discussed aspect of Jobs Plus, however, was the so-called Earned Income Disregard, which effectively freezes employed residents’ rents for the four years the program is running. Normally, people living in public housing have to pay more rent when they get a pay raise (30 percent of a household’s income). “Thanks to the money they will save in four years, they should be able to move into their own place or into higher public housing,” says SLATE executive director Holmes.

“My mother paid a dollar for rent,” Hansman explains. “Once she got a job, the rent was so high, she quit her job because she couldn’t take care of us with a minimum wage check and having to pay rent.”

Having lived in the community all his life, Hansman says the Jobs Plus initiative has been needed: “It’s a true blessing for the whole neighborhood.”

From now on, the Jobs Plus office will be staffed Monday through Friday from 9am to 5pm. “We’re bringing the resources on-site so they don’t have to worry about transportation to get there. Everything they need will be here at the Al Chappelle building,” says SHLA employee Lawal.

Resident Bonita Anderson is one of seven full-time community coaches, who provide education and support to the community. SLATE, the organization responsible for all workforce development activities at Clinton-Peabody, has recruited community members for volunteer and staff positions as a part of the grassroots nature of Jobs Plus. Anderson believes it is important to have locals do the work:

“My neighbors understand me better than a stranger.” 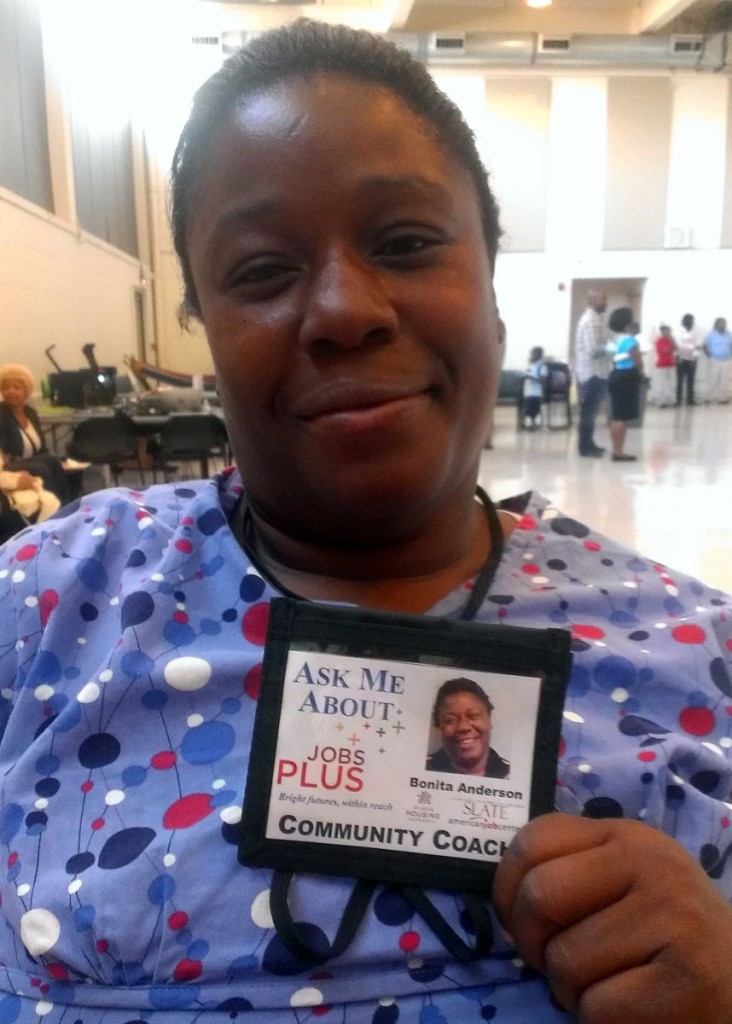 Anderson teaches her neighbors how to manage surpluses, assists in reading courses and imparts other important life skills, such as financial literacy. “The Jobs Plus program allows you to go further in your community and in your education,” says the community coach, whose work is complemented by on-site case managers and volunteer Jobs Plus ambassadors.

Program coordinator Lawal says Jobs Plus is one of the most innovative programs she has seen in her ten years with the housing authority. “I believe Jobs Plus will enable residents to get to where they need to be.”

SLATE executive director Holmes hopes for the four-year program to produce tangible results: “It should lead to jobs, training, internships and experience.”

Regional NAACP president Pruitt says Jobs Plus is about creating pathways for individuals in public housing. “It enables residents to work their way out of public housing back into the mainstream,” Pruitt believes.

In February of this year, according to a recent St. Louis Public Radio article, 11,400 St. Louis families were on SLHA’s wait list for public housing.

It remains to be seen if the Jobs Plus program can reduce that number. The official title (Jobs Plus Pilot program) and the fact that only nine grants were awarded nationwide suggests that the initiative has yet to prove its effectiveness.

SLHA director Lovell, for one, is confident in the program: “It will directly employ some of the residents, help hundreds of others transition to jobs, and teach marketable skills to adults and youth.”

To Cambry, Jobs Plus is all about giving opportunity to those who need it most: “We want the Clinton-Peabody residents to have more control over their future, the opportunities that they are given and a chance for more transformational types of experiences.”

The atmosphere at the launch of Blue1647’s tech innovation center and the Jobs Plus program could best be described as jovial and hopeful.

Some 150 residents of all ages saw a dance performance by the Gentlemen of Vision Drill Team, participated in a raffle, had a free dinner and were able to take home clothes. Kids were able to play Minecraft on several laptops and try their hand at 3D-printing.

Artist Jovan Hansman was very pleased with the program and the attendance: “If there weren’t so many people I probably would have cried. Funerals bring a lot of people together, and I have been wondering what positive event could possibly lead to the same turnout. It was beautiful to finally see something the whole community can come to.”

Cambry says the event exceeded his teams’ expectations. “The turnout shows that residents are eager for opportunities.”

By putting residents in the limelight and letting SLHA and SLATE representatives do most of the talking, the Blue1647 team let their action speak for them.

The residents eagerly embraced all the opportunities and equipment the community builders had brought along with them from Chicago–state-of-the-art hardware, Internet access, a tech curriculum, art (including a giant bird mural inside the Al Chappelle Center, courtesy of Blue’s artist-in-residence Erick “Roho” García), beanbags, hammocks and clothing (residents patiently formed a long line).

Cambry says the Clinton-Peabody project is just the beginning. Over the course of the next four years, he and the Blue team plan to open at least five similar facilities at strategic places in St. Louis aimed at community and workforce development.

“People are going to be very surprised at what we’re going to be able to do. No one works harder than Blue1647. We really care about community and will bring every single resource here to make it happen.”

Benjamin Bathke
Benjamin came to Missouri all the way from Germany to get a Master's degree in Communications at Lindenwood University. In the spring of 2013, he sailed around the world on a ship with 600 college students and 10 startups, which made him realize that he wants to pursue a career at the intersection of journalism and entrepreneurship. He is an avid traveler, football player (American football, yes), and collector of new ways of thinking.