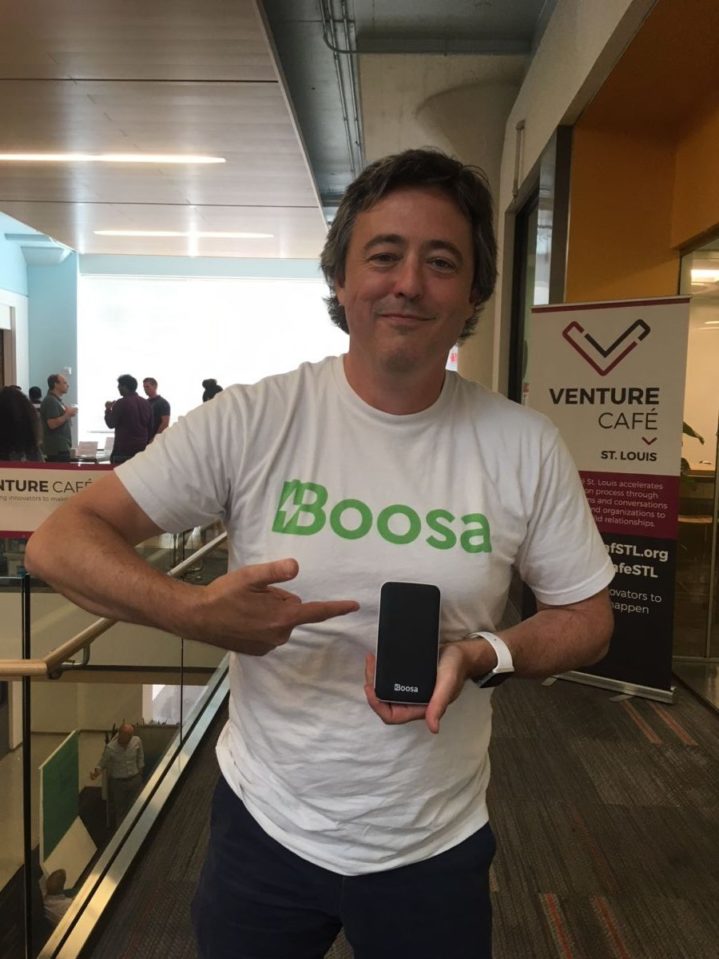 From concept to market, this local entrepreneur is tapping into a consumer marketplace hungry for power and afraid of losing it.

The idea came to him when he noticed a growing trend in consumer behavior: an increase of phone use draining batteries faster than ever and the anxiety users feel about it.

There’s even a word for it,” he says, “nomophobia- the fear (irrational or otherwise) of losing connectivity or power in one’s cell phone. We use them for everything. It’s used for airline ticketing, way finding and tracking our insulin, and media and games and every once in a while, a phone call. But when we are down to 30-20% and we don’t have power, what do we do? Not using your phone isn’t an option for most people.”

So far, he reasoned, the big brands that dominate the marketplace for power banks and phone chargers seem to miss out on the bigger picture and tap directly into the consumer experience.

“There’s no shortage of competition out there,” Says Reimer, “there are tons of these on the market, but there’s so many people who still don’t own these and their easy to own. A $29 power bank keeps your $1000 smart phone working. There is a shortage of understanding in the marketplace of what these products can do to improve your life and our devices are part of our lives.”

Chris’ entrepreneurial journey began as a kid growing up in north county’s Normandy, MO. There he said, he and his brother would collect used golf balls and sell them back to golfers. It was lucrative for the boys (paying for candy and soda), but it took a lot of effort and was difficult to scale. His entrepreneurial spirit, he says, isn’t driven by a need to be his own boss, or make millions in an unicorn-style exit. He loves his day job as the Associate Director of New Media at Maryville University, he insists, and what motivates him is the love of new challenges.

This latest challenge to design a consumer friendly device, started with researching Chinese factories on Alibaba, the world’s largest eCommerce marketplace, then contacting them to start the process of product development. That entailed outreach by email, often times with a language and a time zone gap, and testing out tens of product samples. Through this type of trial and sampling, he gathered a short list of preferred vendors, and began product testing gradually coming to a conclusion on what features would make the best MVP. LED? Out. Pass through charging capability? In.

Riemer makes a clear point that he isn’t an engineer and he isn’t an inventor. The form factor of the Boosa power bank already existed, the technology in the battery has been around for years. What he is however, is both a product manager, whose many decisions while testing and trying out different products led him finally to the Boosa that was in front of us charging my iPhone recorder, and a marketer, whose skill in social media is pretty obvious when you take to twitter and search for #BoosaWorld.

Joined the #BoosaWorld just in time! Kept my phone charged last night during a concert and didn’t have to worry about “saving” my battery for the @lyft ride home. pic.twitter.com/ERpSr1ZetY

“The fact that people are calling it ‘my Boosa’ when telling me about their experience with the product is great. It means the brand has staying power.” Boosa, a brand derived from a nickname for Reimer’s cats, has taken on many other meanings as a product, including “boost” and Boosa World is filled with stories about near missed opportunities and “life saving”.

The most novel thing about Boosa may be the connection his customers are making to the brand and how Chris makes himself an integral part of that brand. For every order he ships, he includes a personal note, and on several occasions he has personally delivered the Boosa to get a selfie and thumbs up with a local celebrity. It is a local merchant’s take on the phenomena of influencer marketing.

So far, orders for the BoosaTech power bank have exceeded his expectations. Approval to sell on Amazon, at first appearing like a done deal, has for some reason been put on pause, for reasons Reimer himself didn’t know. Given the well-known brands and marketing dollars that the competition can bring to bear, Reimer wasn’t certain that Amazon would lead to big sales overnight anyway, so in the meantime, without spending a single dime on paid advertising, he seems content with this level of success and happy to be selling a product like Boosa to customers that care one tweet at a time.