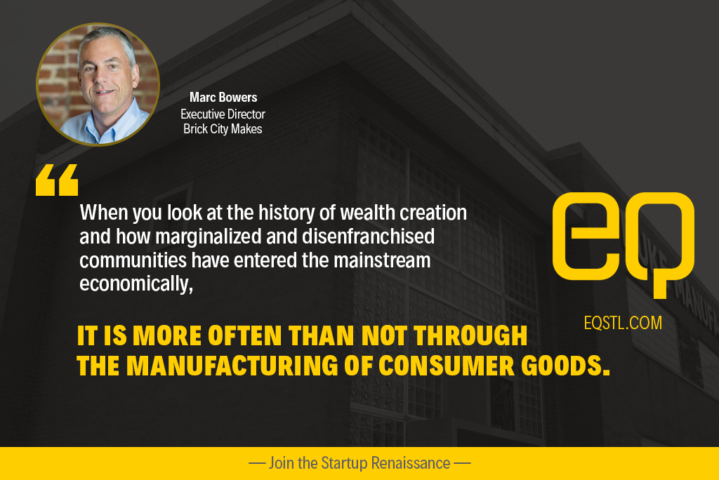 St Louis's first entrepreneur support center for manufacturing is one step closer to a reality.

Brick City Makes will be St Louis’ first entrepreneur support center for manufacturing – essentially a co-working space dedicated to manufacturing. The six story, 87,000-square-foot factory space in the Fox Park neighborhood at the corner of Texas and Sidney streets will eventually house small industrial firms or provide additional space for growing mid-sized manufacturers as they expand.

With investments from the St. Louis Development Corporation and tax abatements for 15 years, the project now requires approval only from the Board of Alderman.

The project is a partner venture between DeSales Community Development, the nonprofit which owns the building and will manage the premise through a wholly owned affiliate, Fox Grove Management, and St. Louis Makes, a nonprofit run by Marc Bowers that supports manufacturing entrepreneurs.

Restoring Economic Anchors to the City and its Neighborhoods

Marc Bowers, Executive Director of St Louis Makes and Tom Pickel of DeSales Community Development, came up with the plan as a way to reinvest in St. Louis neighborhoods and help support the manufacturing industry that helps define them. The target constituents for St Louis Makes are small manufacturers with less than 25 employees seeking to grow. According to Marc Bowers, “These are privately owned and controlled companies that are not divisions of larger firms.”

Marc Bowers and STL Works have observed that small to mid-sized manufacturing have traditionally acted as neighborhood anchors all throughout St. Louis.

He says the Brick City Makes project was originally conceived by DeSales Community Development with in-field economic development research sourced from a number of studies. The studies found that many of these businesses, some of which are passed on from generation to generation, still toil away behind grimy exteriors, but provide local employment opportunities and economic stability for the communities in which they do business.

For some, these corner businesses represent eyesores, easily passed over or looked on with disdain, and Mark knows some folks will look at a building that’s been an operating machine shop for years and think, “that’s just a grungy tool and die shop, it’s a shame someone doesn’t turn that into luxury lofts, but for me,” he says, “that’s what’s in their mind. For the right entrepreneurial mind, that’s an opportunity to grow and scale an existing business.”

St. Louis Makes acts like a migratory trade organization spreading best practices “from industry for industry.” As part of the entrepreneurial support mission, they host training and networking events on entrepreneurship for those manufacturing shops who are seeking to fill excess capacity, expand their product lines, and grow their business. For a full list of their events and tours, see http://stlouismakes.org/events/.

One of the benefits of a Manufacturing co-working space like the Brick City project will be its ability to put St. Louis manufacturing into the current spotlight on innovation.

The Brick City Makes building is a few blocks from technology incubator T-Rex, near the hip and thriving Cherokee street, and just a few miles from Cortex. In an earlier interview with the Post-Dispatch, Tom Pickel of DeSales remarked, “This kind of fulfills a unique role, there really hasn’t been that kind of focus on the manufacturing sector.”

As a nonprofit, Bowers sees manufacturing as the shortest path for someone from a marginalized low-income community to wealth, “when you look at the history of wealth creation and how marginalized and disenfranchised communities have entered the mainstream economically, it is more often than not through the manufacturing of consumer goods.”