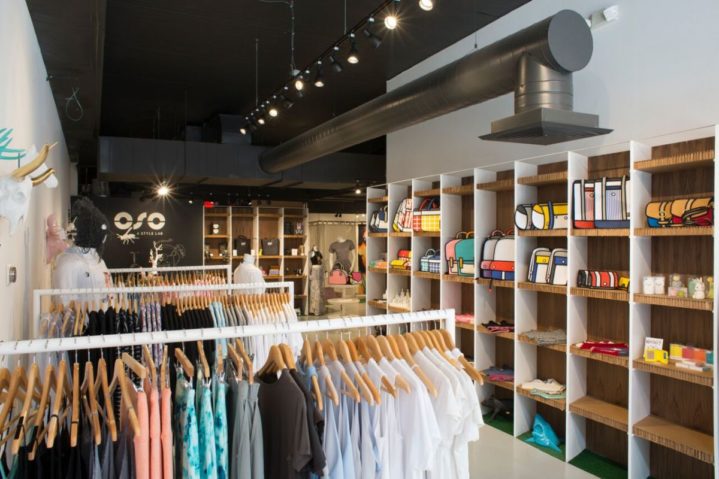 OSO: A Style Lab (pronounced oh-so) is precisely unlike any other store in St. Louis. Located in the Loop, the store focuses on curating a product assortment where each product—no matter its provenance—carries with it a story. The vibe of the store is both minimalist and bright, Centro and Ikea, high and low, Japanese and Dutch, aspirational and accessible; it’s your ridiculously stylish friend who wears black button-ups (whether Celine or Zara, you can’t tell) and has her finger on the latest pop-influenced trend coming from Japan.

“Some of our products are local; some of it is not; some of it’s sustainable—so I like to say there’s a little story behind every piece,” says founder and co-owner Jen Rieger. “I think there’s a movement of people interested in that now—like where things come from, how they’re made, what about them, or even just the story behind them. The artisanship, things like that. That’s another thing we care about, but we also care very much about style.”

Those plugged into the design scene in St. Louis might know Rieger’s name as well as business partner Chris Rubin de la Borbolla’s from their other business, 963 Collective. To answer your question, no, they’re not dropping their web-design outfit anytime soon. They’re just working a lot of hours, though never so many that they can’t deliver for their clients (luckily, as Rieger notes, a lot of product research for OSO can be done poolside from a lounge chair).

But the two businesses also intersect at serendipitous angles. Customers will come in, ask about OSO’s branding (the logo and type were designed by de la Borbolla himself), and then, perhaps, a lead for 963 is born.

They also built a marketing and communications background, partly from two years running The Clover in Webster Groves. But it was University City that approached the partners about starting a boutique in this retail space—and that involved building a concept no one had ever quite seen in St. Louis.

“Chris and I wanted to bring something that we don’t have in St. Louis—something unique and different,” says Rieger. “We wanted to include a lot of local energy but also just creative energy from local, national, international [designers].”

But they also bring St. Louis into the minimalist setting—right into the very fabric of their store. They worked with Anew Nature to create racks and shelving from cardboard, as well as a moveable fitting-room concept that means the store can be endlessly re-configured for when the store hosts events or gatherings.

And about that cardboard: “It was a really great integration and reflects into our whole aesthetic, which is high and low art, street avant garde and East and West Coast types of things happening,” says Rieger.

Another aspect of the business—community engagement—is a huge priority for Rieger and de la Borbolla as well. Besides a dedication to an internship program, they also hold gatherings in the space.

The partners also naturally gravitate toward education—they both took time away from teaching at Webster University this fall to focus on the store—and the internship program helps them stay “fresh,” as Rieger put it while training students in the art and substance of retail.

But education plays into their curation, too: The duo likes to highlight brands that seem to live on the edges of Midwestern consciousness. People will have seen them in magazines or online, but not necessarily on store shelves.

Cartoon-cool purse and backpack brand Jump From Paper “is really big overseas,” says de la Borbolla. “People have seen this online, but they haven’t seen it in person, and we really thought it would resonate well here.” So they began importing it, alongside other design-driven brands like Kidrobot. “We have the opportunity to bring them in and educate people about what that culture’s about.”

So there’s substance behind the style, which is always driving the partners’ other decisions when it comes to choosing their stock of clothing, accessories and home goods. De la Borbolla says they look at composition, color, fabrics, the weight of things—all of it has to ring true to merit a spot on their shelves.

But the fun—and most important—part of their retail philosophy kicks in when you consider the store’s tagline: “a style lab.” “We actually buy small and test to see what people might like and work with a lot of independent and niche brands to see where that goes,” says de la Borbolla. “It’s kind of a platform for that to see what resonates.”

Previously, the duo has worked with partners like Michael Drummond. They design the printed textile, and then Drummond cut it into patterns and “made it into things” for them, de la Borbolla says.

But for them, the commercial is also personal, and they draw from things that they’ve curated individually over the years to inform some of their buying decisions—though as Jen points out, they have to make decisions based on their audience as well. “Otherwise everything in this store would be black,” she jokes.

“A lot of this stuff is stuff we were familiar with back in the day,” says de la Borbolla, gesturing toward the Areaware piggy banks, which hold up to $10,000 in dollar bills and are officially known on the brand’s website as “Reality Bank in the Form of a Pig.” “I’ve collected those for a decade or so and just wanted to bring them in.”

So far, their formula is working: From the barometer of locals and tourists that wander in—many of whom say the store reminds them of shops in hometowns of Seattle and New York—it’s clear that OSO seems to be marking its mark in the city.

“We’ll get asked if we’re only one store or if we’re a chain,” says Rieger, questions that indicate, “Oh good, we did something right. It presents itself as a solid finished piece, but to us it’s never finished.”