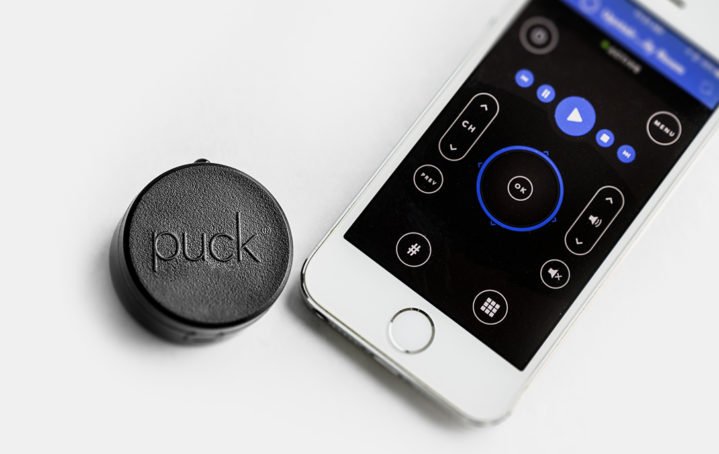 SmashToast Wants to Better Your Life Through Smart Product Design

The idea for SmashToast, and its first product, Puck—a device that essentially acts as a universal remote for older devices—came from an unlikely source: Apple TV remotes that became the fallen victims of toddler teeth. Here's the rest of their story.

Apple’s advent and ascent ushered in a new wave of consumer product design: Items that were consciously sleek, minimal but efficient, and fit comfortably into consumers’ increasingly crowded lives. SmashToast aims to carry on that tradition with products that “make lives better using simplicity, elegance, intuition and technology, with a balanced approach to form and function,” says the company’s co-founder, Barnabas Helmy.

If you were to ask Helmy when it all started—well, it goes back a ways. “There’s a photo floating around my mom’s house when I was about 7,” he says. “I threw a hat down at the local farmer’s market and took requests on my violin. I made about $10 in change and that was pretty much the start of it.”

The idea for SmashToast, and its first product, Puck—a device that essentially acts as a universal remote for older devices (see ya, three remotes on the coffee table)—came from an unlikely source: Apple TV remotes that became the fallen victims of toddler teeth.

“My daughter, 3 at the time, had a propensity to grab the Apple TV remote and chew on it, rendering it useless,” says Helmy. “So I needed something to control it, and I couldn’t stand Apple’s app.” And while he was at it, “I also wanted something that would control the TV and the sound bar, independently.”

And then there was the matter of appearance. “The third issue was purely aesthetic,” says Helmy. “No more wires and no line-of-sight restrictions. There are solutions out there that provide control of IR devices from the smartphone, but they have wires. They must also be situated so that, like a remote, they can send an IR signal to the target device without any obstructions, like walls or cabinet doors.”

Following in the entrepreneurial tradition, “I figured there had to be a better solution,” he says. “When I couldn’t find it, I sketched one out—I’ve still got the Post-It note I sketched Puck on above my workbench in the basement.”

Helmy showed the note to Andrew Brown, and the two founded SmashToast in March 2014. Helmy took the role of the big-picture and vision guy, carefully laying the foundation for the business. Brown was the hands-on tech expert who took Helmy’s idea from abstract to tangible. He was “focusing fully on the app code and figuring out how to build what was in my head.” 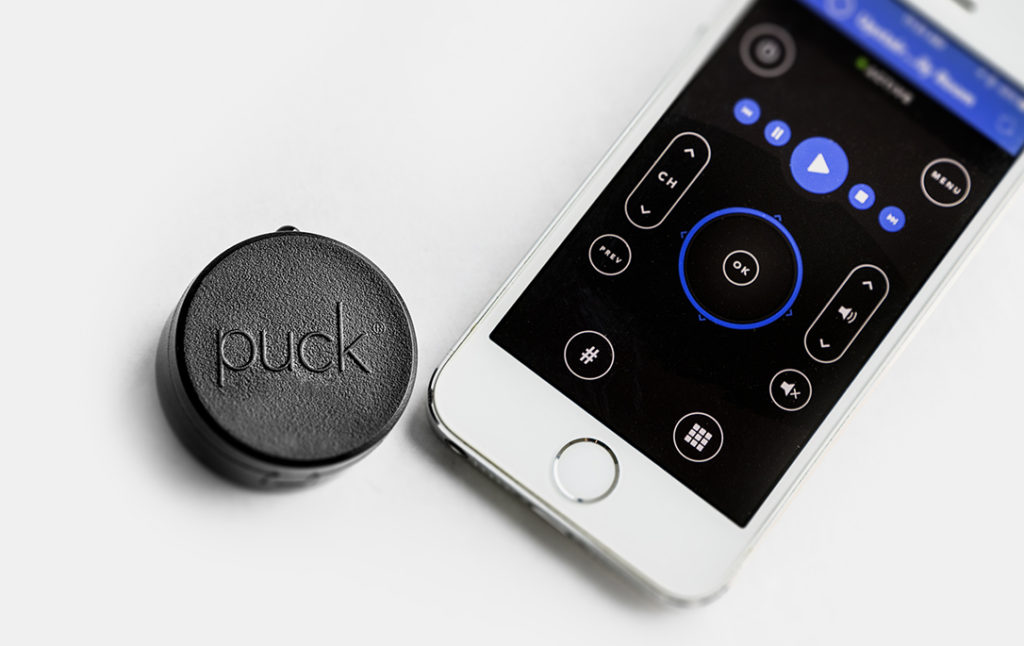 Brown, who is no longer with the company but remains as an adviser, also brought a flip side to Helmy’s personality that proved to be a huge asset to the company’s operations. “Andrew and I are both problem-solvers,” says Helmy. But there’s a marked difference between the two: “While Andrew is admittedly less risk-averse and entrepreneurial, I tend to feed of the pressure and have always been entrepreneurial.”

Now, Helmy’s day-to-day is operations-focused, managing them with contractors scattered throughout the Midwest. But that doesn’t mean that doesn’t change: “Like most entrepreneurs, I have to wear several hats,” he says. “There will be periods when I focus on research and development—my favorite aspect—or fundraising or marketing and PR.”

Funnily enough, there’s one piece of groundwork for the company that had actually been around longer than the company itself. “SmashToast.com was actually a domain I’ve owned for years that I would use as a testing server for clients I built websites for,” says Helmy (proof that if you think of a great URL, you should snap it up). “After hearing time and time again how great the domain name was, I had always wanted to start a company with it.” 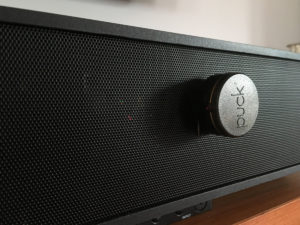 SmashToast’s Puck “removes traditional remotes from the equation, which is a pain point for many folks who assume that three or more remotes are a permanent object on their coffee table,” Helmy explains. “You can see this problem amplified when you ask a bartender to change a channel.”

Puck solves this with a splash of tech. At 1.6 inches, the battery-operated Puck isn’t much of a physical presence. But what it does is pretty impressive: “It works by attaching to the target accessory near it’s IR receiver—the part of the TV that accepts the remote signal,” says Helmy.

Meanwhile, “the business end of Puck is essentially a universal remote,” he explains. “It communicates with the phone using Bluetooth Low Energy, or BLE. BLE has a great range and can penetrate walls, meaning devices can be hidden from view—and no more wires.”

To the uninitiated (or to non-techy people who just read the above explanation), these devices can seem complicated—you might as well just deal with the three remotes you’ve (finally) figured out how to use. But Helmy waves that aside. “It really is a simple device,” he says. Basically, as long as you know how to work an app, you’re golden: “I designed it in a way that would put all the heavy lifting on the app side,” Helmy explains.

“Puck is essentially a bridge to communicate with older devices,” he adds. But for now, it’s iPhone only—though that’s no fault of the Android OS. “One of the reasons we decided to roll out iOS vs Android was that the iPhone doesn’t have the ability to control IR equipment without additional hardware, while many Android devices have an IR emitter built into their phone,” Helmy explains. “Despite this, we get quite a few requests for an Android app.”

There are two big competitors right now for Puck: Logitech’s Harmony device and PEEL’s Pronto unit. But Puck corrects the flaws in each: “Harmony will cost upwards of $200 when all is said and done, you have many more wires to contend with, and the app experience is complex and cumbersome,” says Helmy. And although Pronto retails for $49, and controls all devices in a single room, Helmy says those devices have to always remain in Pronto’s line of sight.

Helmy learned at the outset that ambition is one thing; doing is quite another. “The biggest challenge early on was diving headfirst into a world I knew virtually nothing about,” he says. “Unlike other ventures I started, hardware requires a lot of capital to get going, which meant I needed investors to help. Not having street cred made me an outsider in this world, and that was very daunting.”

In fact, early meetings could have proved to be the end of SmashToast before it even really got started. “Early on, I met with a very influential investor who told me point blank that my idea would be successful, but I wouldn’t be the one to make it successful. This was followed up an hour later by another meeting with an investor who said basically the same thing,” Helmy says. “It’s like being punched in the gut, but I couldn’t just quit. I needed to learn how to sway investors that I was, in fact, the one to make Puck happen.”

But Helmy knew the general outline of what he had to do to get SmashToast off the ground. “When I worked on political campaigns years ago, I learned to plan backwards from a major milestone,” he says. “That approach made sure I had the capital necessary to get the product to market and ensure that I didn’t overspend early on.”

“The first goal was to manufacture the beta units and begin iterating the app,” he continues. “Once that was accomplished, launching the product became the focus.

But then a mentorship changed SmashToast’s—and Helmy’s—future. “A mentor of mine, Zach Kaplan, took me under his wing and told me that I needed to immerse myself in the center of the IoT world, San Francisco,” Helmy says. “But not for a couple days or weeks—a month.”

He headed to the coast in April 2015 and set up base camp at TechShop. “Zach introduced me to True Ventures, Andreessen Horowitz, and many others,” Helmy says. “He told me not to ask for money, but to learn, and that’s what I did. I told my story every day, several times a day, until I was mentally and physically exhausted.” 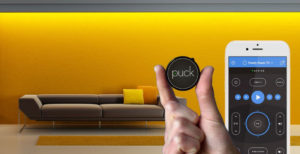 “Winning the Arch Grant came at the perfect time,” says Helmy. SmashToast won the award in 2015, and it “gave me the opportunity to be a part of something much bigger than my company, which gave me renewed purpose.”

Helmy took advantage of the incubator’s many benefits, including its legal counsel and accounting services. But it also had a huge effect on him personally: “Beyond introducing me to new investors and potential customers, Arch Grants opened my eyes to a St Louis I’d never seen before,” Helmy says. “I cannot wait to give back to the program and the city, regardless of the success of SmashToast.”

Since SmashToast’s Arch Grants matriculation, Helmy’s taken advantage of his experiences in San Francisco, Arch Grants and in the startup world to gather a pool of trusted brains who can lend advice when it’s needed—because not even the most successful startup can do it completely on its own. “I absolutely rely on input from my valuable mentors, advisers and investors,” Helmy says. “I think it’s somewhat impossible for a startup to avoid all mistakes, but seeking the council of those with more experience has been invaluable.”

And business has taken off since winning the Arch Grant. Helmy says SmashToast closed its seed round in August with a $150,000 raise. And there’s more on the near horizon: “In January, SmashToast will be exhibiting at CES in Eureka Park, the startup village,” Helmy says. “It was a huge honor to get accepted, and I’m really looking forward to what may come from the event.”

The Future of the Future

Helmy is already looking ahead to the next big development in consumer products: the home automation system. He’s set his sights on integrating Puck into such a system—and he knows time is of the essence. “Automation is inevitable and it’s becoming an increasingly crowded space,” he says. “I hope to stand out by creating a product that integrates with the home we already have, with familiarity, and build from there.”

His ideas are already underway: “I have at least four products in my notebook that will create a wider ecosystem for Puck,” he says. “I want to create an ecosystem that makes having a connected home an option for everyone, not just those who can afford it. As far as how many products we’ll eventually have, I don’t know—but life has so many inefficiencies, I have a large canvas to work with.”