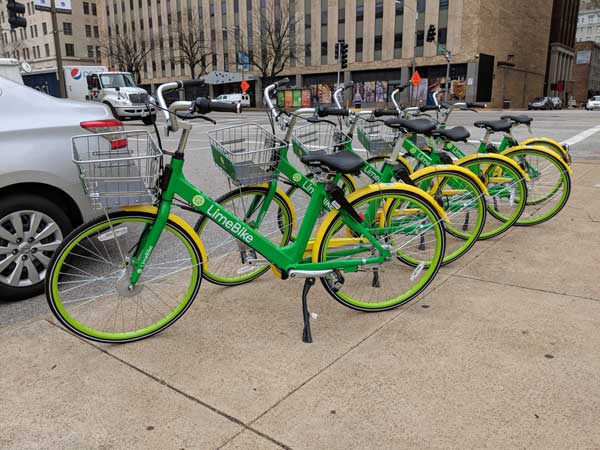 Bike share in St. Louis has been a long time coming. But as one of the two private bike providers prepares to abandon operations in the city, the program endures growing pains.

The program was created with the aim of making travel around St. Louis more widely-available, accessible and cost-friendly. But the road to the program’s implementation has not been without its set of twists and turns–and with Ofo’s recent announcement of its intention to withdraw from the city, challenges may lie ahead.

LimeBike, the first of two companies to introduce its dockless bikes to St. Louis in April, positions itself as a transportation solution revolving around three tenets: accessibility, affordability, and sustainability. In their Year End Report, the company estimates that drivers who replace one day of driving per week with Limbike save $1,000 over the course of a year, while ride-share commuters who replace one mile per work day with dockless bike-share program save up to $1,800.

Bring on the Bikes

Although the study acknowledged the benefits of a bike-share system, including the positive impact on public health, local business and the tourism economy, it estimated the total capitals costs – covering everything from initial site planning and permitting to supporting infrastructure such as stations, kiosks and docks for the bikes – at a whopping 12 to 14 million dollars.

Deemed more expensive than it was worth for a mid-sized city, the program was declared a non-starter. However, bike share once again became a topic of discussion in 2017, when LimeBike and its competitor, Ofo, introduced dockless bike-share systems to the U.S.

Unlike traditional bike-share programs that require bikes to be returned to specific stations, the dockless system uses smartphone apps and GPS technology to allow riders to drop-off their bikes virtually anywhere in the city. The technology allows riders to locate, lock, and unlock, bikes using only their smartphones, thus eliminating the steep capital costs attached to station-based systems for cities.

Bi-State Development had already announced its intention to secure funding for a bike-share initiative and started the Bike Share Working Group when news of the far more affordable, dockless version of bike share spread. The group shifted its focus to helping create a permit program that would allow the two private companies to operate in St. Louis with no cost to the city.

Following the launch of bike share in April, the City’s Streets Department took over running the permit program, and St. Louis became one of over 25 cities in the U.S. to adopt a dockless system.

Starting with LimeBike and then Ofo, which arrived three weeks later in May, were given permission to bring 750 units each to St. Louis during their first months of operation and expand incrementally thereafter.

As part of the permit’s requirements, LimeBike and Ofo must provide access to bikes in underserved areas, by maintaining a daily average of 20 percent of their fleets located in neighborhoods north of Delmar, and in parts of South City, centered on Dutchtown.

Besides this strategic placing and discounts for students, LimeBike has also furthered accessibility with a Low Income Access Program called LimeAccess. While, regularly, one 30 to 60 ride minute costs around $1, those who qualify for LimeAccess receive 100 rides for $5. The company partners with organizations in the Social Equity and Inclusion Target Neighborhoods to ensure that even those without documentation of government assistance are eligible for the program.

Setbacks for At Least One Vendor

Yet, after only two months in St. Louis Ofo is planning to withdraw from the St. Louis market.

Fortunately, for the local bike share program in general, the departure of the China-based startup’s constitutes part of a larger dramatic cut-back in all of its U.S. operations. Although it has already resulted in layoffs across the country, Ofo has not yet disclosed a timeline for the bikes’ removal from St. Louis.

In a statement from Deanne Venkar, the Commissioner of Traffic with the Streets Department of St. Louis, “The City of St. Louis is sorry for Ofo to leave St. Louis. While their program was just kicking off here in St. Louis, we were developing some great partnerships and ridership for our community. St. Louis’ bike-share program still remains strong, providing citizens with mobility options and reaching out into our target inclusion areas to have an equitable bike share program that is available for everyone.”

While Ofo’s withdrawal could raise questions about the future of bike-sharing in St. Louis overall, the City has put years of collaborative efforts and advocacy towards the project that the local commitment to bike-sharing is unlikely to be diminished.

Maisie Heine
Maisie is a graduate of Washington University in St. Louis majoring in English Literature and minoring in Communication Design. With a diverse set of experiences working in journalism, publishing and public relations, she approaches each assignment a little differently but always with an eye for detail. On the weekends, you can find her either on the squash court or at a local cafe.