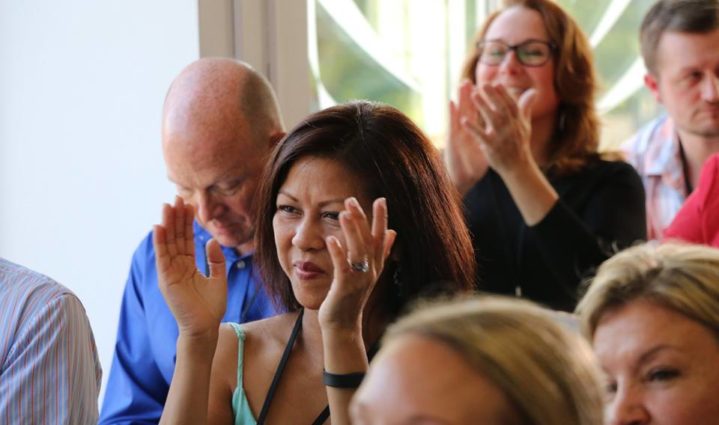 The Be Human Project Showcases People-Centric Mission with Salon Series

There’s an organization trying to change the way business leaders think about work and its surrounding, immersive culture in St. Louis. The Be Human Project was founded by Eliot Frick to, as its website says, “embolden leaders to experiment with human-centered practices that will allow them to make their businesses more human.”

In un-fancy parlance, that simply means providing a space to inspire workplace culture to be more human, to see workers not as salaries or units of labor—human capital—but as actual people. Nonprofits like this are needed right now, as workplace culture seems to be split between the old guard (cubicles, strict hours, no personal calls) and the new wave (ping-pong tables, unlimited vacation time, beer o’clock).

As Be Human executive director James O’Brien pointed out, the economy is going through a vast transformation right now, and managing from a human perspective will quell simmering undercurrents of anxiety or worry. So a shift in how organizations are run is in step with the times.

“Every org is a creative organization, but it needs to deal with the new reality of how work is getting done,” O’Brien says.

Culture is the environment in which people live—and the two above are a study in contrasts. But no matter which side of the line leaders fall on, they come to Be Human salons to be inspired, to take what they can of the ideas that will work for them to inject a little more humanity into the workplace.

“Human beings are parents, people who are taking care of their parents,” says chief marketing officer Jeremy Nulik. “They have things as human being that they’re bringing into the workplace no matter how much you tell them not to—and the idea that they won’t is unrealistic. We want to challenge business leaders to experiment with ways to make business more human.”

The fifth salon, held Monday for around 50 guests at the Bigwidesky offices in Clayton, featured guest author Jurgen Appelo, who wrote “Managing for Happiness,” a book about doing exactly that.

“There’s no one best practice,” as Appelo cautions those looking for solve-alls. But takeaways? There were plenty:

Human-focused managers manage the system, not the people.

Management is less about policing and more about architecture. “It seems not-human—people first, right?” added Nulik. “But if you give people the right environment and manage the system, then you’re doing your job.”

If you implement a new idea, treat it as an experiment, not as a “change.”

Change implies uncertainty—experiments are also, of course, uncertain, but that quality is built into the word and is to be expected. Test an idea out, refine it and adapt it.

Trust your employees with actual responsibility.

Appelo said that when he started having his team be self-organizing and in charge of their own budgets, turnover was greatly reduced—probably because they felt like they had a stake in the company, as opposed to being cogs in the wheel.

Explain things—the reason why you’re doing things. “We’re not just selling widgets,” Appelo gave by way of an example. “There’s a reason for why we’re selling widgets—it should be a means to an end.”

Selling meaningful products and services, he adds, “requires us to be innovative in the way we offer those widgets and reproduce them and the way we manage the organization. That requires innovation as well.” And that in turn requires learning.

Appelo mentioned to his CEO one time that the company didn’t celebrate anything. “We should stand still and appreciate the things that we’ve achieved, our accomplishments or our learning,” he said.

He suggested that they pick something that made a little noise. A bell was bought, and soon it became a gathering point for employees to celebrate professional victories—and personal ones.

There was a lot of other good advice, but you’ll need to check out Appelo’s book for that, which is a fun read and not what you might think of when you think of business advice books. For more info about the Be Human Project, visit behumanproject.net.