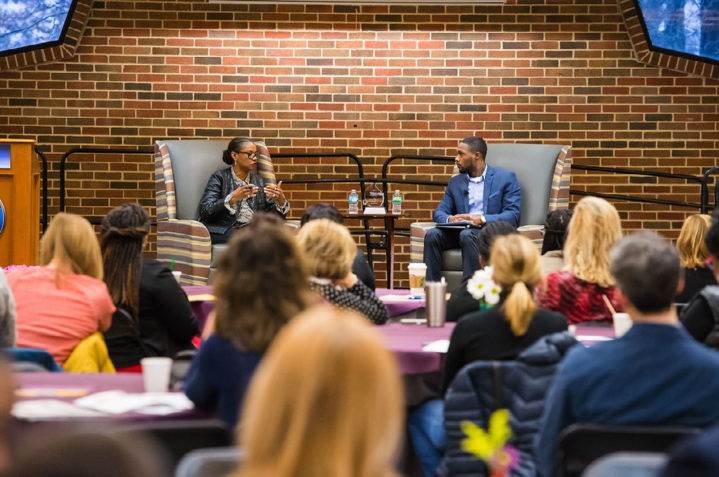 Sam White, a leading influencer, who is globally connected will discuss “What Does Allyship Actually Look Like?” at Webster University’s 5th Annual Diversity & Inclusion Conference. He shares his thoughts with EQ ahead of the event.

As I was preparing my remarks for Webster University’s 5th Annual Diversity & Inclusion Conference next week (register here), I kept coming back to a few critical aspects to social media that I think often get lost in the clutter.

Social media is, has been, and will continue to be a major part of our everyday lives. It’s no longer escapable even for people who aren’t on the platforms because of the sheer cultural and sociopolitical power social media exercises.

This isn’t a problem, necessarily, but far too many people, from legislators to many avid users, don’t really understand how it all works. Social media is a tool just like a hammer or a crane.

The key to using any tool is understanding what it was made for and what needs you have where it can be employed intelligently.

1. There is no inherent good or bad to social media or any particular platform.

Just like a hammer or a crane, social media’s value is tied to how it’s used. A hammer can be used to build a house, and it can be used to kill someone.

Social media has proven to be an effective tool for organizing international political movements like the democratic uprisings of the Arab Spring and launching massive and wildly profitable marketing campaigns like the Popeyes Chicken Sandwich. It has also proven to be an effective means of spreading violent propaganda as is still the case today with the attempted genocide against the Rohingya Muslims in Myanmar and amplifying the bullying that many kids face through middle school and high school to the point of suicide.

What does that mean for you? Stop personifying social media.

Navigate the platforms by thinking about what people do through social media, how those actions point to larger goals, and why people chose to use social media to achieve those goals. Are they building a house or tearing one down? Are you?

2. Social media platforms exhibit the flaws of the people who built them.

These platforms are not naturally occurring elements in nature. They are human-made products, and they have human defects.

Not a single major social media platform was constructed to protect people’s privacy nor were they designed with hate speech and bullying considerations in mind. You can’t magically fix the flaws ingrained in any given platform, but you absolutely must recognize that your experience online is not the only one.

When you see people using social media in different ways, ask yourself how their decisions may be affected by how their online experience is different from yours.

3. Scaling your digital voice can be made more likely with thoughtful strategy, but it cannot be manufactured.

Stop prioritizing size, and start prioritizing efficacy. Social media environments create a constant reminder that there are people doing bigger and (sometimes) better things than you.

You’re not alone in finding yourself comparing everything you do to the accomplishments of everyone on your timeline. First, take their boasting with a grain of salt.

Second, practice using it for inspiration rather than judgmental comparison. You can learn from how they used social media as a tool to achieve their goals only if you’re able to translate it into what your goals are.

For example, the Parkland students who created March For Our Lives were thoughtful, strategic, and hardworking in their effort to change the sociopolitical consensus about gun violence. Through their work and their coalition-building on and offline, they have made real change across the country on an issue that had been stagnant for decades.

But here’s the thing: even if their work hadn’t gone nationwide and had only made it to the local paper, it would have still been worth it, and their strategy would still have been sound.

4. Just because you can post, doesn’t mean you should.

Social media platforms are incredibly useful in bringing attention to often ignored or entirely muted voices. Racial justice activists used social media to force the issue of police violence against Black people into the national discourse after the murder of Michael Brown.

I seriously doubt that would have been possible without the effective use of social media. Yet there are also countless examples of people running their mouths on topics about which they have little if any understanding.

5. Try to boost others as you find your voice and utilize its power online.

Everyone loves to talk about the power of social media, good and bad, but people don’t seem to love addressing the very real nuances of individual platforms. Be thoughtful about your use of social media and how you’re using it to accomplish your goals, especially when you want to affect change and progress.

There’s a lot of power in the effective implementation of these digital tools. And remember Uncle Ben’s challenge to Peter Parker and anyone who wants to do something meaningful: “With great power comes great responsibility.”

I’m grateful to the dedicated Webster University students, faculty, and staff who are working to make Webster realize its potential. It’s been clear to me since our first point of contact that this is not a one off box to be checked but a serious and thoughtful effort towards equity.

I’m excited for the conference, and I hope to see you there.

Integrity Drives Opportunity: It’s OK to Let Your Personal Values Influence the Direction of Your Business

Why the St. Louis Region Should be Proud of the Startup Scene (and it Has Nothing to Do with Big Exits)

Why It’s Noble to Be An Innovator