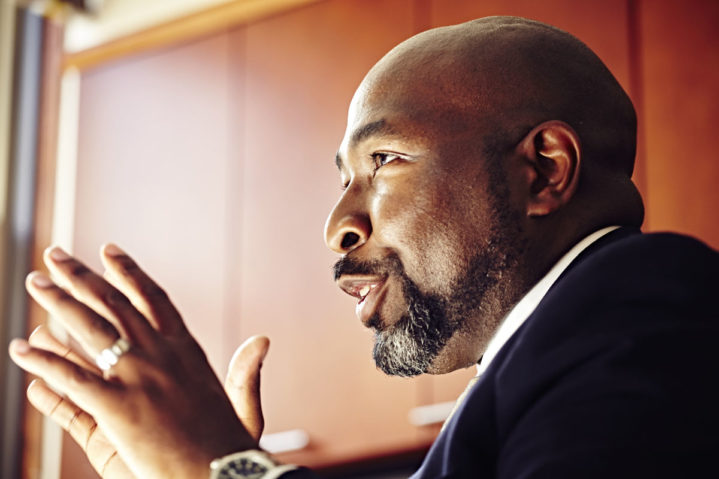 Engineer, entrepreneur, academic, father, reformed skydiver, son of a civil rights activist. Many titles can be ascribed to Dedric Carter, but as associate provost and associate vice chancellor for innovation and entrepreneurship at Washington University, his role as a leader in the St. Louis startup community is especially significant.

A welcomed St. Louis transplant from South Carolina by way of MIT, Carter is a name to know in the local entrepreneurial space. We sat down to talk to him about the role higher education plays in a growing entrepreneurial ecosystem and how he’s doing his part to push St. Louis forward.

You spent a little more than seven years at MIT. What excited you about the opportunity to come to St. Louis?

At the time I’d launched the Innovation Corps program while working at the National Science Foundation. I was on leave from MIT and I remember sitting in my office at Innovation Corps, and Desh Deshpande, one of the early funders there, said, “What are we going to do about the heart of the country?”

And I said, “You know, it’s clear that the coasts have no monopoly on good ideas. What are we going to do? How do we fix that?” And there were a couple of great candidates in my mind.

In St. Louis you can still have a great quality of life; you can work for equity. We’ve got some existence proofs here.

It has a great medical school. My wife is a physician at Washington University School of Medicine, so there were great opportunities for her, and it just sort of seemed like a great place.

We knew we were going to start a family as well. All those things led to St. Louis being a great opportunity.

What are some of the biggest changes you’ve seen since you’ve been in St. Louis in terms of the startup ecosystem?

I’ve been here two years and luckily I’ve been on the upside of what I would say is a significant shift in St. Louis. And let me be fair; that’s built on decades of foundation.

So those things don’t happen overnight. I’ve witnessed the growth of a community of people that really are very entrepreneurial, and very welcoming and magnetically attractive to other job opportunities. I think that the realization that things are happening is sort of a driving element, causing momentum to grow.

IKEA, the growth and prominence of something like Arch Grants and the tremendous opening of CIC as the only other outpost outside of Boston’s Kendall Square in the US is huge. Maybe any one of those things in and of themselves is interesting.

But when you start to pile those on, you get force multipliers that say something really special is happening. I think the challenge for us is to continue to sustain that and move it forward.

Talk to us a little bit about the F Lab.

The “F Lab” is a concept that I had. The meaning of the ‘laboratory’ part is easy: “It is what it is.”

At elite institutions, we don’t talk about failure very often. We project our most perfect selves.

And in order to do well, and to get into elite places, you have to start very early, projecting your perfect self. I teach an art engineering design class, and we talked about how the further along people get, the more expensive it is to fail.

One of my most favorite conversations occurred about a little more than a decade ago, in a room that was sort of “Vegas rules,” with someone on their smartphone who was basically giving four points as to why they should have been fired as CEO of their venture, and why they weren’t.

I could hear a pin drop during the entire conversation. I walked out of there and said, “We should do more of that.”

Right now it will be two sessions in the spring. So it’s an “Inside the Actor’s Studio” style of format, a conversation.

It’s, “Let’s dissect this failure and how you’ve recovered from it.” Most of the people we’re talking to have achieved some level of success in their lives, so when you’re saying, “No, I epically failed and it’s not in my interest to advertise it out to the world, but for the sake of education and practicing growth here I want to dissect it.

What opportunity or responsibility do you believe a university has in an emerging ecosystem like ours?

We’ve built a significant team here to address the internal needs to raise Wash U’s abilities, our activities and our outputs with respect to innovation entrepreneurship and how that spills over to the region. My colleagues Michael Kinch, Emre Toker, Jennifer Lodge and Nicole Mercer –the collection of us– really think on the policies, procedures and internal plumbing we have here that in some ways we take for granted.

That if we adjust and tweak, will make things move faster here, and as a result will open up other opportunities in the community. So I think we have to be good stewards of the fundamental knowledge we find here and be willing to work with people that want to create value from their knowledge.

We started a quick-start license here, and there’s a small handful of universities that have that. Really, it’s about lowering the barriers so people can translate the work, take some of the fruits from the large research labors and turn them into practice.

How do you think St. Louis can better retain talent from our universities?

This is a question I think about a lot. A place like Wash U attracts people from all over the world.

And, you know, a truly great institution, in addition to being attractive, has some retentive forces in the region to be able to keep people.

So there are two parts to this answer. The first, as Fiona Murray, who’s a William Porter Professor of Entrepreneurship, and associate dean for innovation and co-director of the MIT Innovation Initiative, would say, is that a truly innovative ecosystem has five components: It has great universities, and I think we have a handful of those, this one notwithstanding.

It has strong industrial ties and connections, and I think we’ve got a good collection of really first-rate industry. It has favorable governmental policies and regulations around tax credits and funding from the government and the state.

I think we’re okay there, but there’s probably some more we should do. It has good risk capital, and we know that the risk capital gap is one that we’ve got to fill.

We have some pretty good early-stage capital and with the new announcements of funds that are on the horizon, we’re starting to chip away from that risk capital issue. But we also know we can bring greater eyes on the region, so we have syndications of attractive capital from other places.

If you can build those into an environment then you’re able to succeed. So that’s the first part, using a theoretical framework.

The second part of this answer is, we have to embrace who we are and get out of who we were. And by that I mean who cares where you went to high school?