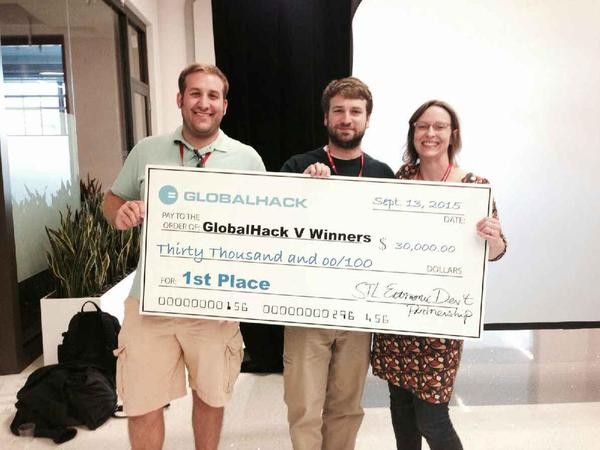 How the three-person team built a simple, visual, responsive and jargon-free website for citizens to handle traffic violations and find work exchange opportunities – in less than 48 hours.

Next time you get caught speeding in a neighborhood other than your own, you might have some helpful hackers to thank for making the payment process easier. Last weekend, developers, designers and entrepreneurs converged at [email protected] for GlobalHack 5 to help solve real-world problems St. Louis faces.

This year’s theme asked participants to tackle issues with citizen-court interactions, such as user-friendliness for residents attempting to access information or resolve cases or the overall lack of consistency in the regional municipal system.

The challenges presented were born from real-life stories from county clerks, attorneys, judges, and the public about the current regional court system and the solutions created had to service all St. Louis residents including those who might not have home Internet, smartphones or personal transportation.

By Sunday afternoon, Team Inveo, comprised of Becca Williams, Alex White and Will Stampley, took home 1st place and the $30,000 check. We got a chance to catch up with the members of Inveo to talk more about their winning solution and GlobalHack experience.

How did you three come together to form Inveo?

Becca Williams: Alex and I worked closely on a project at RGA (Reinsurance Group of America – I’m a permanent employee and he’s here from Daugherty) for the last year or so.  Alex knows Will through Daugherty.

I convinced Alex to join me for GlobalHack IV and he convinced Will. We gelled and decided to try it again.

One aspect of your winning plan that set you apart was the added ability of companies being able to essentially “pay off” a citizen’s ticket with service/work hours. How did that idea come about?

Will Stampley: Honestly? It initially came from ignorance of the existing workflow for doing community service for a violation. When we started working through options, I didn’t even know there was already a way to get fines converted to community service by a judge.

The idea originally generated as a way to digitally track non-profit/government opportunities to work off fines or other civil fees (like property taxes, registration fees, etc). I had it in my head as a sort of, “backwards Kickstarter” where you would have some event or initiative, and “volunteer” levels, that had different requirements in terms of skills or time, and different thresholds for the types of violations or amount of fines they would cover.

In a conversation with one of the civil resources from GlobalHack who has law experience, the idea of expanding to any approved sponsor was brought up, and it stuck. It seems far more likely to get the system in place – at least initially – with municipalities if they were still getting their fine money from somewhere.

Eventually, possibly, it could be moved away from fines. It’s my personal opinion that the end goal of victimless civic violations should be civic service, not revenue.

Once we had the idea in place, and learned about the existing community service option it seemed unfair (as to what the cut-off for “financial hardship” is) and late in the cycle (i.e. you get told if you can do community service at your court hearing). Our solution didn’t have either of those concerns, so we pushed on with it.

Give me a rundown on the weekend and how it unfolded for the three of you.

Becca Williams: For the first couple of hours Friday evening, we mixed and mingled, ate dinner and did a bit of searching for a civic-minded individual to join our team. We almost merged with another group, but decided to stay super lean.

Once the use cases were announced, we discussed which stories to tackle and started whiteboarding. We defined our core features and our stretch goal.

Alex and Will worked on the tech stack and I started to map out our screen flow. And then we got to building, tackling one chunk of functionality at a time.

Music was on for much of the time and if you walked by our space, you were likely to find us singing along with various tunes on Pandora.

Will Stampley: We had a pretty good system where Becca would go get some sleep, Alex and I would throw some more code out there and then go sleep. When we got back, she would have gone through our stuff and let us know what we needed to focus on to finish those parts up. It made refining things Saturday/Sunday morning a lot easier.

Alex White: I ran into the issue on integrating the provided map data. This really hindered progress for several hours and things were beginning to look gloomy.

Once the hurdle was jumped, I think we all felt like we had some momentum. Will and I powered through that night until about 5am Sunday morning.

While we had made a lot of progress, we were feeling gloomy about the possibility that we weren’t going to make it to the end with what we hoped would set us apart (the part about the sponsors providing alternative ticket payment options).

After a very brief three hours of sleep, Will and I got back around 9am to join Becca for the closing sprint. And sprint we did.

Becca had vetted out what we had done thus far and provided feedback/bug reports to us. We were able to accomplish all of those line items in addition to about five new screens of functionality and workflow getting us right where we had hoped to be by about 12:30pm on Sunday.

I feel like this was truly a race to the finish line and that our efforts on Sunday “sprinting” to the end ultimately decided our fate.

Becca Williams: Spark! rocked the house. When I saw what that group accomplished, I wondered where we would land.

When they were also announced as the third-place Pro-winners (well-deserved), I wondered if that might have knocked us out of the race. Second place was announced to The Foot, and Eleanor mentioned how excited she was to reveal first place… And it was Team Inveo.

What was the most enjoyable part of the experience?

Becca Williams: It’s so hard to narrow this down into a concise answer! So much learning and self-awareness and connecting with like-minded, creative ideas people.

The collective energy and power of a large group of people dedicated to solving an important problem with limited time and resources and the greater application of that mindset to our corporate lives. And my teammates, of course, who are completely awesome.

Alex White: I keep reflecting on the fact that we truly felt like a “well-oiled machine.” We knew each others’ strengths and responsibilities, we stuck to them and just produced a ton of quality functionality in a short amount of time with such a small team.

Will Stampley: It’s a motivated learning experience. That’s the part I liked the most.

Will you be coming back for GlobalHack 6?

Becca Williams: We’re meeting for happy hour later this week, so we’ll let you know if we’ll be coming back. Next year’s million-dollar prize is definitely appealing (we’re grateful for our winnings this time around, of course).