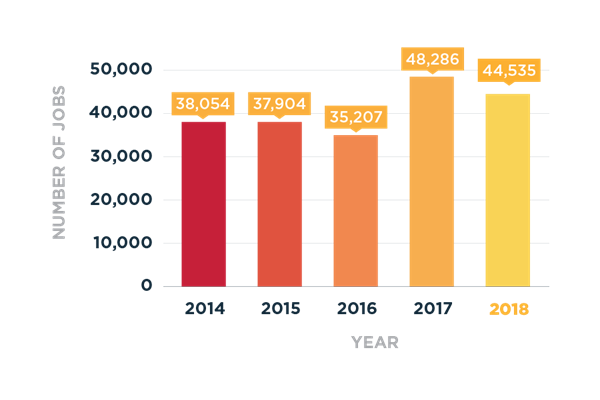 Missouri startups account for nearly 80% of all new jobs.

Headlines often boast of companies coming to Missouri and opening their doors to anywhere from 300 to 1,000 new employees. But how do Missouri startups impact our economy?

Today, MOSourceLink released Show Me Jobs, a new report that, for the first time ever, tracks jobs created by new and young establishments across the state of Missouri.

“We first tracked this number for Kansas City startups in 2016. Now, we’re excited to report on the economic impact of Missouri’s entrepreneurs, across industries and across the state,” said Maria Meyers, founder of KCSourceLink, MOSourceLink and vice provost of economic development at the University of Missouri-Kansas City.

“We want to make Missouri the state for innovation and entrepreneurship between the coasts,” says Alexces Bartley, network builder for MOSourceLink.

“To do that, we have to be able to tell a compelling story of economic impact. Show Me Jobs helps us do that by quantifying how startups fuel our economy and giving us the opportunity to have meaningful, data-guided conversations around how—and where—to grow those numbers.”

Missouri startups account for nearly 80% of all new jobs.

In 2018, Missouri startups—defined in Show Me Jobs as first-time employers with fewer than 20 employees—created 44,535 jobs. From 2014 to 2018, the cumulative job-creating impact resulted in 190,764 jobs, accounting for 78 percent of all new jobs and 7 percent of the total employment.

“MOSourceLink’s Show Me Jobs report makes it clear that entrepreneurs are a critical part of the economic vitality of Missouri,” says Mun Choi, president of the University of Missouri System, one of the sponsors, along with the Missouri Technology Corporation, of MOSourceLink. “We should be grateful to these entrepreneurs for the companies they build, the people they employ and the innovations they create, and we—leaders from education, government, community and corporations—should do everything we can to support their success.”

Show Me Jobs quantifies the impact of new and young firms to Missouri’s economy. Using data from the Quarterly Census of Employment and Wages (QCEW) for Missouri, MOSourceLink used a statistical analysis to calculate the number of jobs from first-time employers by looking at employers who paid for unemployment insurance for the first time. MOSourceLink further sorted that number to include only those employers with 20 or fewer employees.

In addition to jobs created by first-time employers, the report also provides year-to-year comparison data regarding job creation by new and young firms and by the tech sector as well as wage growth, the industrial density of startups and the geographic dispersal of Missouri startups.

Connecting the data from Missouri with the existing theory pertaining to entrepreneurship is a positive step in supporting economic development leaders in their quest to boost economic activity.

“Homegrown companies, as research and history have shown us, are critical to the long-term growth of communities, large and small, rural and urban, throughout Missouri,” says Jason Hall, board chair of the Missouri Technology Corporation and CEO and co-founder of Arch to Park LLC. “Fostering their growth is paramount to the future of our great state—and this report helps us put that impact and our next steps in context. We need to work together to nurture the startups of today that will create the jobs and innovations of tomorrow.”

Further highlights from the report (available for download at mosourcelink.com/jobs) include:

Axiom Conquers the World from O’Fallon