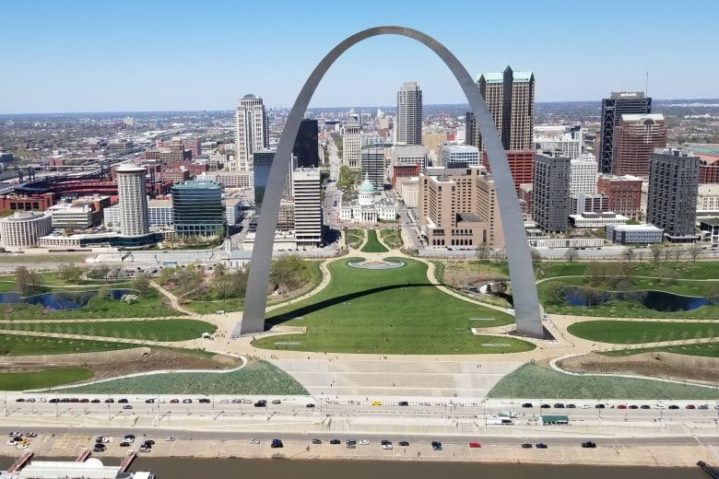 Just in time for the 4th of July and Fair St. Louis, the City unveils the new and improved Gateway Arch Museum and Visitor Center today.

The new park grounds, museum and Arch renovations represents decades of planning and years of design and construction and $380 Million in public and private funds. A politician-studded cast presided over the ribbon cutting with remarks from Governor Mike Parson, Senators Claire McCaskill and Roy Blunt, Mayor Lyda Krewson and County Executive Steve Stenger among others.

For those willing to walk the 96 steps, the tram rides are running once again offering up a 63 story-high view stretching up to 30 miles to the east and west. A centerpiece of the Park is the new museum, which offers a deep exploration of the American West with interactive story galleries guiding visitors through time, from the mid-1600’s to the present.

The grand opening also coincides with the return of Fair Saint Louis to the Gateway Arch National Park, which during construction was hosted in Forest Park. For many, this alone is enough to rekindle the nostalgia of humidity-soaked nights, concerts, glow sticks and the “oohs and ahhs” that inevitably accompanied the hours-long firework displays tens of thousands from the region came to see annually on the riverfront.

“We picked Olio City to produce the video for a couple of reasons,” says Brian Hall, Chief Marketing Officer at St. Louis Convention & Visitors Commission; “they have a track record of creating enthusiasm and driving attention to events happening in St. Louis, but also because we see the Arch as a metaphor for the kind of innovation happening here. So, when we wanted to chronicle one of the biggest things happening in the City in decades, it made sense to include a number of prominent St. Louis personalities and entrepreneurs like Travis Sheridan from Venture Cafe and Jim Edmonds from the Cardinals.”

“We’ve moved to creating content for a variety of Midwest-based clients, and it was exciting to work on such a significant project for the City,” says Ellen Prinzi, founder and CEO of Olio City.