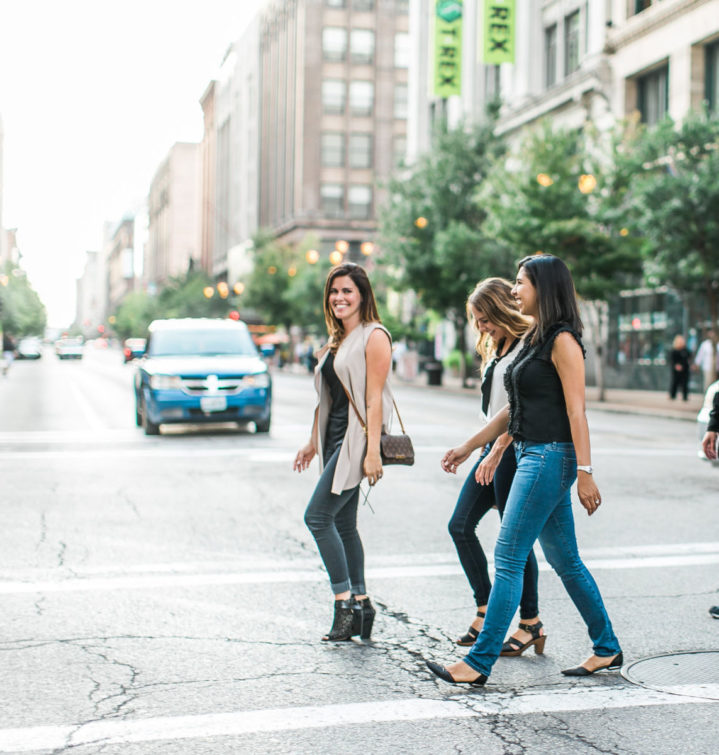 How a trip to London that never happened led Ellen Prinzi straight to a problem worth solving.

It’s not often that you find a word for exactly what your new startup is trying to do, but “olio” was the perfect name for Ellen Prinzi’s new company. Meaning “combination,” the word encapsulates Prinzi’s dedication to combining city discovery into one place, and she launched Olio City as an online platform and app to give users the power to discover a new city in their own way. The platform went live with St. Louis as its first city in April 2015.

“The idea was born out of a pain point I had while traveling and trying to get to know a new city or even my own,” says Prinzi. It was a trip to London that really catalyzed her idea in the fall of 2014. “I was spending countless hours searching for the best things to do and was becoming increasingly frustrated with the lack of easy-to-digest information,” Prinzi says. “The number of sites I was visiting to piece together and curate the kind of vacation I wanted seemed ridiculous.”

So she began researching. Where had similar companies failed? What models were they using? Another big hiccup she found: The No. 1 place people go when planning a trip or a night out is a search engine, she says, which means “the users are left at the mercy of SEO and sorting through pages and pages of results.” And then there’s the overwhelming amount of info on review sites like TripAdvisor and Yelp: “There’s so much data to sort through to arrive at your answer,” she says.

Prinzi never made it to London after all—she was too excited to get going with her startup.

Her research led Prinzi to the solution that would launch her startup: “We offer custom curated content around the best a city has to offer in events, restaurants and guides and personalize the results to each user.” That means that not every single restaurant will be listed–only the best of the best. “We only feature a limited pool of high-quality places and experiences, not every single option,” says Prinzi. After all, “the St. Louis you want to discover is different than the St. Louis I want to discover.”

That leaves Olio City in a unique—and powerful—position: “So far Olio City is the only company that makes recommendations off personal preference and uses a database of only high-quality local businesses,” says Prinzi.

The target is a highly mobile group: Although Olio City targets millennials and late GenXers, it’s the post-college millennials (ages 22-30) that are the most active. “This age group generally has disposable income, they are going out every weekend and value experiences over material things,” says Prinzi.

Curating multiple cities’ worth of the best of the best seems like it would take an army, but Prinzi has four full-time employees (apart from herself) and a few part-time freelance writers. “Our dynamic is simple: work hard, innovate and have fun,” says Prinzi.

Managing wasn’t always easy for Prinzi—not that she’s alone in the entrepreneurial world in finding that a challenge. “I struggled in the beginning to create a culture, and I quickly found out hiring for the culture you want is one of the most important things a founder or CEO can do to impact the long-term success of the company,” she says.

“On a personal note, the hardest part for me has been being able to juggle starting and running a business with being a wife and a mother,” adds Prinzi. “Talk about needing a PhD in communication.”

Now, with more than a year and a half under Prinzi’s belt, her team’s challenges are met with enthusiasm—”We love solving a problem that hasn’t been solved yet!”—and she looks beyond the bottom line to create a culture focusing on the human side of work. Trust plays a big part in the company’s dynamic: “Being a travel app and having a presence in three cities mean communication and trust between the remote team has to be top of mind every single day,” she says.

Prinzi has also learned that failure and success aren’t just about a bottom line. It’s “about growing as people and expanding our skills alongside each other with a common goal.”

Since launching last spring, Olio City has continued to grow. After St. Louis went live, the company added Chicago in 2015 and is targeting Nashville for a launch in January—with four more cities to come online in 2017. Prinzi is especially excited for the latest addition: “Nashville’s one of the hottest travel tickets in the country right now, with a lot of that coming from the Midwest,” she says.

In the meantime, she’s keeping her ear to the ground. “The most important thing is listening to our customers,” Prinzi says. “We developed our product and got it to market last spring. Since then it’s been about giving our users and business partners what they want.”

So far, so good: There’s a “very large partnership in the works,” and Olio City has raised $500,000 to date, receiving matching funds from MTC. Its current funding round is 25 percent filled, and they plan on using that money to expand even further.

By 2020, Prinzi hopes expansion will be exponential as the startup works to crack into the top 40 or 50 travel markets in the US. She’s also keeping an eye on the long game: “I think the market need for what we are doing is even greater for international travelers finding good information in countries where English isn’t the native language, but my short-term goals are all with scaling this domestically.”

But it’s not all about the tourists: Small businesses stand to gain from the app in more ways than one. Besides launching foot traffic generated by visitors using Olio City, the start up also creates a way for small businesses to share their stories and get their message out to both locals and travelers.

“The best part of this company has been seeing our users discover their own city through eating at new places or discovering cool events—and, on the flip side, seeing how the businesses benefit through increased traffic and awareness,” says Prinzi.