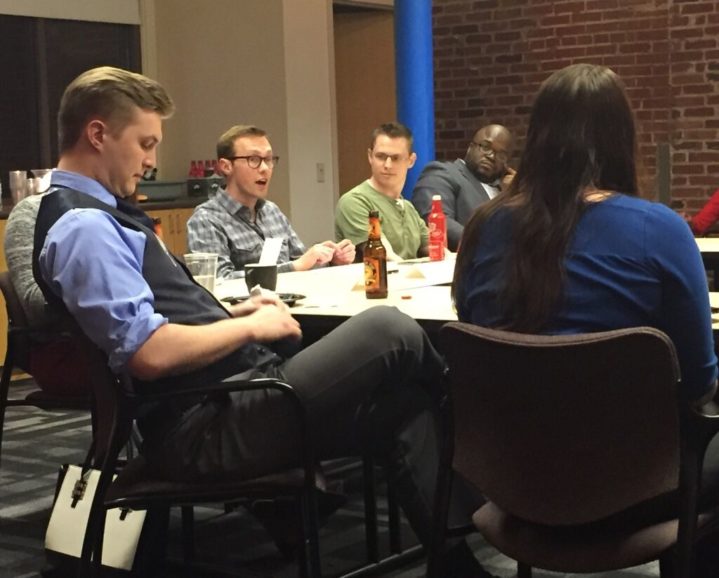 Where to Pitch: House of Genius

As a partner and managing member at Matter Family Office, Whitney Kenter travels often for her work as she helps entrepreneurial families navigate their wealth. One trip that proved fruitful for the St. Louis community was a visit to Matter Family Office’s Denver location in early 2015, where she was introduced to House of Genius. 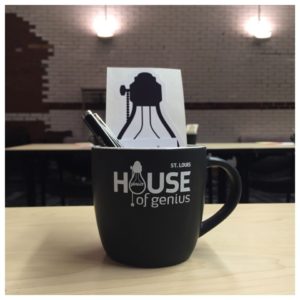 House of Genius is a monthly meeting where both entrepreneurs and a diverse mix of collaborators from the community come together for disruptive thinking, supportive input and creative new ideas. Kenter, familiar with the growing St. Louis startup ecosystem, knew it was the perfect souvenir to take back to St. Louis.

“I’m always looking for ideas to bring home to support the growth in innovation and entrepreneurship here,” she says. “House of Genius seemed like a fantastic way to broaden the exposure beyond the ‘usual suspects’ and grow the community here in St. Louis.”

Kenter’s next step was to reach our to Phyllis Ellison, director of entrepreneur services and institutional/corporate partnerships at Cortex. She agreed that the concept fit a need in the region.

They spoke with national House of Genius organizers who told them they’d need sponsors, community volunteers and a location to hold the meetings—three things the pair had no issue gathering. Matter Family Office agreed to sponsor, Kenter became city director and Ellison was ready to organize along with regional leadership and Cortex provided the location.

“In a matter of 24 hours we went from, “great, this is a cool idea!” to “When can we launch?” says Ellison. She and CIC’s Dougan Sherwood attended a House of Genius in Boulder in April, and by August 2015, national House of Genius leadership had arrived in St. Louis for the launch.

House of Genius’ format centers around problem-solving. Not an informational pitch, nor a money ask, but an ask for advice on a specific problem or decision point a company is exploring.

Ellison likens it to a focus group mixed with a mentoring session. One that is aided by anonymity: when the 20 participants meet at [email protected] each evening, it’s first names only and there is no talking about your professional background at all. 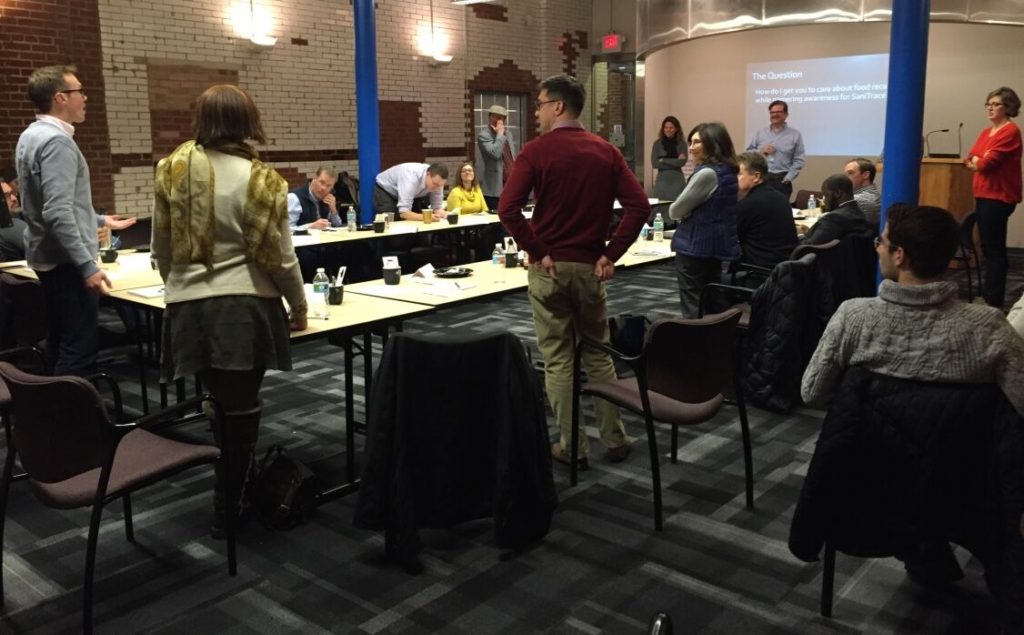 “That sounds easy, but when you start doing that, introducing yourself, you look at each other and think, man, what do we talk about?” says Ellison.

“At first it’s a little awkward for people because they realize they fall back on that, “What do you do? Who do you work with?” chatter. To move out of that is a bit of a challenge; but what we’re trying to do is get people to know who everyone is, not just what they do.”

At each event, three entrepreneurs present for 45-50-minute sessions each. During that time the entrepreneur will give a five-minute talk on their business and what their current issue or decision is. The rest of the group asks any clarifying questions, then the entrepreneur takes a seat and everyone in the room gives their immediate reactions. 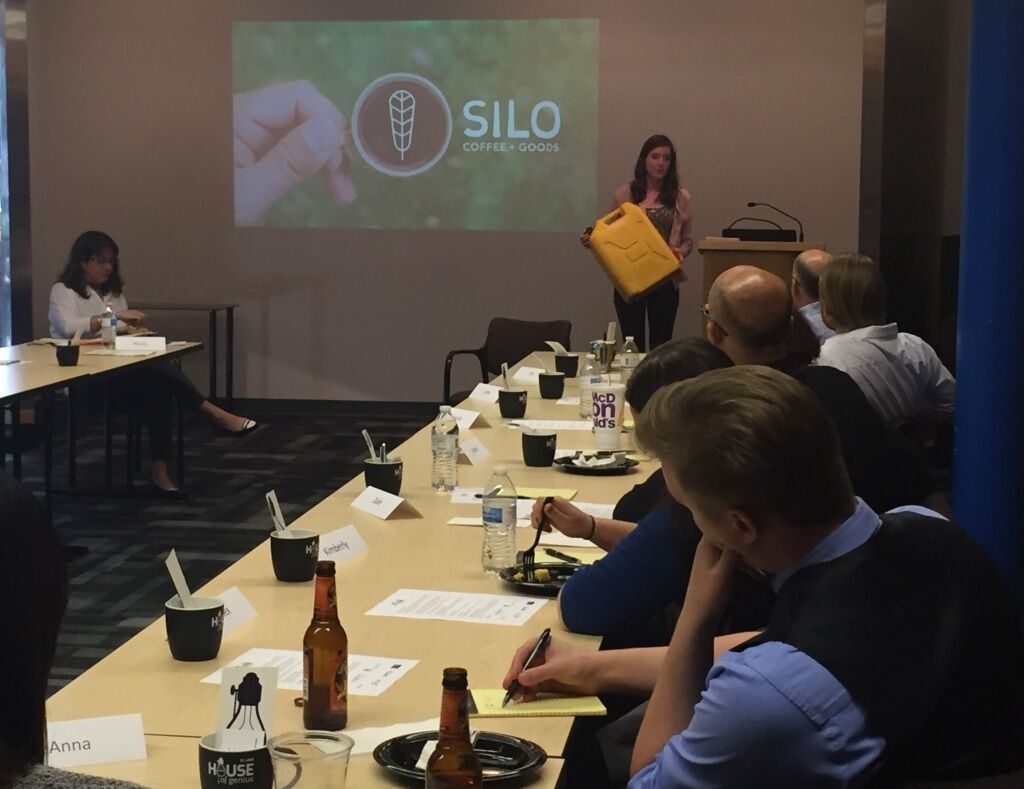 “Everyone in the room participates. It’s not just the 2-3 people in the room who like to talk a lot,” says Ellison. “And everyone has something to contribute. It might through a professional background, it might be from a hobby or something you do on the side, or it might just be from the perspective of being a consumer.”

This process opens up a dialogue that’s different for each presenter, and in turn, different each month.

“Sometimes there is a clear theme that the whole group agrees on, or there might be two or three different responses that might not agree with each other,” says Ellison. “But oftentimes the dialogue gets down to root causes, which might not be what the entrepreneur came in thinking they needed to focus on.”

At the end of the evening after all three entrepreneurs have presented their problems, full introductions are made, dubbed The Reveal, and then the group heads next door to Scottish Arms for post House drinks and discussion. 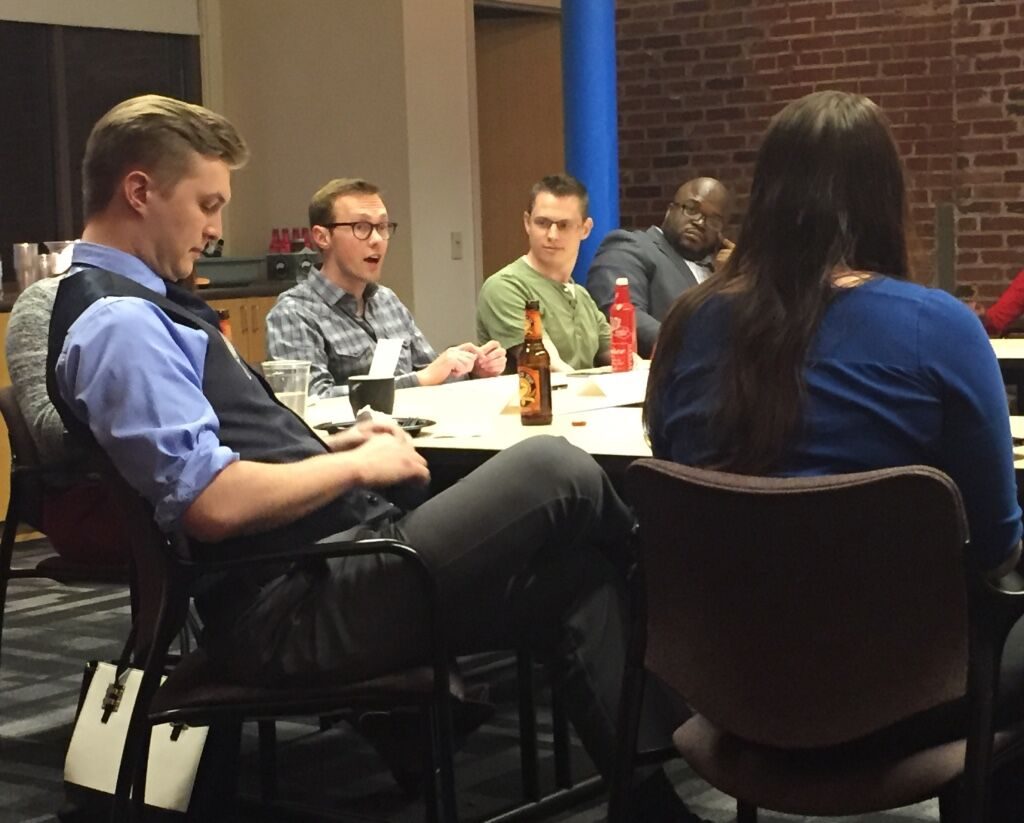 Is House of Genius Right for You?

If you’re interested in presenting an issue, House of Genius is open to a lot of business and organizational formats.

“We like to have companies that are in the marketplace or very close to it, from a perspective of an IT company you’d want to be in a beta stage.” says Ellison. But she also said they’ve attracted main street businesses, non-profit or community projects as well as companies that are a little further along.

“We’ve had companies who have been through accelerators and through some of the support programs and they’re almost on the other side of it. They don’t have access to that mentor pool as much anymore so it’s great for them to step back in and have that support source at a time when they need it.” 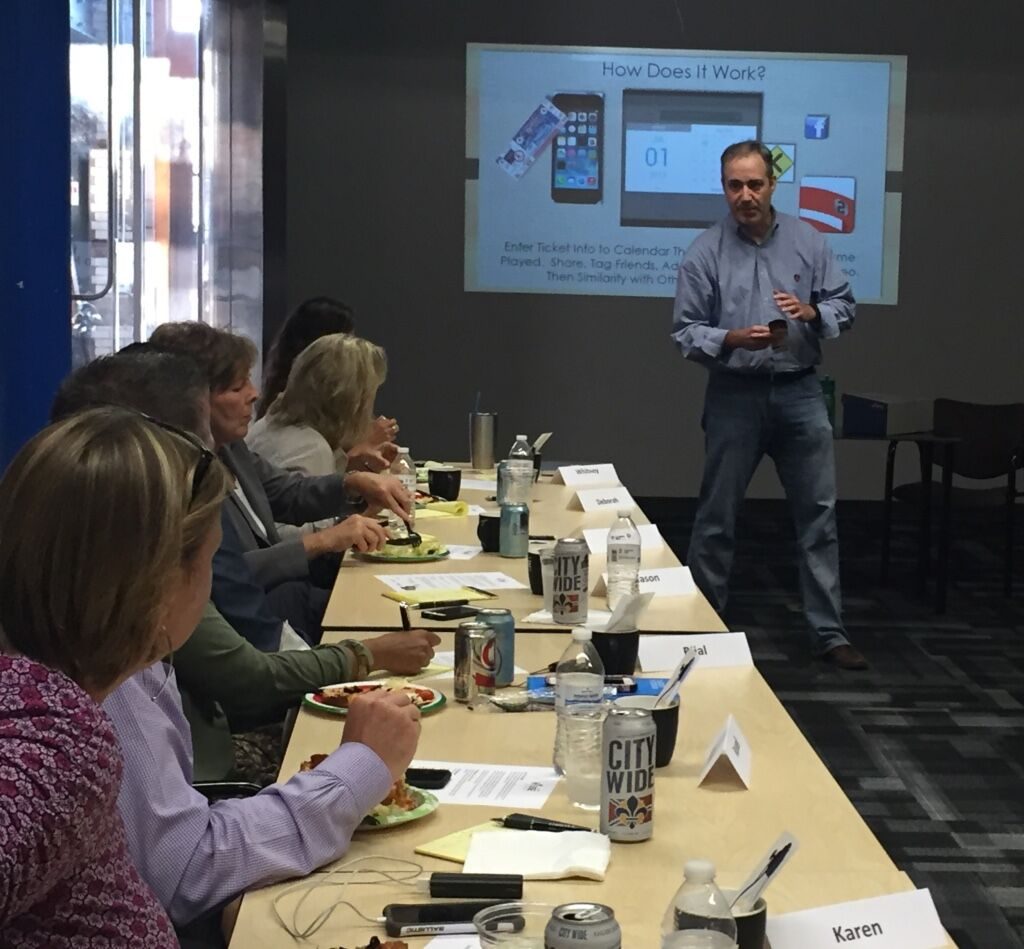 As for the other 17 people at the table not pitching a problem, House of Genius is about community building, not networking.

“We try to curate the room to gather people who have some insight to one of the presentations in some way, but also people who don’t know each other—which can be a challenge in St. Louis.”

Diversity of thought is the goal, which includes diversity of age, background, gender, race and zip code—pulling together a much broader pool than entrepreneurs normally meet.

Ellison said they’ve heard feedback of group members later working professionally together or realizing that they live in the same neighborhood.

“Most people in St. Louis want to get outside of their bubble, but they don’t know how. This is a great way to get people together with a sense of purpose and they participated in something meaningful, but it’s a low time commitment—just one evening.”

What’s Next for House of Genius

As the organization celebrates it’s first year in St. Louis, Ellison, Kenter and the rest of the organizers have organized an Anniversary Party this August 25, inviting all past House participants to come back together at Filament Downtown.

“We’ve been working hard to figure out how we take that connection that happens in each session and help continue to nurture and grow that, so it’s not a one time thing.”

And though St. Louis is one of the newest locations, it’s one of the ones furthest along.

“We’re very excited about the progress we’ve made, our volunteer group is wonderful and I give great credit to them,” She says. “They’ve allowed us to accomplish a lot because they believe in this idea of putting people together in a different way.”

If you’re an entrepreneur interested in pitching, or a community member looking to get involved, apply here. *Note, because of the curated nature of House of Genius, it might be a few months before you’re asked in, as volunteers work to make sure each month gathers a group of unique startup, corporate, creative and civic community members.