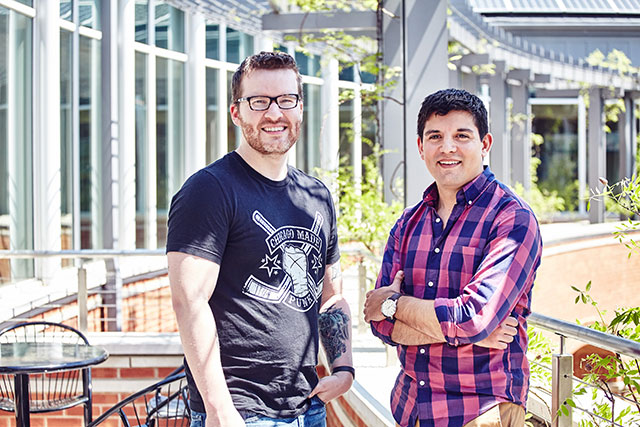 How GlobalHack is working to keep the next generation of entrepreneurs right here in St. Louis.

During the weekend-long competition, Sauer’s team built a program to help people understand government fines and how to address them—taking the top high school award and third place overall. Their project underscores two of GlobalHack’s recent objectives: encouraging St. Louis’ youth to learn how to code and building products that solve real-world problems.

GlobalHack was founded by three local entrepreneurs: Juristat’s Drew Winship, Venture Café’s Travis Sheridan and LockerDome’s Gabe Lozano. They had a clear goal in mind: Creating a tech culture that centers on products and talent—not companies. To grow as a leader in tech innovation, St. Louis needed a healthy talent ecosystem that pointed entrepreneurs toward products first, not funding.

So how do you prove to programmers looking to be the next Steve Jobs or Jack Dorsey that their first step shouldn’t be writing a pitch to catch venture capitalists’ attention? In 2013, GlobalHack decided that providing teams of talented people the opportunity and resources for rapid product development in a hackathon format might be the key. Hackathons are multi-day events where teams of designers, programmers and entrepreneurs rapidly develop their product idea into a functional prototype. Teams are pushed to get a product to market during the event so they can get feedback from both mentors at the hackathon and customers in the marketplace.

“We wanted to change the culture around how to start a tech company,” says Matt Menietti, executive director of GlobalHack. “Founders don’t need to obsess over writing the perfect business plan. Instead, the focus should be on building products and getting them into the market. If we can get more entrepreneurs to transform their ideas into functional prototypes, the tech community will benefit because we’re going to produce more viable companies in our ecosystem.”

From GlobalHack’s perspective, a healthy tech ecosystem needs three ingredients: a steady stream of skilled talent, a culture rooted in building actual products and a density of smart people with systems that help them succeed. With the hackathon program already addressing two parts of that puzzle, this year’s GlobalHack is turning its focus to creating a feeder system to engage young people in computer science and give them the tools and opportunities they need to develop.

Menietti sees a parallel between what the St. Louis Cardinals have done with their farm system and what GlobalHack looks to do with their youth initiative. Following the ‘coding as a sport’ outlook, GlobalHack will launch a formal league in the 2017-2018 school year, using competition, coaching and skill training to enable young coders to become the rock stars of St. Louis’ next generation of tech talent.

Leading the charge is Michael Palmer, who joined GlobalHack this year after founding Code Red Education in 2013, a company that helps schools get the resources they need to teach programming skills to their students. An educator for 13 years, teaching from kindergarten through college, Palmer has a knack for explaining computer science in an accessible way, like using penguins to describe cybersecurity and insects to talk about the behavior of malware and data collection.

“I love the idea of looking at the world as this kind of beautiful contraption that we created,” says Palmer. “And that’s what tech allows us the ability to do. We can create things; we can master a space, alter it and develop it.”

Palmer sees real, practical opportunities for students in learning how to program—as well as a wealth of untapped potential just beneath the surface.

“We get told, ‘Tech is the new foreign language. The world is made of code,’” Palmer says. “No—what’s amazing about it is that it’s like telling somebody, ‘Hey, there’s a gold deposit 100 feet from you, and you only have to dig a foot down, and you start seeing gold right away.’ That’s how readily available it is.”

A Vision for the Future

As GlobalHack builds its competitive coding league during the next few years, it will forge relationships with schools and communities and expand programs designed specifically for students, including youth hackathons and code nights. But measuring success remains complicated, because unlike baseball farm systems, there aren’t stats to prove the impact. Instead, GlobalHack must track participants and keep an eye on how many students stay in the computer science field to gauge the effect their efforts are having. The markers will largely be anecdotal and cultural, but the student who stays after school to learn how to write back-end systems in Python and the entrepreneur who pulls all-nighters to ship a working prototype will impact the tech culture more than hard numbers ever could.

For more on GlobalHack, check out “A Million-Dollar Idea”.