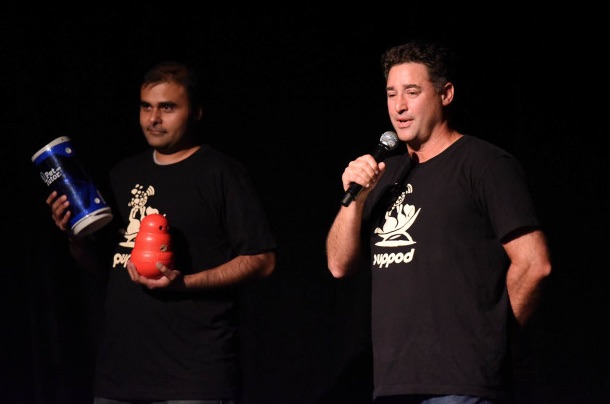 PupPod Wants to Make Your Dog Even Smarter

More than a few viral videos concern exactly what it is pets do when their owners take off for the day. But PupPod knows that Fido can do more with his day besides take his sixth nap: with PupPod's learning toys, the company believes, Fido can actually put those hours to use getting smarter.

More than a few viral videos concern exactly what it is pets do when their owners take off for the day. But PupPod knows that Fido can do more with his day besides take his sixth nap: with PupPod’s learning toys, the company believes, Fido can actually put those hours to use getting smarter.

“The philosophy is that we’re building products for dogs to learn and enjoy life,” says PupPod co-founder and CEO Erick Eidus. “Millions of dogs are left alone each day while their parents go off to work, and with better products that leverage technology, we can build more interesting products for the dogs we love.”

But to get a dog to think, you have to think like a dog. The idea bubbled up when MS Kinect came on the scene. “I thought, ‘Could a dog play a video game?'” Eidus says.

“This was a terrible idea, but got me thinking and asking a different question: what would a computer look like if a dog invented it?” This became the driving force of PupPod’s genesis: “We put ourselves in the paws of a dog and try to invent what a dog wants, rather than trying to push products and technology designed for humans on to dogs.”

In Eidus’ estimation, wearable tech won’t just be for humans soon. “It is inconceivable to think that dog products won’t be connected to the internet over the next 10 years,” he says. “That requires hardware, software, intellectual property, and thinking about user experience in a very different way. We are building the early versions of dog computers.”

The name is a portmanteau of a playful name for a dog and a “generic term for a thing,” says Eidus—like, say, an iPod. And just like the industry-changing, computerized music playback device, PupPods are actually computers, too. Just, well, for your dog. “That might sound crazy, but that’s where we’re going,” Eidus says.

Drawing from a vector of complementary trends (dogs as substitutes for kids; pet owners as parents; millennial pet ownership; and the changing ways we view how smart our pets are) PupPod’s current form is both tangible and intangible, accessible for dog and human.

It “provides increasing challenges for dogs, uses software and hardware to create user experiences that can’t be duplicated with plastic toys, and collects data on how a dog is learning,” says Eidus. Pet parents also have access to an online community.

Eidus’ offers his own dog’s behavior as a testimonial to the powers of PupPod: “Yesterday my puppy played PupPod for one and half hours straight. He ate one and a half cups of food which is a normal meal portion. It kept him out of trouble, he was having fun, his brain is getting exercise, and he was exhausted. I was able to work for three hours because he slept for one and a half hours after playing.” 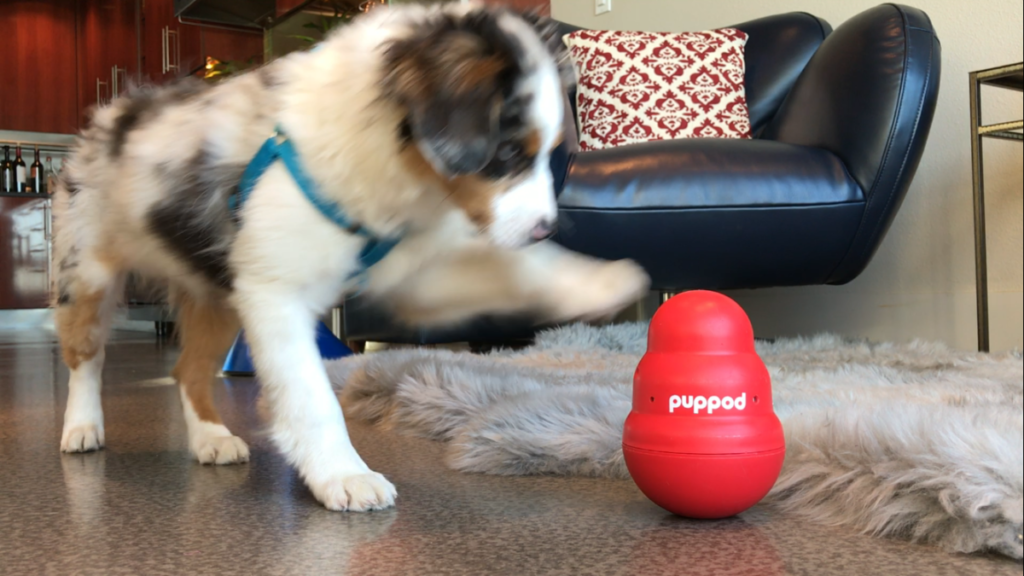 PupPod’s CEO is no stranger to pioneering technology: Eidus spent much of his early career building what would become known as smartphones and then ran his own consulting business for 12 years. Co-founder and CTO Kardarp Jani and engineering lead Aman Pervaiz have also built platform and device software for messaging, transaction systems, gaming and other purposes.

Together, the three of them work to challenge each other and grow the company. “We have a high level of trust with each other, but push each other to question assumptions,” Eidus says. “I’ve worked with a lot of people, and [this] team dynamic is special.”

An additional 20 to 30 people help PupPod fulfill its deliverables. There’s not yet a lot of competition in this emerging field.

“The product category of Internet-connected smart puzzle toys for dogs is just forming,” says Eidus. “It’s like asking Steve Jobs if the Apple IIe had any competitors. What do you compare the Apple IIe too?”

Only one company comes close to competing —CleverPet— but its approach is different, says Eidus, who views PupPod and CleverPet as the Apple and PC of the smart dog toy industry. Although he sees PupPod as superior in strategy and product, he thinks of the two companies as working together to legitimize the new product category.

Only a fraction of dogs receive the resources to be service dogs and learn throughout their life, but we can use technology to build better products for dogs so all dogs can reach their full potential and teach themselves new skills,” says Eidus.

PupPod’s first version took between a year and a year and a half to build and began with a Kickstarter. Not unlike a few campaigns, the platform was also a crash course in marketing and deliverables. Reflecting, Eidus realized the initial campaign had too many options, lacked emotion, had way too much new stuff, and wasn’t emotional enough.

The second go positioned PupPod as a service for doggy daycares and boarders. Although the response was good, the business model was too complicated, Eidus says, and the super-targeted nature of the concept proved challenging.

So the company pivoted. PupPod’s second incarnation takes lessons learned into account. “We’ve made a major change to the product configuration by turning the hub into a mobile app and making the treat dispenser optional,” says Eidus. The move has brought the entry-level price down from $500 to $179 and allows them to get on board with the rise of app-controlled products.

Currently, it’s targeted toward trainers. They immediately grasp the benefits of the product, Eidus says. But ultimately he wants to target pet parents who think of pets as a member of the family: a loved one to grow, teach and nurture.

“The biggest lesson we learned that drives many of our decisions is to prototype fast, get feedback and improve,” says Eidus. “We also prioritize high variable cost/low capital over the other way around.”

PupPod has had several big wins to date, each of which help to legitimize the concept and product field. In early March, the company made CB Insights list of 70 companies targeting the pet industry with tech, alongside names like BarkBox and Chewy.com.

It was also recently a finalist in the Pet Care Innovation Prize, sponsored by Purina and Cultivation Capital. The product also sold well at ClickerExpo, a conference that focuses on dog trainers—so well, in fact, that PupPod’s first production run is almost sold out. A second is in the works and due to ship at the end of the month.

The products we’re building are going to change the canine industry,” says Eidus, adding that with PupPod, we’ll soon see “dogs who will be able to learn new things, be smarter, live longer lives—because of the data we’ll collect—and reduce behavior issues from dogs being misunderstood.”