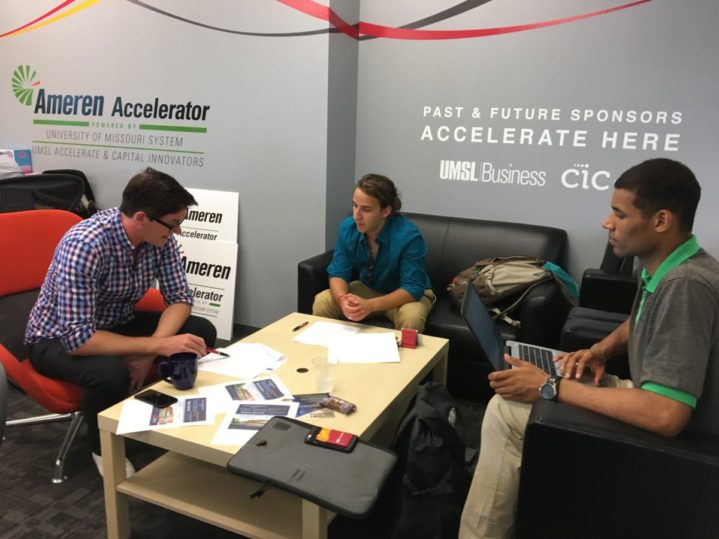 Programmed by the University of Missouri System, UMSL Accelerate and Capital Innovators, the Ameren Accelerator program is the first of its kind.

The 12-week program not only has been a boon for entrepreneurs and the seven cleantech startups in their cohort, but also has made a tangible difference in the day-to-day work being done at Ameren, an energy utility company.

Warner Baxter, Chairman, President and CEO Ameren Corporation, talked to EQ about why the program was the right fit for the energy utility company, and why the time is now.

“What drove us to create the Ameren Accelerator and partner with startups is the same thing that has driven our company for more than 100 years: a focus on innovation and a desire not just to meet customers’ growing needs and expectations, but to stay ahead of them,” said Baxter. “We’ve been innovating at Ameren, on behalf of our customers, for more than a century. But as technologies continue to advance, we already are witnessing dramatic changes to our industry, and this trend is likely to continue into the foreseeable future.”

“To stay ahead, we set a goal three years ago to take a leadership role in the innovative technology space,” said Baxter. “We didn’t want to just adapt to the changes that are taking place in our industry, but rather to lead the transformation to deliver benefits to our customers. Simply put, we choose to lead today to transform tomorrow.”

While the term intrapreneurship often implies spinning off an internal department or in-house software into a separate company, that’s not the plan for companies in the Ameren Accelerator program. The term is still apt, however, in describing the impact that closer collaboration with startups is having on the day-to-day business of Ameren.

“A logical step in taking on this leadership role has been to engage and interact with entrepreneurs and innovators through programs such as the Ameren Accelerator,” said Baxter. “Working with these startups, we believe, will not only drive innovation at our company, but also help foster a culture of innovation that will continue to generate new ideas and solutions for our customers as well as attract and retain top talent.”

Through the twin spirits of digital transformation and intrapreneurship, Ameren can achieve its corporate mandate to proactively solve corporate challenges more creatively, faster, and with a higher tolerance for experimentation. Ameren’s startup liaison teams are collaborating with their cohort of tech companies to solve unique energy industry challenges that present win-win opportunities for all parties. The chance to actively foster a culture of innovation at Ameren is keenly recognized by Baxter.

“For Ameren, partnering with startups is not just about the individual innovations and technologies we explore together,“ said Baxter. “Equally important is the opportunity for all of us at Ameren to gain exposure to different approaches and unique mindsets embodied by these entrepreneurs and innovators.”

Cara Dolly, the Energy Efficiency Program Development Manager at Ameren Missouri, is working in the accelerator program as one of Ameren’s liaisons to the startup teams. She has been working within the utility environment for over 30 years, with the last 10 years spent in energy efficiency .

She especially enjoys her role at Ameren, as it’s all about the pairing of technology and people — more specifically, she is responsible for pairing customers with right-fit solutions.,

“Participation in the accelerator program has been the best of that combination,” said Dolly. “It is so nice to be able to get out of the daily grind and help companies grow and work on these innovative ideas.”

Dolly’s role as a liaison to the entrepreneurs in Ameren’s program has prompted Capital Innovators, Ameren, and the startups to embrace many of UMSL’s core values and principles of entrepreneurship, including fail fast, rapid prototyping, and the development of minimum viable products.

It’s this rapid cultural evolution that has made her work with U.K. internet of things (IoT) company WIFIPLUG so invigorating. Dolly facilitated a cross functional collaboration between the IoT startup and Ameren’s customer experience team to survey their existing customer base and characterize the marketplace. The goal of the survey was to find target audiences to whom the WIFIPLUG could be marketed, and even generate some directional feedback on what some of the marketing messaging should be.

However, it wasn’t until the final stages of designing the survey that the startup received their new prototype for the U.S. market. Unlike their U.K. plug, which was white, the first render of the US prototype was a sleek black design.

Initially, Leon Doyle, CEO of WIFIPLUG, was pleased with the black prototype, as it seemed like a suitably futuristic iteration of the product with which to break into the U.S. market. But some unexpected feedback gave the startup CEO pause. Checking in with Dolly, he asked if it would be possible to add a last minute question about color preferences to the consumer survey. Luckily, the Ameren Customer Experience team was able to add it at the eleventh hour.

A Stitch in Time Saves Nine

Concerns that some late additions to the survey could tie up significant time and resources were solved instantly by UMSL Accelerate’s team of interns, who stepped up to analyze the data. After receiving some brief instructions regarding how to set up the survey, the interns were able to quickly send it out and gather responses.

That feedback could well have been the stitchin-time-that-saves-nine for WIFIPLUG, which retooled the design back to white at an early stage in development. One has to wonder what could have happened if this question had never been asked: learning this late in the development cycle may have resulted in poor product acceptance and poor sales.

“I see this as what we are about,” said Dolly, reflecting on her experience in the Ameren Accelerator. “We were able to make the difference and ultimately help them achieve great success.”

Dolly likens Ameren’s close work with startups to an extremely collaborative supplier relationship — one that is marked by a strong sense of shared purpose. Some of the other benefits of the program have been the acceleration of initiatives that Ameren has long wanted to pursue, but not necessarily has had the bandwidth or resources to see through.

One such initiative is RebateBus. Dolly’s team already had begun work with an external supplier on building a billing and rebate system, but the team hit some challenges in collectively defining a solution that would work. Their current supplier was great at integrating with Ameren, but struggled with the challenge of designing a customer-facing solution.

In discussions with other Ameren team liaisons, she learned about another startup in the cohort called RebateBus. Hailing from Wisconsin, the RebateBus team had built a simple e-commerce solution to instantly calculate and deliver rebates to customers. Their system is designed to help utility companies differentiate their buyer incentives — the team had even built a partner program specifically for utility teams. The functionality solves for particular needs such as two-factor authentication and narrowing the solution to specific zip codes.

Seeing the platform was believing, so rather than try to develop a custom solution in-house, Dolly referred RebateBus to the original suppliers with which she had started the project. Her hope was to open their rolodex of high-performing utility engineering teams in a simple act of share-and-share-alike, so all three companies can deliver a high-impact customer experience around claiming energy usage rebates.

“In my role, I often bring in outside suppliers for product or service demonstrations, and I review proposals when considering new opportunities for our energy efficiency programs,” said Dolly. “But participating in the accelerator, I feel I am actively helping the startups create the right solution to meet the needs of the Ameren customers I am serving every day. I get to share my knowledge of how to add customer value and improve the customer experience. Facilitating their effort is rewarding, as is seeing the engagement with our Ameren customers.”