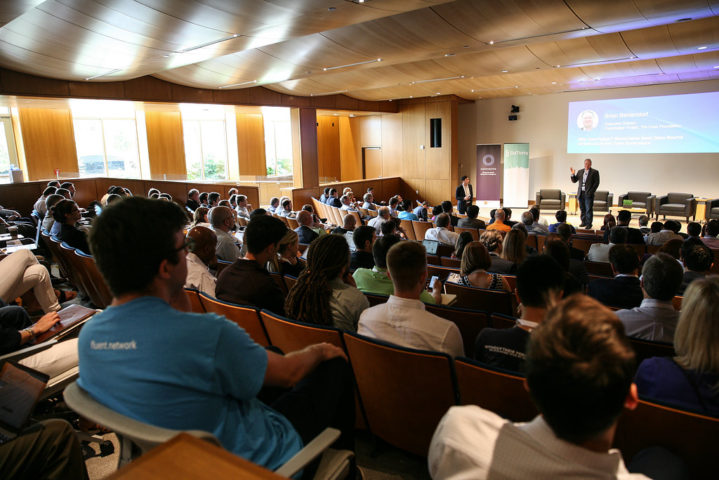 SixThirty and BTC Media will co-host the 2nd annual Distributed: Trade conference at Washington University in St. Louis on Monday, July 24. An intersection of finance and trade, Distributed: Trade is building on its conversation from last year about optimizing blockchain technology across entire industries. They are expecting over 50 speakers from around the world with a large number of local St. Louis experts in the mix.

An intersection of finance and trade, Distributed: Trade is building on its conversation from last year about optimizing blockchain technology across entire industries. They are expecting over 50 speakers from around the world with a large number of local St. Louis experts in the mix.

A key player in bringing the conference to St. Louis is SixThirty, a St. Louis-based financial technology (“FinTech”) venture capital fund that provides capital, connections, and coaching to early-stage FinTech companies from across the globe. Working alongside SixThirty to mentor and grow the selected early-stage FinTech companies are like-minded corporate partners including Edward Jones, State Farm, RGA, and UMB.

“We got to know him and the SixThirty team when they made some industry-leading investments in blockchain startups in 2015, when not many people were focused on this space. When we launched industry-specific events around the country last year, Atul and SixThirty had already shown us first-hand how St. Louis has embraced innovation in both the supply chain and financial services sectors, and we wanted to bring this conference to a city that has that kind of vision.”

Atul Kamra elaborates, “The bi-state St. Louis region is a massive financial services hub, home to a wide range of wealth managers, banks, payments, insurance, and other institutions [the biggest center of financial services outside Manhattan, according to a recent article in The Economist], all of which present strong business opportunities for the startups selected to participate in the SixThirty program.”

“Firms including Stifel Financial, Reinsurance Group of America (RGA), Wells Fargo, and Edward Jones are headquartered here or have a significant presence. It is a natural place to convene the best thinking on a promising technology that is emerging as a smarter, more secure and open way to verify and record value, assets, money and goods.”

This year’s event will take a deeper look into how the exciting new developments of blockchain technology will shape the future of financial services and trading.

Blockchain technology at its very basic is, as Kamra explains, “a book-keeping method. It publicly and chronologically records, or “chains” entries across a distributed network of computers so that the record is very difficult to modify later.”

“The ledger can only be changed when there is consensus among the network. It allows unrelated parties to jointly keep a secure and reliable record of their transactions and eliminates the need for a central authority to validate them. It is the underlying technology for cryptocurrencies such as bitcoin.”

The Distributed: Trade conference is more than just a gathering of blockchain experts, however. Kamra suggests the conference should be thought of as “the place where the blockchain evangelist meets the practitioner.

“After all,” he adds, “we are in the ‘Show-Me’ state. The success and traction of a distributed technology depends on the network participants: leaders at the forefront of a) financial services and manufacturing, and of b) logistics for money and goods. Also, regulators and lawyers, technology providers and the startup companies that are bringing forth the ideas and the path to realizing block chain’s potential. Let imagination meet action.”

Focusing on blockchain education and awareness, the conference will meet companies all along the spectrum of need and interest. From those wondering if they should be considering blockchain to those determining how to implement it, the seminars will address its diverse applications across various industries.

Keynote speaker Brian Behlendorf, Executive Director of Hyperledger, will kick off the conference, leading the way for sessions focusing on both financial and supply chain streams.

Attendees will gain insight into the financial applications for blockchain, focusing on issues like insurance and risk mitigation and how blockchain will underpin the future of global trade finance. On the supply chain side, attendees will hear discussions on topics like manufacturing and fraud detection and blockchain’s impact on global trade, as well as how blockchain addresses the unique challenges in the pharmaceutical and food supply chains.

Kamra hopes that people will take away a few things from the conference: “Confidence, ideas and relationships to advance blockchain adoption as well as awareness and actions to overcome barriers. The potential for blockchain technology has been hailed by the industry over the past few years and is now moving into the mainstream.”

“At a time when governments and companies– large and small–face challenges in data management, costs and security, blockchain technology is emerging as a way forward.”