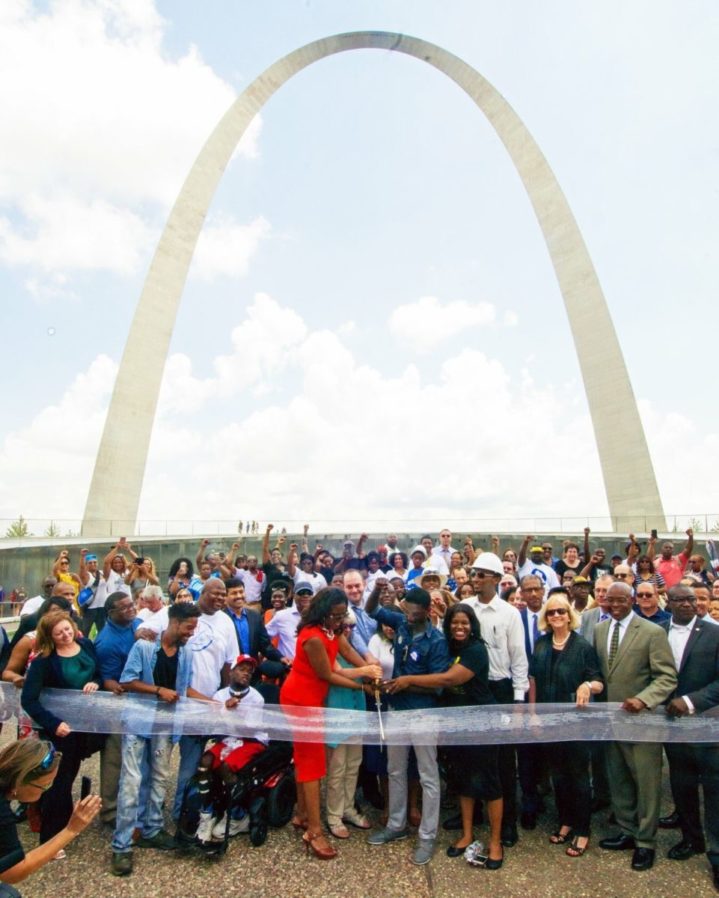 How St. Louis Activism Made Lemonade in 2018

We're almost a month into 2019 already, but with New Year's day falling on a Wednesday, this year got more of a gentle start than most. So, EQ's 'Member Berries' series that recaps all of the cool stuff that happened in 2018 is definitely a little late but we've got plenty of reasons to be cheerful.

It would be plain irresponsible to celebrate progress made last year without also recognizing that the city hit a major speed bump over the unveiling of the newly refurbished St. Louis Gateway Arch and grounds, which was recognized as a National Monument in 2018. What should have been an easy PR win became a PR crisis, as entire communities were not represented in the opening ribbon cutting ceremony.

While that moment itself was incredible — in the sense of disbelief — what was even more incredible was how those who were overlooked, dealt with it, rallied together, and countered with their own online PR strategy to make sure such an oversight would not happen again.

The Shadow Of Institutional Bias

Amidst all the pomp and ceremony that one would expect planned for such a “monumental” event, it seems that the organizers failed to recognize the important role of representation in the roll out of the national symbol of the city. In a spectacular own goal for the global brand of ‘St Louis,’ the social media rights to the photo-op around the ribbon cutting were apparently reserved for only the malest and palest amongst us.

I don’t know whether the photo was just a silly PR mistake. Even giving the benefit of the doubt, it was an all too typical mistake that revealed the systemic and institutional bias that many people of color face. In this moment of rubber-stamping the nation’s tallest monument, the shadow of hegemony was blatantly apparent.

You don’t even have to be especially tuned in to equity issues to recognize that the photo op of the first ribbon cutting symbolized the very definition of being left out. Quite literally, directly relevant communities didn’t get the memo; that esteemed invite to the table.

Against a tide of ongoing equity and inclusion efforts that have become of paramount importance in this city, life seemed to throw in a proverbial lemon.

When Life Gives You Lemons…

Thankfully, locals were as loud in their objections as the ribbon cutting planning committee were tone deaf. Concerned citizens raised their voices all over social media in response to the original ribbon cutting photo, decrying it as #ArchSoWhite.

De Nichols’ blog post on Medium, What A Photo Can Reveal about a City, is thorough explanation as to the dimensions of the error, but her thoughtful response also set the tone for conscientiously objecting.

Speakers from the Mosaic Project, and both the Asian and Hispanic chambers of commerce were also invited to speak. As Franks told the Post Dispatch, “This is not a do-over, this is the first inclusive.”

#ArchSoWhite “This is not a do-over, this is the first inclusive.” The point being made and emphasized at this second ribbon cutting is that the city represents a diversity of communities – not just one or two. @TheCoordinated from @STLMosaic reiterates that point. pic.twitter.com/rTgnwtdImL

This second ribbon cutting was nothing short of a tremendous victory for advocacy, activism and advancing recognition of why the discussion of equity in St Louis is so important. Rather than living with a bad memory, that second photo (below) created one of the greatest moments of re-branding a city in living memory.

“The People’s Ribbon Cutting,” was a truly innovative response, that took everything 2018 taught us about online protest and paired it with one of the founding advantages of social media over traditional media. Namely, that good news travels faster on social networks.

All the organizers, and everyone who attended or spoke up on blogs and social media, should be proud of what they pulled together then because an important balancing chord was struck.

Even those of us quietly dismayed, that the initial miscalculation should have ever happened in the first place, could reflect on the second photo and conclude that a certain grace befell the region that day.

For curious transplants like myself, still making sense of local politics, that moment reminded me of why I came to St. Louis in the first place. Here, everyone’s doing what they can to make a difference.