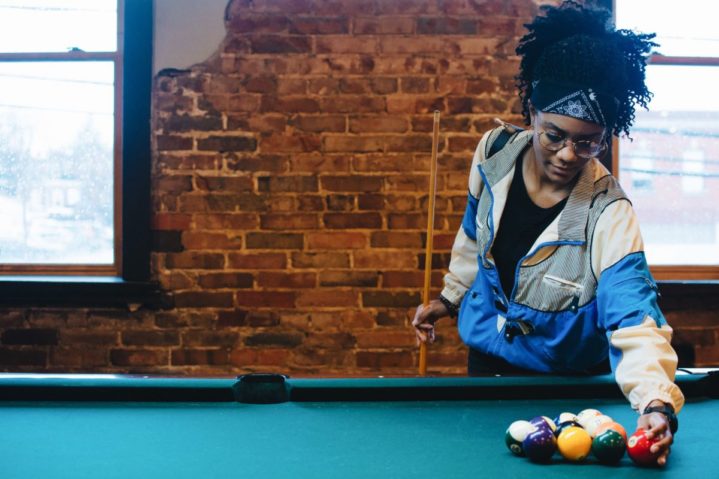 Underground culture plays an important role in shaping a community, and one Florissant native is working to reshape how others view Saint Louis. More importantly, she wants to change how the city views itself.

By day, Cami Thomas works as a marketing professional, but “by night and weekend and early morning,” she runs For The Culture TV (FTCTV).

FTCTV is her own multimedia blog that showcases the multifaceted world of underground artists, both sharing their work and individual stories for a wider audience.

The name comes from the popular phrase from “Black Twitter,” a cultural identity on the Twitter social network focused on issues of interest to the black community, particularly in the United States. Thomas and a few collaborators playfully used the “do it for the culture” maxim phrase frequently while working on previous projects.

“It means exactly what it says; it is content created by and representative of culture on the ground level,” said Thomas. According to the site, “FTCTV is your tour guide into the world of underground culture and all of the beauty and adversity that comes with it.”

Whether it’s about new fashion trends, emerging art movements, or breaking news in real time, FTCTV aims to share the world with the world through a “global community of storytellers and change makers”.

Among the original content on the site, the most prominent is the documentary series Smoke City. Each episode introduces viewers to a different neighborhood in the Saint Louis metropolitan area through meeting someone who lives there. Her fascination with both storytelling and dispelling her own hidden bias lead her to create this series as a way to open up the dialogue necessary to changing the community narrative in Saint Louis.

Thomas views bias as a part of the human condition, but says that when we are content and complacent in regards to our individual biases, trouble is sure to follow. Though Saint Louisans may occupy the same spaces for work and play, their home communities tend to be more insular than most of us would like to admit.

Thomas calls this the “home bubble” mentality. Despite copious amounts of data and statistics that will ultimately help us fix the issues in the Saint Louis community, “we aren’t on the same page when it comes to things that matter,” she says, “we first need to introduce ourselves to each other.”

Meet The Residents Of Smoke City

The first season introduces viewers to residents of Walnut Park, Ballwin, Florissant, South City, and Ferguson. She plans to cover every individual neighborhood in the area, and hopes to expand to include new residents to capture their perspectives on their adoptive homes.

The city of Saint Louis is one of Thomas’s biggest inspirations, so when it comes to sharing stories, she was excited to start at home. When asked about how her business makes an impact on her community, Thomas emphatically stated that it is the core of everything she does, as it should for all businesses. “Social impact is not a buzzword. It should be the root of what you do. I cannot imagine working in a community and not caring about that community and the lives of the people around me.”

She is inspired by the ways the emerging tech sector and creative worlds in Saint Louis are actively working together to support creativity all across the region. But attributes this new found energy to to the youthful spirit alive in this old city.

“‘The creative adult is just the child that survived,’ and Saint Louis is young enough, born anew, so we still have that child-like freedom in what we can try. We’re not bound by expectations, so we can let our ideas fly and get creative. It’s fertile ground…so we can try anything and push limits.”

Thomas has a calm nature about her, her effervescent energy and passion for life is clearly evident. She spoke emphatically about the importance of knowing her own power and helping cultivate empowerment in others.

“Ultimately, entrepreneurship for me is being allowed the freedom to execute without channels. The only guardrails are the ones you place yourself…, so every day I wake up and do what I feel like doing.”

With a counselor as a mother and a coach as a father, she says she was lucky to grow up in an environment where she was encouraged to try anything and everything from a young age.

“[My parents] created a sense of balance and instilled a high level of emotional intelligence in me, and I try to share that mentality with others through my work. Growing up, I knew that it was ok to second guess yourself or step away from a situation to take care of your emotions, but I also knew that I had to get up and try again.”

The digital storytelling strategy underpinning Smoke City is a concept of windows and mirrors – allowing people to see into a life that may be very different from their own, while also letting them see how similar their lives can be despite those differences.

Naturally, exploring topics and narratives that can potentially strike a nerve comes with its own challenges. Although she is not trying to sell a product, she does meet quite a bit of resistance and many cold shoulders along the way. Thomas has learned a hard lesson about sharing stories with a mission: not everyone is open to listening or caring about what you share.

“At the end of the day,” she says while shrugging her shoulders, “you can’t make people be open.” Nonetheless, there are far more people who want to be involved than those who take issue and her work has attracted throngs of collaborators.

While she tends to engage more with her collaborators than her detractors, she constantly revisits her process to see what she produces can be packaged differently to be more enticing to less interested parties, a skill acquired from her experience in marketing.

Thomas finds that while most people genuinely want to be a part of the change, many aren’t sure how to enter the conversation, leading to frustration and stagnation. For those people, she believes the best way to start is simple: just listen.

Approaching a conversation as a listener, first and foremost, is key She encourages others to hold back the instinct to make an initial contribution on first meeting, saying, “be more open-minded and have a self-starting attitude to do research beyond the conversation.”

She says that there will always be something that another person can share that is new information to the listener. Recognizing that we don’t know everything and not getting defensive about it can help us become better collaborators.

Overall, Thomas says it is most important to, “be an ally; there is a difference between walking beside someone and taking the [microphone] from them.”

As for the future of FTCTV, her goal is to tell and uplift the stories of people who aren’t normally heard, and encourages others to share their experiences through the world before the mainstream media has a chance to get their hands on it.

Thomas aims to expand the site to feature more submitted content than her own. “Right now, most of the content is stuff that I post, but moving forward, I want to scale back and see more shared content on the site. I shouldn’t be the one to tell other people’s stories.”

“FTCTV started here and will always have Saint Louis at the root, but it’s not bound to [the city] by any means. Saint Louis has always had a global impact; our music, our style, our slang, the way we protest- all of that had a global impact. This city can and will change the world, and God willing, FTCTV will play a part in bringing those stories to light.”

Before then, you can catch Cami Thomas speaking at the Midwest Digital Marketing Conference on the topic of Digital Storytelling: How Brands Can Better Understand Their Consumer Through Underground Blogs.

Ellie Scott
Ellie Scott is passionately curious about the things that connect humans to one another. Originally from Shreveport, Louisiana, Ellie moved to St Louis in 2015. She holds a M.A. in Public History from Arizona State University and is a contributing writer to EQ.