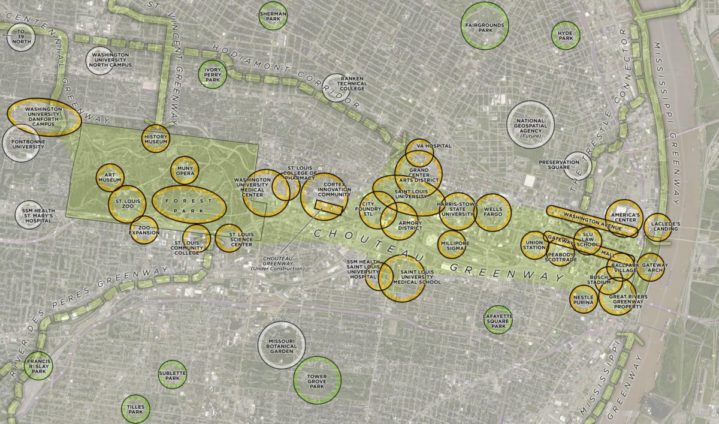 The Chouteau Greenway Design Competition partners and jury have selected the team led by Stoss Landscape Urbanism to refine their conceptual plans for a new greenway to connect Forest Park and the Gateway Arch.

The Results of a Seven Month Competition Are In

Four teams were chosen in January to compete and were given 90 days to develop conceptual plans for the Chouteau Greenway. Teams submitted their plans in early April for public feedback and presented their ideas to the jury and community last week.

“The teams’ responses to the design and community goals indicate their understanding of the complexity and transformative nature of the project to St. Louis,” said Don Stastny, Competition Manager. “Their receptivity to the community concerns and interests was apparent and will be important in the next steps of design refinement.”

And the Winner is… 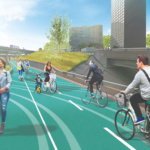 In the deliberations that followed, the Stoss Team was unanimously chosen as the team to participate in the next stage of the competition. The jury provided comments about each team, suggestions for refinement of the chosen team’s concept and overall recommendations; the full jury report is available online.

“The team has gusto – not just talent, but also passion for the project,” said the jury. “Their successful response to the goals is due to their strong team, clear framework, and flexibility to work with the project partners, the community and also institutions. The outcomes in their presentation are not solutions but provide a starting point for dialog and design.” 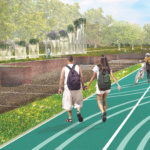 Through a series of workshops, the Stoss team will review the community input gathered thus far and work with project partners to further refine their conceptual plans. This phase is expected to take several months and will provide the opportunity to develop specific greenway corridors, connections, and concepts. Once the overall plan is in place, projects will undergo further community engagement, feasibility and alignment studies, design work and engineering before beginning construction.

“Thank you to the partners, stakeholders and community members for bringing fresh ideas and momentum to this project,” said Susan Trautman, Chief Executive Officer of Great Rivers Greenway. “The work to hone the concept and design a framework for equitable implementation is just beginning; we cannot wait to work with the Stoss team and our region to create a dynamic, world-class greenway that can transform our city and create common ground. This effort is another great example of how both the public and private sectors can work together to enhance the quality of life for all St. Louisans.”

A Co-Ordinated Effort Over the Next 10 Years 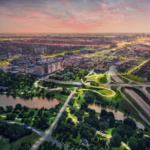 Great Rivers Greenway is joined by ten partners in a public-private partnership to lead the transformation of the city of St. Louis through an international design competition for a greenway that connects Washington University and Forest Park through the city to downtown and the Gateway Arch and the river. The greenway will feature an east-west corridor with connections north and south to knit together the city’s vibrant neighborhoods, parks, business and cultural districts, employment centers, transit and dozens of cultural and educational institutions.

“I expect that over the next decade, we will see substantial private investment in and along the Chouteau Greenway,” said project partner Steve Smith of the Lawrence Group, which is building the City Foundry STL project. “It is already happening. Several of our early national tenant commitments specifically wanted to locate along the greenway. Both the process and the finished product create opportunities for jobs and economic vitality.”