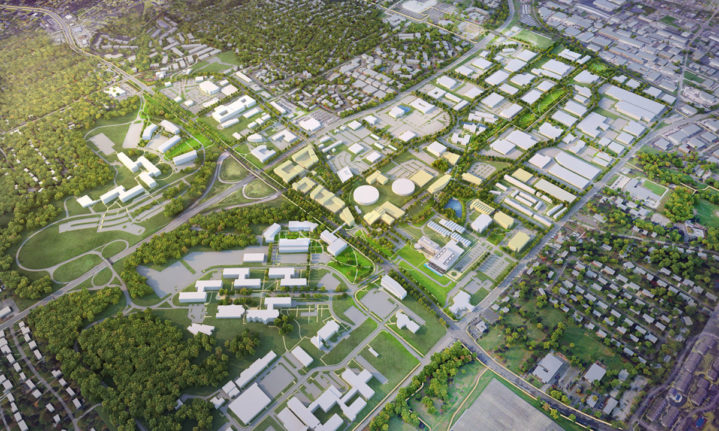 Innovation and the Socio-Economic Benefits of a Connected Green City

According to a wealth of studies, the benefits of green spaces to Cities and their residents abound. Green spaces increase economic development and property values, increase the overall health of residents, and are attractive to both businesses and employees. Recent studies have indicated that greenways make us happier as well.

Dennis Lower, President of the Cortex Innovation Center, thinks greenways are just a part of the new operational requirements for cities competing for millennials and talent and a strong overall quality of life. When talking about the Chouteau Greenway he said, “The greenway will not only help attract a vibrant workforce, it will also create a new recreational space that will improve livability in the heart of St. Louis.”

“The River Ring,” she has said before about the planned 600 miles of greenway that will encircle the region, “will make St. Louis a destination city.”

Building a Millennial City that attracts businesses and talent

Even with the public sales tax money earmarked for GRG, it took additional federal funding and private investment from the Cortex community to make the Chouteau Greenway project a reality. The greenway will eventually connect Washington University and Forest Park through Cortex to the Downtown riverfront and is just one network of trails out of a master network planned by Great Rivers Greenway.

A similar confluence of public-private development and opportunity is driving construction on the Centennial Greenway. This planned greenway will connect the City’s central corridor with 39 North, the AgTech focused development district made up of the Danforth Plant Science Center, the Bio Research & Development Growth (BRDG) Park, and the Helix Center Biotech Incubator located in St. Louis County off Olive near the Monsanto/Bayer campus.

Emma Klues, Director of Communication for GRG, points out that back in 2014, when the German seed company KWS SAAT AG were in talks to put their American headquarters at 39 North, they stressed that greenways were high on the list of amenities their employees cared about.

This prompted a phone call from the principles at 39 North and County Executive Steve Stenger to GRG to prioritize the Centennial Greenway, which will stretch from Shaw Park to and along Olive Boulevard. KWS chose to locate in St. Louis and now employs 75 people.

“Our goal isn’t just to connect Forest Park to the Arch,” Trautman says, “but to create access to the communities north and south and create a place of diversity and unity and a place where people in St. Louis have common ground and access to our cultural institutions, to our medical centers, to our educational institutions and to the great parks and greenways that are in our region.”

GRG has pursued other projects based on a greenway’s capacity to have a positive socio-economic impact. Following the unrest in Ferguson a few years ago, GRG prioritized the Maline Greenway (which will ultimately connect from St. Vincent Greenway to the Mississippi Greenway) to coincide with the reconstruction efforts. GRG began construction on the first portion of the Maline Greenway in Bella Fontaine County Park in March of 2018.

Especially for near South County and the North Side, greenway construction is shaping the future plans of developers and community organizations alike. According to the Trust for Public Land, as new trails and parks come online, they add a 5 percent premium to the market value of neighboring properties.

These greenways are opportunities for GRG apply for federal transportation grants as well, since they often affect building up transportation capacity in these neighborhoods. Just like federal money financed some of the Chouteau Greenway and the MetroLink stop at Cortex, Great Rivers Greenway applied for a federal grant for the Maline Greenway project to bring additional dollars into communities in need of outside investment.

“While it was not chosen to advance for this round,” Klues says, “GRG will continue to seek other opportunities to bring that project to life.”

Greenways are often seen as a connecting piece between planned development and economic renewal — a way to beautify a neighborhood and provide additional value for commercial and business investment.

The St. Vincent Greenway that runs through the low-income neighborhoods in the city of Wellston runs parallel to the Lambert MetroLink track. It also connects to the newest site launch of STL VentureWorks, the small business incubator run by the St. Louis Economic Development Partnership. The greenway and the business center are part of a coordinated effort to redevelop the North side as part of a comprehensive plan.

GRG is exploring a way to link the Chouteau Greenway to the Northside NGA site as well. The vision is to create a bustling campus atmosphere in what is now considered a blighted neighborhood and build physical continuity from the innovation centers of downtown St. Louis and the central corridor to the future NGA West headquarters.

Greenways for health and prosperity

The goals of GRG aren’t limited to economic development nor building a “millennial” cityscape. The agency points to many studies that indicate greenways are major factors in maintaining and improving the physical health of those living near them.

A recent study from the “Journal of American Medicine Association” documented the mental health benefits of greenways on socio-economically marginalized neighborhoods as well.

The study of Philadelphia parks and neighborhoods examined 110 randomly sampled vacant lot clusters, in which some were developed and some left vacant. The study concluded that in the areas turned into green spaces, residents reported feeling less depressed by a significant degree.

Creating a public-private mission for greenways

To help facilitate this kind of effect on a community level, GRG launched the Great Rivers Greenway Foundation, a 501.3C that accepts private donations for development projects. It also allows for private corporations, individuals or neighborhood organizations to propose and fund pet projects to build up their favorite greenway.

According to Klues, “[the new model] allows us to think bigger and bolder about the typical trail project.”

The goals for the new foundation so far are to pursue smaller projects to implement amenities such as toilets or water stations at trailheads, or even just benches or shelters along the trail. Presumably, with a sizable donation, GRG foundation might apply naming rights to any development, allowing a legacy aspect to whatever is built.

Innovation centers have a natural inclination to connect to one another. The green corporate parks that honeycomb the Maryland Heights business district are home to data centers and some of St. Louis’ fastest-growing tech companies. According to the master plan, the Centennial greenway at 39 North in Creve Coeur will eventually connect to the Fee Fee trail and to Westport and the World Wide Technology headquarters.

If greenways can unite a city’s business community, can we use them to unite our future innovation centers as well, connecting our schools and libraries, our industry clusters and tech hubs?

“Yes,” says Emma Klues, when asked this question, “There are endless ways for greenways to enhance economic opportunity. As we create ways to interact with our region in a more leisurely and exploratory way, rather than driving to and from a single destination, businesses and innovation have more opportunities to thrive.”

That led EQ to ask another question: If innovation centers and other economic development can influence where greenways are being built currently, should we also look to greenways as predictors of future centers of innovation?

If that’s the case, we should be looking at Affton along the Gravois Greenway (Grants Trail) and along River Des Peres through Shrewsbury, Kirkwood and Webster Groves as future innovation zones.

Can we look farther west at the Missouri Greenway in Earth City to connect to Maryland Heights and Lambert Airport for an innovation center around shipping, warehousing and logistics?

As we connect our innovation centers with greenways, we can also revitalize marginalized neighborhoods of the City. Can these trails be planned through Pine Lawn, one of the poorest townships in Missouri, along Highway 70 through Jennings, Normandy, Kinloch and Ferguson?

Perhaps one day, while traversing the trails from Washington University, to the Downtown Metro Arch Park, along the river’s edge, to the North Side and then west again, the next generation of civic visionaries will see only promise and opportunity where once we saw a legacy of neglect. Perhaps that generation– healthier, happier, more diverse and more connected– will then start planning the region’s innovation centers of tomorrow.