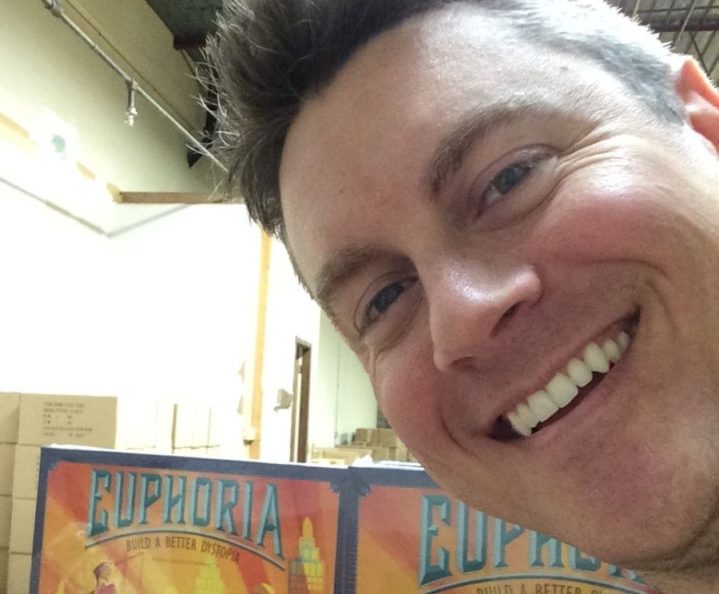 Stonemaier Games founder Jamey Stegmaier has raised more than $1.4 million from more than 19,000 backers in seven successful Kickstarter crowdfunding campaigns and now he also helps others succeed. His book, “A Crowdfunder’s Strategy Guide“, was released on September 14, and the crowdfunding campaign for Scythe, his next game, launches on October 13.

It’s the give and take, the engagement, people contributing in dollars and passion to create something that makes it special.

What attracts you to games?

I’m an introvert, so games provide a great construct for getting interaction with others.

What’s a favorite crowdfunding memory?
I talk about it in the book. The moment of reaching my first goal on my first campaign. Going from “will this exist?” to “it will exist, and I’m going to bring it to life,” with just a dollar, right before my eyes.

What makes a great game?

I consume a lot of material—blogs, podcasts, playing the games of others. Scythe is based on some art I found on Kotaku.com. For crowdfunding, I look for what clever things other creators do that work.

I’m mostly a realist. I acknowledge the glass is there and has some water in it. What I make of it is up to the choices I make.

Waiting tables taught me to see people as individuals and engage them that way. I studied international business and Japanese—I was fluent at one time—at Washington University.

Working as a project manager at a publishing company, I learned about keeping all the moving parts going. Blogging for nine years has helped me learn to engage in dialogue and conversation online.

Exactly what I’m doing right now. I really love it.

Maybe right a little more fiction writing. I wrote a novel once and although the same skill is part of a game’s backstory, I might write more short stories and novels.

Who’s a person in your past that helped you become who you are? What did they do? Do they know their influence on you?

My grandmother had a big impact on me. She passed away in January.

We have a big Catholic family; the effort she put into family reunions and community within family taught me much of what I know about building community and engaging everyone equally.

On Euphoria, my second game project, I had a few exclusives, such as only Kickstarter backers had the ability to modify the game.

People that later bought the game at retail were shut out, and it really hurt the larger community. I don’t do exclusives anymore because it’s not worth it.

Who are your favorite artists and authors?

Typhoon is a folk-rock band, heavy on the strings. Them and the Generationals.

What are you reading now?

I’m reading the Mistborn trilogy right now. Really good world-building and great characters. I wish my writing were this good.

Everything I do is about the customer/audience relationship. I wish every business had that kind of relationship with their customers.

I read before bed. It helps me shut my brain down.

The usual—Trello, Basecamp and GoogleDocs.

What’s your go-to tool for the tough stuff—the haters, the critics, those that don’t get what you’re doing and why?

The key is figuring out if someone is passionate and is just expressing it in different way. I either engage them in public or privately and really hear them out.

The trolls are different. On Boardgamegeek, I learned that I have to turn off some people in my feed if I know they’re just there to get under my skin. I have to put my energy into the people I can serve.

My blog, kickstarterlessons.com, is where I write about crowdfunding best practices and where I answer questions from other creators.