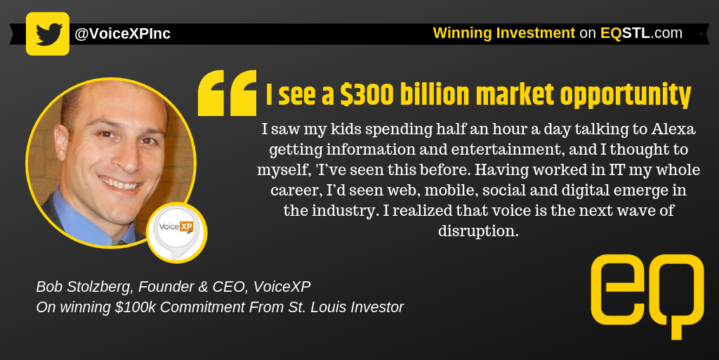 This week, on May 1st, a prominent South Korean investor based in St. Louis, signed a term sheet to commit to investing $100,000 in VoiceXP, a voice-app creation platform that helps businesses target audiences using smart speakers. The company is on a promising trajectory since winning a national Amazon Alexa Award competition in January.

Their customers are companies seeking to expand their business presence on these new type of devices. Current customers represent a broad range of industry verticals, including Hallmark, CenturyLink, Amazon, and Arizona State University.

Click the “Enable” button on the Skill in Amazon, and you can immediately talk to Alexa about Capital Innovators, and hear about the current accelerator participants, the program itself, the team, and a wide-variety of other information.

In early 2018, Arne Alsin, founder and Portfolio Manager of Worm Capital and contributing writer to Forbes, advised other investors to pay attention to voice technology.

“The next phase of computing is a complete paradigm shift in how humans interact with technology: It’s dropping the screen and integrating AI-driven voice technology. If you’re an investor, this is an incredibly exciting moment—these opportunities do not happen often, and the market has yet to grasp this disruption’s consequences.”

A little more than one year later, a leader in voice-based apps has yet to emerge. Bob Stolzberg, Founder and CEO of VoiceXP, a two-year-old St. Louis-based startup, plans to change that.

“I see a $300 billion market opportunity,” Stolzberg told EQ in a phone interview.

Stolzberg, a career IT professional, started VoiceXP in 2017 after watching his children become engrossed in the Alexa he’d gotten for Christmas 2016. It reminded him of when he was growing up and computers first became available to the masses.

“I saw my kids spending half an hour a day talking to Alexa getting information and entertainment, and I thought to myself ‘I’ve seen this before,'” Stolzberg said. “Having worked in IT my whole career, I’d seen web, mobile, social and digital emerge in the industry. I realized that voice is the next wave of disruption.”

VoiceXP jumped into Capital Innovators Spring 2018 accelerator with a strategic mindset. In addition to the $50,000 cash award and the coaching and mentorship that accompanies selection for the program, Stolzberg was keenly aware of the necessity for networking in the community.

“One thing I’ve learned is that you’ll never get there alone. St. Louis is a very small town and if you want to play, you have to know who the players are. Capital Innovators has always been one of the players that I have a lot of respect for,” Stolzberg said. “If you want to get access to capital in St. Louis, you have to know who those people are, pay your dues, and follow the process.”

In addition, Stolzberg has big goals. “I’m in this for the long haul. I want to own the market share of voice so I need all the help I can get from experienced people. These are some of the most experienced the St. Louis has to offer.”

As a former DJ and marketer of raves and music events, Stolzberg understands that music is the number one use case for voice technology.

“I thought, this is a better way to engage. You can just ask to play songs, and get information about the artist from how to book them to facts about them. Voice is just a new way to program and create experiences for fans that makes it highly engaging,” Stolzberg said.

Following that line of thinking, Stolzberg began trying to get a local musical artist to adopt the technology as a proof-of-concept. He looked for the biggest local name he could — and got the attention of multi-platinum rapper, Chingy.

“I explained to him that it would be like he was the first musician to have a website, but better because they can ask it to play the latest song, play the old songs, tell them the tour dates — it’s just super easy,” Stolzberg said.

The collaboration with Chingy resulted in the Alexa Award, where VoiceXP beat out major brands in the voice marketing category like Tide Stain Remover, Good Housekeeping, and Fitbit.

The award turned into more rewards for both parties. Chingy was sent to Amazon headquarters to do a concert as the debut for the Skill and VoiceXP built relationships with Hip Hop World Magazine. Also, the executive casting director of Shark Tank approached Stolzberg and invited him to apply to the show’s Season 11. Stay tuned!

“It is just so important,” Stolzberg said. “In the near future all artists will have their own voice experience because they can control the entire experience, and with add-ons like the Amazon Echo, you can also play video this way.”

“Chingy got a lot of attention because people listen to music, but we’ve cracked the code to help all businesses get value out of voice and I think that’s the bigger story for down the road.”

VoiceXP is growing and actively seeking VC funding currently. They recently hired a full-time marketing consultant to join their team of six. The company also plans to hire new members and build out a Customer Success team.

With the recently acquired $100,000 term sheet in hand and assistance from the local South Korean investor, Stolzberg intends to expand VoiceXP’s SaaS platform into the asia-pacific market.

“The opportunity in Asia is just as big as it is here, in North America. Globally, I see a $300 billion market opportunity and plan to get in to Asia just as early as I have established a base here.”