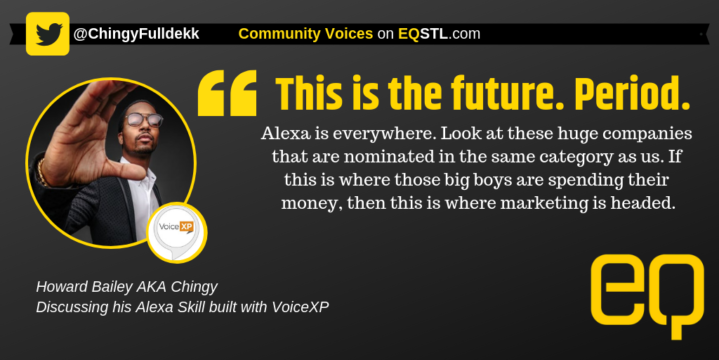 The seemingly unusual pairing of a voice technology company and a multi-platinum selling rapper have landed a winner in the national Alexa Awards competition.

St. Louis native Chingy took the innovative step of moving the marketing efforts for his work to the Alexa platform through St. Louis’ VoiceXP, and it’s been noticed nationally. Other finalists in the Alexa marketing category are Tide Stain Remover, Good Housekeeping, and Fitbit. But when the winners were announced, Chingy and VoiceXP came out on top.

“This is the future. Period,” Chingy said. “Alexa is everywhere. Look at these huge companies that are nominated in the same category as us. If this is where those big boys are spending their money, then this is where marketing is headed.”

VoiceXP founder and CEO Bob Stolzberg says the trick is broadening the use of voice technology. It’s already in more than 25% of American households according to estimates, and Amazon alone says it has sold over 100 million Alexa enabled devices.

“People are already using Alexa to play music, shop, and check the weather,” Stolzberg said. “So why not let them get more detail on their favorite musician? Get to know him better? Watch his videos? Get his tour dates? It’s all about using these devices to their full potential and tailoring them toward the wants of the individual user.”

Chingy was the first musician to jump on the Alexa platform this way, the award seems to show the move is paying off.

Chingy, born Howard Bailey, entered the voice technology space back in the Fall of 2017 when he teamed with VoiceXP to develop his “skill,” the name used in the voice world to describe what is essentially an app. On the skill he released his most recent EP, FYR, and also provided tour and biographical information for his fans. The single of the same name included Chingy interacting with Alexa throughout.

“I really wanted to explore how I could have better access to my fans through technology,” he told the Huffington Post at the time. “I want them to be able to connect to my music instantly and keep up with my everyday life, thoughts and projects. Now they can do that with Alexa and VoiceXP,”

VoiceXP continues to move the technology into businesses you might not expect, creating “skills’ or apps for companies like Hallmark, Mercy Health, and Clayco.

The Alexa awards were presented last month in Chattanooga, TN at the Alexa Conference presented by VoiceFirst.FM. Other winners include Bloomberg, Capital One, The Mayo Clinic, and Apple Music.

George Sells
George Sells is a St. Louis based journalist who, thorough his company George Sells Media, also does media relations and video production work. He’s also one of the most experienced 360 video producers in the Midwest.