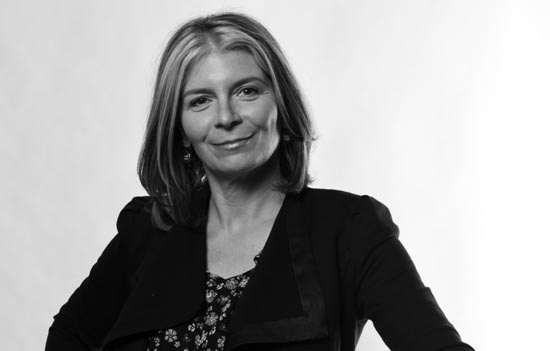 Leadership By Design: Maria Giudice of Autodesk Comes to SLAM To Talk Falling Into—and Out of—Entrepreneurship

On Jan. 19, Saint Louis Art Museum will partner with AIGA St. Louis to present Maria Giudice as its annual Ann W. Olin Lecturer. As Autodesk’s vice president of experience design and a successful entrepreneur in her own right, Giudice will focus her talk around the important role that the arts play in business and society.

After moving to California for her first job out of college at Richard Saul Wurman’s Access Press, Giudice fell in love with San Francisco, then at the dawn of the tech age. She wound up “accidentally moving there,” leading a team of 20 at 24 to redesign the Pacific Bell Yellow Pages. After a few years, she quit her job and joined a friend to travel through Asia, then came back and began freelancing. Her clients grew, she hired more people to help her and eventually, Hot Studio, an experience design firm, was born in 1997. Over the next 15 years, Hot Studio took on a roster of Fortune 500 clients and grew from a company of one to 100 before being acquired by Facebook in 2007.

In her recently published book, “Rise of the DEO: Leadership by Design,” Guidice explores how creativity and business acumen connect to produce multifaceted leaders able to to tackle complex issues in today’s business landscape. In anticipation of her lecture, we couldn’t pass up the opportunity to jump on the phone with Giudice to talk about the intersections of design and technology and why careers today are like trampolines.

Your entrepreneurial career trajectory has been kind of linear in a way, looking back on it.

It’s linear, but it’s really about—when our parents were growing up, you basically had to pick a major and get a job and stay in that job for the rest of your life. Today’s world is really about kind of finding your way through your career and paying attention to those pivot points that could put you in a completely different trajectory. The Facebook thing wasn’t planned; the Autodesk thing wasn’t planned. You get these opportunities, these moments where you decide whether you’re going to stay in the same situation or pivot and change. I feel fortunate to be in my 50s and have the ability to decide when it’s time to do something else.

I think sometimes people can’t grapple with leaving their “path.” There’s a notion of failure in leaving it. Do you think that’s changing?

You have to be sensitive to where are you in your career and be completely open to change. In the past, change was a bad thing and it was all about stability, reputation and working your way up the ladder in a company. There’s a certain sort of permission and freedom to your career. In the book we say [that] it’s more about your trampoline: You’re jumping from one job to another. There’s no longer a career—there are trampolines. It’s something to be aware of, and you don’t want to miss those magic moments.

How did you distinguish yourself from other creative studios out there?

It’s hard to do; it’s really hard to do. Ultimately, we were an interaction design company designing websites and apps—a lot of studios were doing the exact same thing. We weren’t competing for clients; we were competing for talent. You’re only as good as your worst employee, and a lot of talent would go from one agency to the other.

How do you differentiate in that kind of environment? We were really one of the first design studios to talk about our way of working, which was creation with our clients—our clients being part of our team. If some people don’t want to work that way, then they’re not the right people for us.

You built up Hot Studio for 15 years. When did you know that it was time to sell?

I was always very transparent with employees. I would always tell them, “I’m not going to be 80 years old and running this—I’m just not. So I’m giving you some warning now.” In my mind, really, I wanted to do something different when I turned 50.

I would also tell employees that there are two paths: Either I’m going to sell the company or I’m not. If we sell, it has to be the right person, the right time and the right reason. Hot Studio was constantly approached by other companies, but it was never the right people, or the right time—the stars didn’t align. Most acquisitions of design studios are acquisitions by bigger companies of smaller companies, essentially meaning it would be exactly the same thing with less money, less control and less fun. I didn’t want to go down that route. It didn’t seem like a good outcome.

When Facebook came and said, “We love your people; we need your people; we want you to be part of our team,” I got to say we’re going to stop Hot Studio; we’re going to freeze it in time, preserve it at its greatest point and go do something else. It was the right place, right time and for the right reasons, and it put me on the trajectory that I’m on today—so it was exactly the right move.

What advice would you give to entrepreneurs thinking of following a similar track?

The only thing I would like to remind people is that the average person works 90,000 hours in their lifetime. So make sure you’re using those hours wisely, because life is short. So work in a company that you love and that you believe in. And if you don’t love the company, and you don’t believe in its mission, then get out of there and do something else—and don’t be afraid to do something else.

Giudice will be speaking in SLAM’s Farrell Auditorium on Jan. 19 at 7pm. The lecture is free and open to the public, though ticket reservations are required. For more information about the lecture, visit slam.org. Copies of “The Rise of the DEO” will be available for purchase prior to the lecture; preview Chapter 1 online.