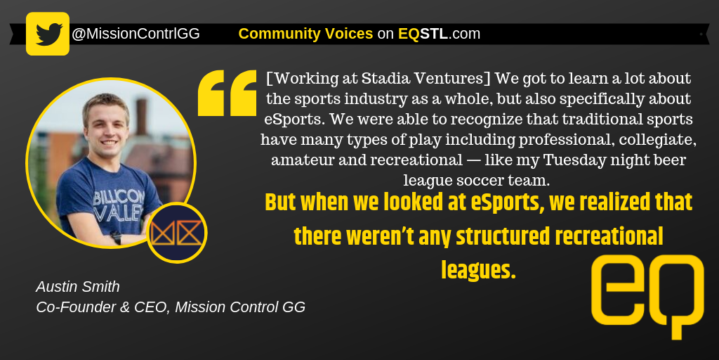 In her book Reality is Broken: Why Games Make us Better and How They Can Change the World, game designer and author Jane McGonigal writes, “A game is an opportunity to focus our energy, with relentless optimism, at something we’re good at (or getting better at) and enjoy. In other words, gameplay is the direct emotional opposite of depression.” McGonical is also an advocate for employing digital and mobile technology to practice collaboration that can then be applied in the real world.

What if there were a way to organize a specific group of people to play Madden, NHL, MLB, FIFA, or NBA online regularly together for several weeks? What if your work team or volunteer group could play in a Fortnite, Call of Duty, Super Smash Brothers, or Mario Kart video game league —how would that change how you work together? What if someone else did all the organizing, tracking, and reminding and even gave a prize at the end to the champion? 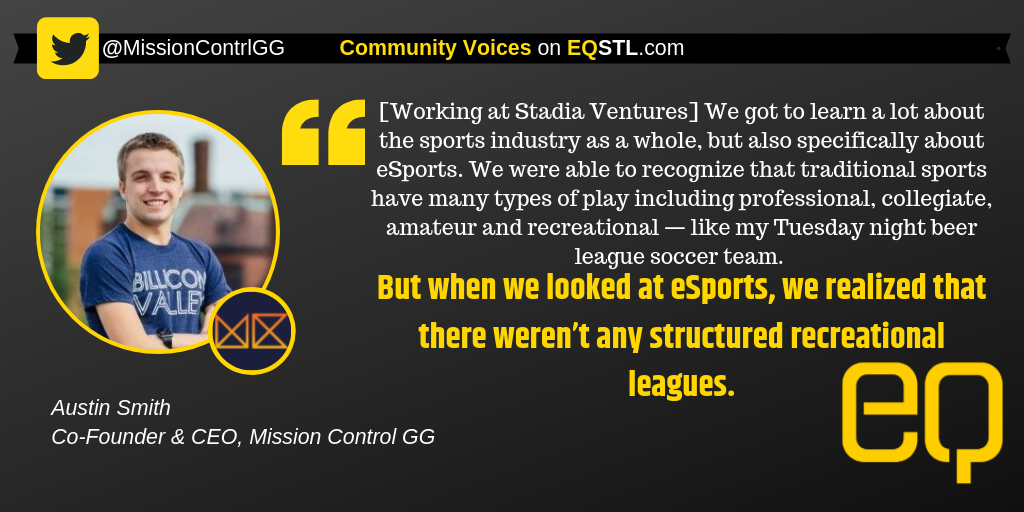 Mission Control is a digital platform where users create video game leagues that bring friends, students, co-workers, and community members together —virtually or in-person— on a regular basis, to play the group’s chosen game. Mission Control assists with scheduling, assembles brackets, sends reminders and follow-ups, and tracks scores leading to a champion for each customized league season. It is the eSports version of recreational league sports.

Mission Control closed its alpha testing phase this summer, in June, and is actively building out its full-featured application now; with plans to launch this fall.

Co-founders Austin Smith and Byron Abrigg developed the idea for Mission Control while working at the global sports innovation hub, Stadia Ventures as interns and post-grads from St. Louis University in 2017. Smith is a native St. Louisan, while Abrigg is originally from Youngstown, Ohio.

The name Mission Control, Smith said, “evokes the idea of a challenge and teamwork to solve that challenge. For us, it means working together to solve the challenge a game presents, so a collection of teamwork and games. Plus, it’s cool.”

Stadia Ventures, founded in 2015, brings entrepreneurs, industry leaders, and investors together from around the world to innovate around the business of sports. It was the ideal setting for Smith and Abrigg to learn about innovation in sports business.

“We got to learn a lot about the sports industry as a whole, but also specifically about eSports,” Smith explained to EQ. “We were able to recognize that traditional sports have many types of play including professional, collegiate, amateur and recreational —like my Tuesday night beer league soccer team. But when we looked at eSports, we realized that there weren’t any structured recreational leagues. So that was where it started.”

Smith and Abrigg first saw Mission Control’s potential in the context of their own social lives. “Since we had graduated, we didn’t have time to see our friends as organically as we did in college. Then, we could play intermural soccer, volleyball, or video games with our friends easily due to proximity. We wanted to bring that same social yet competitive feel to our post-college lives,” Abrigg said.

Where traditional sports intramurals after college might be logistically challenging since people have moved off campus and out of state, video gaming has the advantage of being virtual and therefore adaptable to diverse geographies.

For example, four friends that went to school together now live in four different states, have full-time jobs, and don’t make the time to talk regularly. They had become friends in college because they all played intramural soccer, and they all independently play FIFA online. 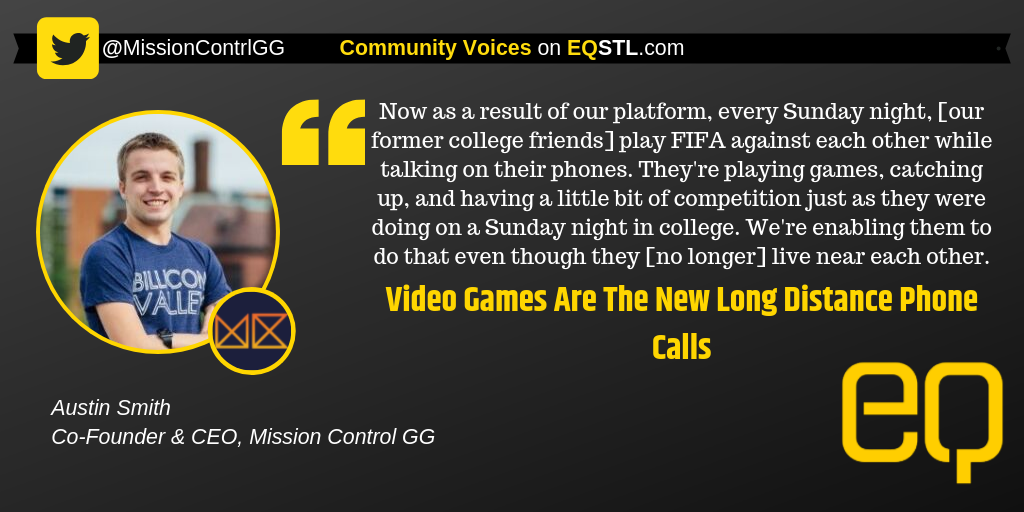 “Now as a result of our platform,” Smith said, “Every Sunday night, they play FIFA against each other while talking on their phones. They’re playing games, catching up, and having a little bit of competition just as they were doing on a Sunday night in college. We’re enabling them to do that even though they don’t live near each other and have a new lifestyle.”

Once they started working on Mission Control, however, Smith and Abrigg began seeing a larger opportunity. If Mission Control could keep college friends talking to each other after graduation, what else could it do?

As they worked on expanding their test user list for an alpha test, they mined their college connections, as well as those at other schools. As entrepreneurs in the St. Louis Startup ecosystem, they asked their fellow entrepreneurs at the many co-working spaces around town to help them test.

To create a video game league in Mission Control, an individual or organization administrator creates an account (if it’s their first league), logs in, and adds nine additional friends and/or co-workers to the league. By doing this, they become the League Commissioner.

Next, the League Commissioner selects the game, the platform (specific console or multiple), how the game will be scored, and how to determine the winner. Mission Control doesn’t provide the game — it’s a “bring your own tech” situation. Mission Control currently supports Madden, NHL, MLB, FIFA, or NBA, Fortnite, Call of Duty, Super Smash Brothers, Mario Kart and Rocket League.

“You go into our website and create your own league, just like you create a league for Fantasy Baseball. Except you get to be a player. From there, Mission Control sets the schedule, we organize your players to play head to head, we validate the scores, set up playoffs, and distribute the prizes,” Smith said.

Mission Control offers three types of leagues, with three different types of prizes. Free, which has the bragging rights prize for the champion, Pay to Play with cash prize, or Premium with prizes for all and a large prize plus cash for the winner. Scheduling options include one night a week, flexible within a week, or an open schedule.

Results for the entire league are posted on the Mission Control website, including brackets and how each individual is faring.

Mission Control is considering at least three revenue streams once they are live with their application: league fees, feature expansion, pay-to-play, as well as sponsorships and ads.

“Similar to fantasy sports leagues, if a Mission Control league charges its players money to play, we take a fee from that charge as well as from the prize money.” Smith said.

As they grow, Mission Control expects to be adding features that people will want to pay for. “It might include links to social media, content, training, or stats. We can develop specific features for our partners who are willing to pay for them,” Smith said.

In addition to hosting ads on their website, Mission Control plans to seek and work with partner organizations to promote Mission Control while promoting something important to the partner.

“Someone wanting to get in front of all of these St. Louis college students could make their product a desirable and fun prize for, say, eight different university leagues,” Smith said. Mission Control would be promoted along with the partner organization.

Once the app is ready this fall, Mission Control will launch a pilot in community organizations and universities in three cities—Boston, Dallas and St. Louis.

“The demographics of those cities combined with our connections there helped us make that decision. We will have 137 organizations with a goal of 48,000 users as a test to prepare for a national launch, “Smith said.

Longer-term, Mission Control has its eye on acquiring local and national partnerships. “Partnerships will allow us to scale on a couple of our channels—private, universities, and community centers. To get solid user growth,” Smith said.