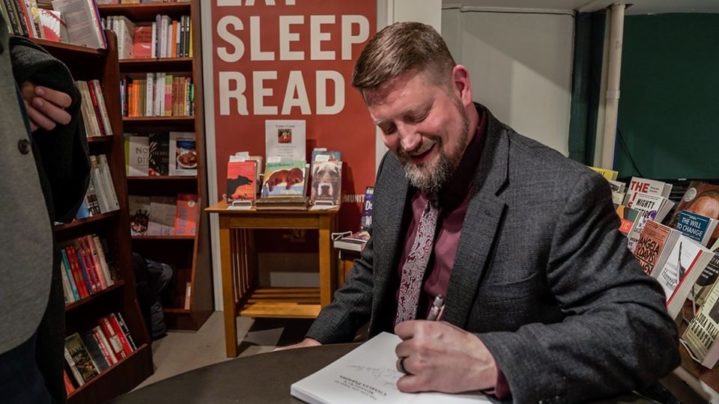 John Launius, President of Vidzu Media, and a frequent partner and emcee of EQ’s live-streaming-shows at events such as Startup Connection and MDMC, has a fascinating side hustle. He’s a designated “Show Me Missouri” Historical Speaker, where he represents the Missouri Humanities Council and the Missouri State Historical Society and lectures on nineteenth- and twentieth-century America.

This week, on March 4th (Wednesday) at 7 pm, you can find Launius at Left Bank Books signing copies of his new book on a lesser-known luminary of St. Louis, Charles Parsons. Launius tells the full story of Parsons’ life, from business failures in a riverside boomtown caused by the panic of 1857, and then his rise following to national renown.

I caught up with John Launius briefly over email to find out more about the character.

“Charles Parsons is one of St. Louis’s and the nation’s most influential yet little-known figures. If you’ve seen the mummies on display at the Saint Louis Art Museum, he purchased those while in Egypt in 1896 for study and exhibition in St. Louis,” Launius explained to EQ.

“His painting collection can be seen right now at the Mildred Lane Kemper Art Museum at Washington University in St. Louis. He lived an extraordinary life filled with contributions to St. Louis that he called supporting the ‘common good,’ still seen across our city today.”

During the Civil War, Parsons was instrumental to the Union cause as a quartermaster and advisor to generals, politicians and presidents alike. He was also best friends with General William T. Sherman when Sherman lived at 912 Garrison Avenue.

As a world-traveling art connoisseur, Charles Parsons helped found the first art museum west of the Mississippi, to which he donated his remarkable collection of American, European, and Asian art. To this day, his philanthropic work and dedication to education live on in some of the country’s grandest institutions, such as the St. Louis Art Museum, for whom Parsons purchased and preserved two Egyptian mummies that are now on permanent display.

Anyway, don’t let me tell you about Charles Parsons. I’m not qualified.

Let John Launius explain, as he did to KTVI FOX 2 anchor, John Pertzborn, on the 250th anniversary of the founding of St. Louis.