This month, the Commerce Department that the United States Census Bureau announced that it will print 2020 Census questionnaires without the citizenship question. 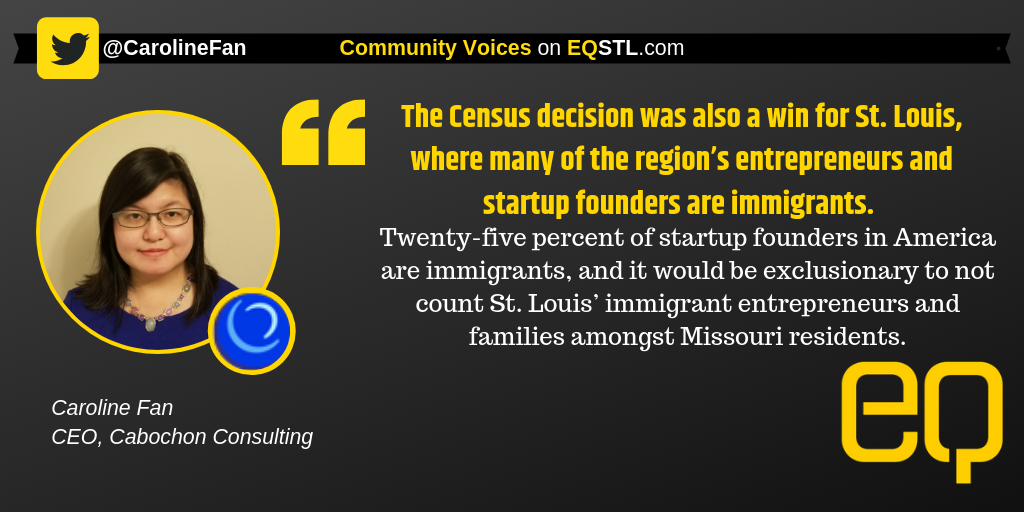 The announcement was a win for advocates and St. Louis companies and startups who rely on the Census for accurate demographic numbers. Despite the challenges posed by Census 2020, there are also a lot of opportunities for govtech and immigrant community outreach, as this will be the first Census to use the internet for questionnaire collection.

The citizenship question had provoked fear and confusion amongst immigrant communities, where many households have family members of varying immigration statuses. Because the Census complete count is vital to ensuring that the St. Louis region gets the resources it needs for our schools, hospitals, and roads, it is imperative that everyone who lives here is counted.

According to George Washington University professor Andrew Reamer, each person who is not counted costs a state over $19,000 on average. That’s money St. Louis could be using to educate our workforce, fund our hospitals, and pave the roads and bridges that we take to work and back.

The Missouri Foundation for Health, the convener of philanthropic efforts around Census 2020, stated, “While we understand there may still be hesitation about participating in the 2020 Census, choosing to abstain would be detrimental to our communities… the Foundation will continue to support a 2020 Census that counts every Missourian.”

Census consultant Terri Ann Lowenthal, who used to serve as staff director of the U.S. House of Representatives census oversight subcommittee, stated that the final outcome of the back-and-forth on the Census citizenship question is that, “the president finally dropped his insistence on adding an untested citizenship question to the 2020 Census at the 11th hour, after losing challenges to that proposal in four federal courts, including the Supreme Court.”

“Unfortunately, the administration’s prolonged crusade for the question created fear and confusion in immigrant communities about the true motives behind the effort. Census advocates and the Census Bureau still have a steep climb to reassure people that it is important and safe to participate in the census next year.”

The Census Bureau has estimated that for every percentage point of American households that doesn’t respond to the Census, it costs an additional $55 million to conduct door to door enumeration. Estimates around including the citizenship question predicted a 5 percentage point undercount of immigrant and refugee communities nationally, which would have cost over $250 million to address.
Census 2020 will use various methods to reduce costs for this Census – beyond capturing questionnaire data online.

First Census to Use the Internet for Questionnaire Collection

This is the first-ever decennial Census that will use the internet to collect questionnaire information – all previous Censuses have been paper-based. The change opens up a lot of opportunities for translation into thirteen languages (Arabic, French, Haitian Creole, Japanese, Polish, Portuguese, Tagalog, English, Chinese, Korean, Russian, Spanish, and Vietnamese) but also sets up barriers for communities that lack access to broadband.

Fortunately, households can also call in one of those thirteen languages over the phone. The paper Census will still be sent to all households, but will only be in Spanish and English.

Lowenthal, a “consultant on all things Census,” also stated, “The 2020 Census will rely on technology for the first time in a number of ways beyond the on-line response option. For example, census takers will use electronic devices (smartphones) to collect information during door-to-door follow-up visits. Automation generally will improve efficiency, by allowing the Census Bureau to process responses more quickly and avoid unnecessary visits to homes.”

Additionally, the Census Bureau will be tracking questionnaire completion in real time for hard to count areas using mapping software via the Response Outreach Area Mapper (ROAM). Another innovation for Census 2020 includes having enumerators go door to door with issued smartphones that allow them to capture respondent information immediately online. The smartphone solution will also provide a custom, optimized route for each enumerator based upon the time they have in their shift, and which households they have to cover.

This software has been available on political campaigns for some time, so it’s a welcome addition to see the Census Bureau adopt this technology. Although there are challenges and misconceptions ahead, it is vital that St. Louis works together as a region to have a complete count and address questions and misconceptions around Census 2020.

Caroline Fan
Caroline Fan is a writer and startup maven who enjoys experiential learning and participating in hackathons. She runs Cabochon Consulting and helps startups, nonprofits, and political campaigns tell their stories.