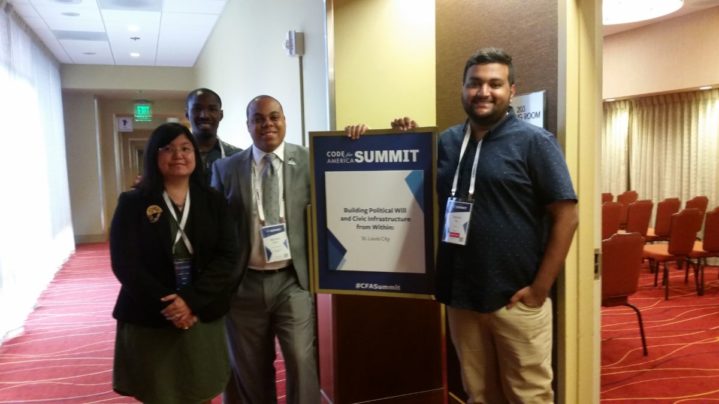 Last week, the St. Louis Recorder of Deeds Michael Butler, his staff, and Open STL, the main civic tech volunteer organization, were invited to present on their joint efforts to modernize government at the national conference of Code for America, which had 1300 attendees. Code for America is the main organization pushing for modernization, accessibility, and open source technology within local, state, and federal government.

Recorder Butler took office at the beginning of January 2019, and has been on a fast pace to make his office more efficient and customer friendly, beginning with redoing the website. A packed room of government employees and technologists were there to hear from Recorder Butler on how to build political will for Civic Tech within city government. The Recorder’s office and OpenSTL spoke about how they were working on changing employee culture, revising forms to make them clear, legible, and easily understandable, debuting a new modern website, and on future changes to the office. Butler, who is the first millennial elected citywide and the first African American to hold the position, was one of a handful of elected officials from the US and internationally who spoke.

Recorder Butler stated, “In 2019, you should not have to come to City Hall to access your personal records.” His campaign was built on a platform of making government more accessible, and now the office is implementing the changes, with the help of Nehemiah Dacres and Mohith Rao from Open STL, the St. Louis chapter of Code For America, a group of volunteer coders and designers making government work for the people, by the people, in the digital age. The partnership with Open STL is one of many public-private partnerships that the St. Louis City Recorder is building.

Questions from the audience ranged from: “How do we get elected officials to buy into and pay for website and infrastructure upgrades?” to “How do you maintain the technology that you buy?” Caroline Fan from the Recorder’s office said that the office has been scrappy and that they “don’t have a U/X guy but that there is someone with 10 years of sign-making experience redoing the forms to make them easier to use.”

The St. Louis City Recorder and Open STL look forward to bringing back the many best practices and lessons learned to make St. Louis city a more modern, thriving city that champions Civic Tech and GovTech.

Related Reading: What’s the Difference Between “Civic Tech” and “GovTech”?