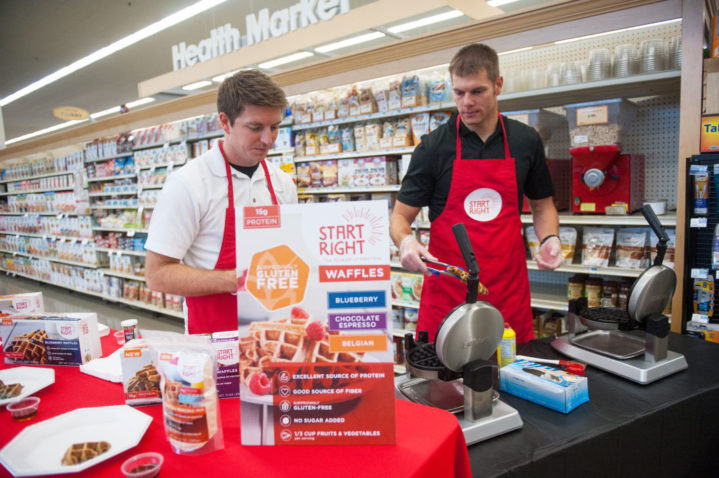 Breakfast, for most of us, is normally a bit of a scramble—if we get to it at all: a bowl of our kid's cereal, reheated leftovers, a scrambled egg or two if you have a precious five extra minutes. But Start Right's founders want to change that. Here's how.

Breakfast, for most of us, is normally a bit of a scramble—if we get to it at all: a bowl of our kid’s cereal, reheated leftovers, a scrambled egg or two if you have a precious five extra minutes. “Unfortunately, the lack of convenient, high-protein options combined with the ever-shrinking window of time we have each morning results in an overwhelmingly high rate of bad breakfast decisions,” says Start Right Foods co-founder Kyle Rood.

But Start Right’s founders want to change that: They want to “make it easy for everyone to fuel their morning with the power of protein,” says Rood. “We create convenient, high-protein breakfasts that are delicious as they are nutritious, so no longer does one have an excuse to skip their morning meal.”

The startup’s story isn’t exactly typical, says Rood: “We don’t have a great-grandmother with an amazing recipe, and we didn’t stumble upon this waffle out of experimentation.” Instead, they stumbled upon the recipe’s creators—a team of nutritional physiologists at the University of Missouri who developed the waffle to use in a study about high-protein breakfasts—while they were running their first startup together. “The waffles were not only convenient and delicious; they were a sweet alternative to the standard protein sources, sausage, bacon and eggs,” says Rood.

The secret to the waffle’s high protein isn’t just dumping protein powder into the batter. Instead, the waffles use all gluten-free flours and get most of the protein content from eggs. They also blend in a large portion of fruits and vegetables and contain no added sugar. “Rather than just a ‘syrup carrier,’ these waffles are more like protein cakes, hearty and filling, and are delicious without needing syrup,” says Rood.

Both Rood and Matthews were athletes at the University of Missouri, which taught them “teamwork, coachability, and above all, delayed gratification. In both our sports, a dedicated commitment to a long-term goal was crucial to success,” says Rood.

They began Start Right alongside industry consultant Gene Gerke. While the co-founders manage the day-to-day of the company from the 1,500-square-foot kitchen they work out of in St. Louis, Gerke provides contacts, investment leads and guidance.

“While Clint is a big-picture guy, I’m your typical, detail-oriented, data-driven engineer,” says Rood. “I consistently supply a heavy dose of pessimism to balance out his enthusiasm. I like to say I’m the lead weight to his balloon, which keeps us floating nicely just above the ground.”

The rest of the team includes Vivian Hor, a food scientist graduate from the University of Missouri, whose full-time job revolves around recipe development and quality control, and four part-time staff—each of whom produces a full pallet of waffles each week. That’s a whopping 1,500 waffles per day.

These part-timers arrive from classes at Saint Louis University and Washington University to flip waffles in four-hour shifts—plus each has a task that fits within their major. Start Right’s first hire, SLU student Jake Dobry, cooks waffles three shifts a week this semester while managing the startup’s in-store demo team. 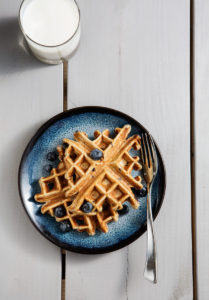 Right now, the startup’s main competitor is Van’s Foods, says Rood. Those waffles are organic, gluten free, and even come in a high-protein version. “However, their waffles don’t use complete protein sources and only provide 6 percent of the daily recommended value (DRV) of protein, while our waffles provide 28 percent,” says Rood.

This isn’t Rood or Matthews’ first rodeo: the four and a half years before they launched Start Right were filled with learning lessons—but all of them helped the entrepreneurs prepare for their current company. They met through MU’s BioDesign program, where their task was to find needs in surgeons’ operating rooms. The solutions they found for those gaps became startup companies—which ultimately failed after two years, despite both men working full time on them. “But in those failures, our experience led us to refine our business development plan, to one of ‘Expedited Cautiousness,'” says Rood.

Matthews defines EC, as they abbreviate it, as “moving as fast as you can, while giving appropriate amounts of thought and time to flushing out as many risks as you can. Think swift cynicism.” Although it’s applicable across each aspect of the business, Matthews considers the most important part the people—growing a company is daunting, but as much as you can DIY it at the beginning, you can’t expand without additional hands on deck.

“After working together now for almost five years, our dynamic has become much more important than our individual experiences,” says Rood. “We’re able to quickly resolve issues, readily alter our trajectory, and can rely on each other to manage different aspects of the company without having to micromanage.”

Their experience has also taught them that maintaining relationships is a critical part of business success. One of their first startups, an Arch Grants-winning medical device company, was gifted pro bono marketing and design from Spoke Marketing as part of the prize. “Despite the fact that we had just let them know we were planning to shut down that company, effectively tossing out all their hard design and marketing efforts over the past year, they were eager to hear how in the heck we switched from a medical device to flipping waffles!” says Rood. “So, with a peace offering of hot fresh waffles, we asked them to partner with us in our new venture.” Spoke came on board for the full shebang: packaging, branding, color scheme and website. “A year and a half later, we still call on Spoke to help us with new designs and marketing efforts,” says Rood.

The product itself has also changed along the way, and they’ve learned to react to changes outside their control: “When we launched, we actually sold Belgian, blueberry, and chocolate espresso flavors. Unfortunately, we had to discontinue our chocolate espresso line, as they no longer make one of the ingredients we used in the recipe! However, our apple cinnamon flavor has filled in nicely and is giving blueberry a run for its money for most popular flavor,” says Rood. 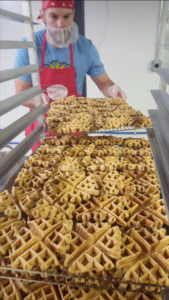 In October, Start Right upgraded their space by moving into their massive kitchen, once occupied by a local creamery. The addition of a walk-in freezer has allowed them to control production in a way they hadn’t before. They’ve also begun distribution in grocery stores, thanks to Matthews’ distributor and grocery contacts in Springfield, who were eager to support a hometown entrepreneur. Their first-ever order was for 18 boxes—”We thought we were hitting it big time,” says Rood—but their first delivery last month to Springfield was for six pallets, or just under 3,500 boxes.

They’ve also somehow found time to get involved in St. Louis’ startup scene: “Along with the expansion, we’ve been making appearances all over the startup scene in St. Louis, hosting dessert at the Arch Grants Gala, serving waffles at [email protected]’s Waffle Wednesday breakfast, and winning a few awards at WashU’s Startup Connection,” says Rood.

Now, Rood says the company is beginning to develop products outside of their original waffle line, and they hope to launch at least two new products next year—though he can’t spill much more than that at the moment. They also plan to continue to expand to grocery stores that have expanding health-food aisles and incorporate wellness into their overall strategy. “Our goal is to become a household name, recognizable as the ideal source for a convenient, high-protein breakfast,” Rood says.