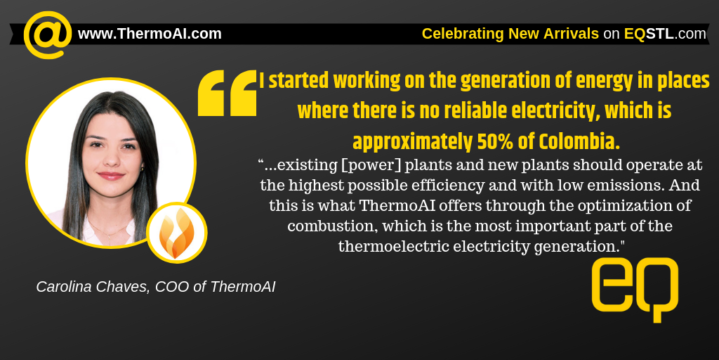 Wind, solar and other renewable energy sources are most often the focus of innovation in the energy space because, unlike coal and natural-gas fired combustion, they do not pollute the air. Although clean air is desirable, the reality is, we are a long way from implementing renewables that meet all the demand.

ThermoAI Founder and CEO Aiden Livingston, COO Carolina Chaves, and CTO David Watson have joined to form a perfect storm of knowledge that offers the technologically-challenged energy industry a machine learning solution that will increase efficiency and decrease emissions in combustion-based energy production. 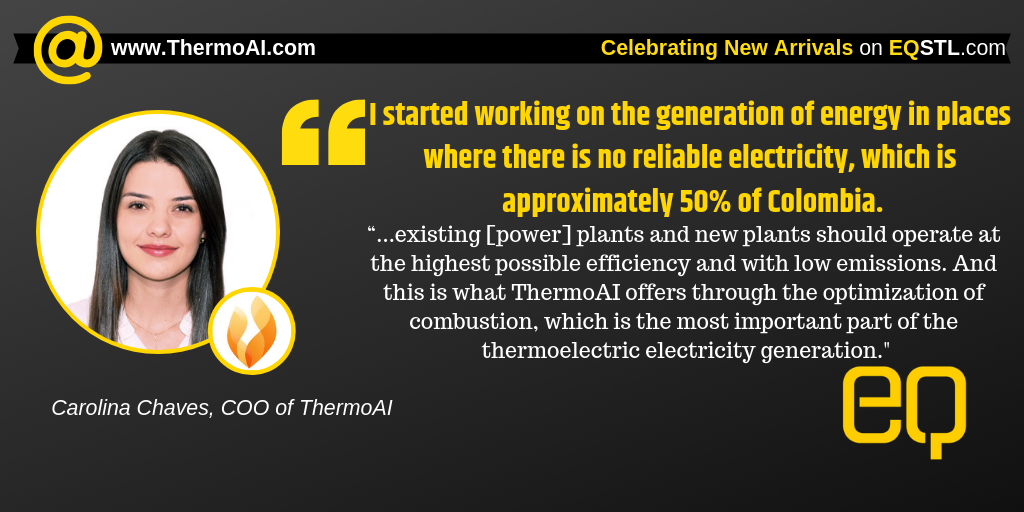 Their solution is based on the research of ThermoAI’s COO, Carolina Chaves, who was investigating he possibility of optimizing non-renewable sources of energy in Colombia, as 50% of the country has no access to reliable sources of electricity. Her research became the foundation for a new company.

Enter ThermoAI, 2018 Arch Grant recipient, an energy company that operates in the window of time between now and the 100% renewable-energy future, in which we are still dependent on combustion for energy.

“Evidently the demand for electricity is growing and this is largely due to the electric car market that is growing. While more electricity is needed, existing [power] plants and new plants should operate at the highest possible efficiency and with low emissions. And this is what ThermoAI offers through the optimization of combustion, which is the most important part of the thermoelectric electricity generation.”

“I get the desire to focus on renewables,” said Livingston, making the business case to EQ. “But isn’t that a little crazy, when you get 82% of your income from something and you’re not actively interested in improving that process? You’re probably still going to be using it for the next 30 to 50 years. Isn’t the responsible thing to do it as efficiently as possible?”

Renewables can’t meet demand when most energy is needed. Wind and solar energy are made during the day, yet the highest demand for energy is at the end of the day.

“During certain peak times, like around five o’clock pm, everybody gets home, turns on the lights, opens the fridge, and starts cooking,” Livingston said.

“Every time you turn on a light, the energy company needs to produce a little more power to match the exact load. It’s very hard for intermittent fuel sources to do that and that’s why we still use fossil fuels so much. It is much easier to provide by demand.”

Solving the demand problem will take some time. “Unfortunately, it appears that a 100% renewable energy future is still a ways off,” Watson said. “We need to do everything we can in the meantime to mitigate the effects of greenhouse gas emissions, and I believe that machine learning is going to play a major role in realizing that vision.”

ThermoAI has developed artificial intelligence that is installed on top of the existing management system for a traditional boiler. The AI takes regular measurements and
optimizes the combustion process by automatically making frequent adjustments to how the boiler operates.

The solution they are developing promises to cut emissions by 15% and also save on fuel. The AI solution optimizes combustion through its hypersensitivity to the atmosphere and ability to adjust automatically to changes.

“It’s very exact, everything influences it, said Livingston. “The weather outside, the humidity content, the exact humidity content in the fuel–all these things are going to change the exact chemical reaction.”

This is in contrast to normal combustion which, according to Livingston, only allows for maximum and minimum operation settings, and does not allow for changes due to external influences.

Livingston and Watson were hiring software developers for another AI project at Universidad Nacional de Colombia in Medellin, when Livingston found out that one of the developers they had hired, Carolina Chaves — now ThermoAI’s COO — was also a chemical engineer.

“I became aware of her research in combustion optimization and I realized it was a great machine learning problem,” Livingston said. “Even though it is super complicated, there was one right answer that we could numerically arrive at. It wasn’t subjective. In addition, it represented a much bigger market — energies. It’s massive.”

Much of Chaves’ research is based on using a customized Stirling engine for power generation.

Robert Stirling invented the Stirling or “hot air” engine in the nineteenth century, likely inspired by the danger posed by steam boilers that frequently exploded at the time. The Stirling engine is unique in that it uses cyclic compression and expansion of air at different temperatures to produce mechanical work.

In addition, unlike other engines, heat sources for the Stirling engine may include a variety of gases, wood, sawdust, waste, solar or geothermic energy. The result is an extremely efficient engine.

Chaves’ inspiration grew from the need in her native Colombia for more reliable energy. “I started working on the generation of energy in places where there is no reliable electricity, which is approximately 50% of Colombia,” she said.

“This engine functions as a hybrid system, working during the day with solar energy and at night with the energy coming from biomass combustion. The result is an extremely efficient, low emitting energy production process.”

“After doing this project, I got involved in the fluid dynamics and heat transfer simulation of the combustion and also optimization. My idea for this, was once again to help the most at risk communities, by decreasing harmful emissions through optimizing the combustion process.”