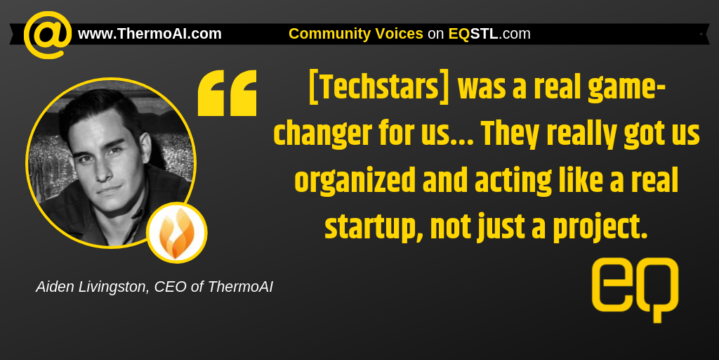 It was a Global Journey Through Entrepreneurship that Landed ThermoAI in St. Louis

2018 Arch Grant recipient, ThermoAI, is an energy company that operates in the time between today and total renewable energy future, in which we are still dependent on combustion for energy.

Moving to St. Louis made sense for the ThermoAI team since the Midwest is close to their energy customers. They made the rounds gathering knowledge, experience, and connections before they got here. 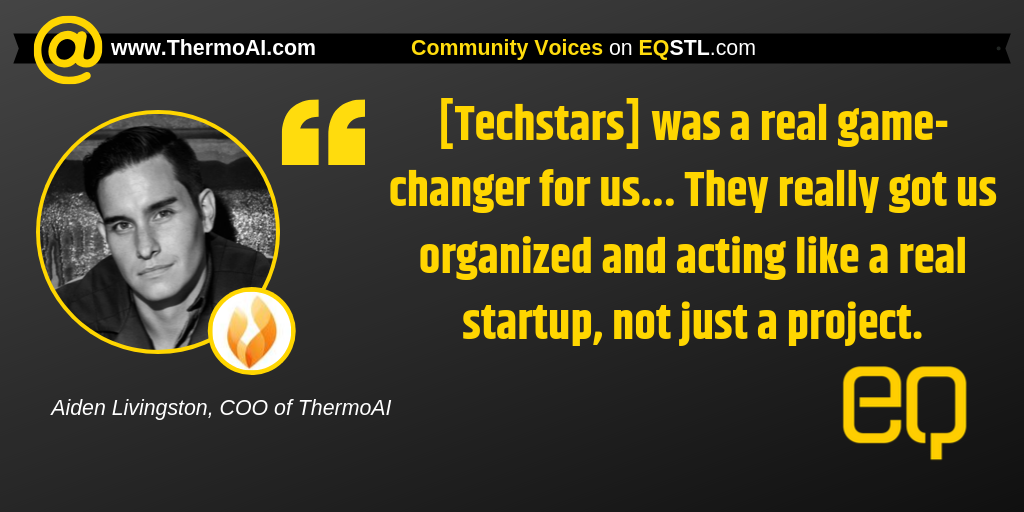 Starting on the Path

Raised in Calgary, Alberta, Canada’s energy industry capital, Livingston was aware of the potential for applying technology, specifically machine learning, to the energy industry. When they learned about Chavez research, lightbulbs started going off for Livingston and Watson.

“I know what these guys pay for things. I thought that if we could produce 1% efficiency, it’s a huge impact. And like I said we’re already now looking at like 10 to 15%,” Livingston said.

With this idea in hand, but without completely developing it, they applied to a number of accelerators.

“I thought let’s put the idea out there and see if there’s any interest. If not, maybe we should come up with a new idea, “Livingston said. “ Because we didn’t have any progress to show we got shot down a lot. Then I was almost to the point of maybe we should look at another idea, and we got into Startup Chili and I was like, I guess we’ve got to do this now.”

Next Stop Chile. Then Montreal.

Startup Chile is a public accelerator sponsored by the Chilean government and is known for being one of the largest startup communities in the world. ThermoAI developed a pilot program there and began building focus around the idea.

From Startup Chile, ThermoAI advanced to TechStars, a renowned global accelerator in Montreal. They found out about the opportunity through word of mouth in the Startup Chile ecosystem.

“One of the people in the cohort, a friend from Montreal, recommended it to us because they had heard TechStars was doing a focused accelerator on AI. He offered to connect us to the managing director, who was great,” Livingston said.

ThermoAI got to the final call with TechStars and felt overwhelmed with the depth of the questions coming from the investors. They were concerned that they hadn’t answered all of them adequately.

“They had all these people on the call, and they asked a lot of follow-up questions and we got off the call and we said, ‘okay, that’s it. We’re done’,” Livingston said.

Three weeks later, they were told they had been accepted. “It was a real game-changer for us,” Livingston said. “They really got us organized and acting like a real startup, not just a project.”

ThermoAI applied for an Arch Grant, in part, because of their belief that it made sense for their company to have a presence in the Midwest. As with TechStars, they got the recommendation to apply from one of their colleagues from Startup Chile.

“I love New York, but it makes no sense for us, since in the energy industry, our clients are in the Midwest and in the south,” Livingston said. They applied and were accepted in 2018.

Arch Grants was founded upon the idea of early-stage startups coming to and eventually relocating to St. Louis. So now thanks to Arch Grants team, ThermoAI is working with the combustion labs at Washington University, and is working to develop dedicated combustion research facilities to further build out their machine learning models and proprietary data sets.

They have even started applying for research grants with Washington University to fund the research and development of ThermoAI. As many of their existing pilots are now converting to paid clients, they have started talking with investors and will soon be officially opening a funding round with some of the top technology venture capitalist in the US.

Once they close their round they are looking to expand their team in St Louis to assist with the ongoing research and development at Washington University.