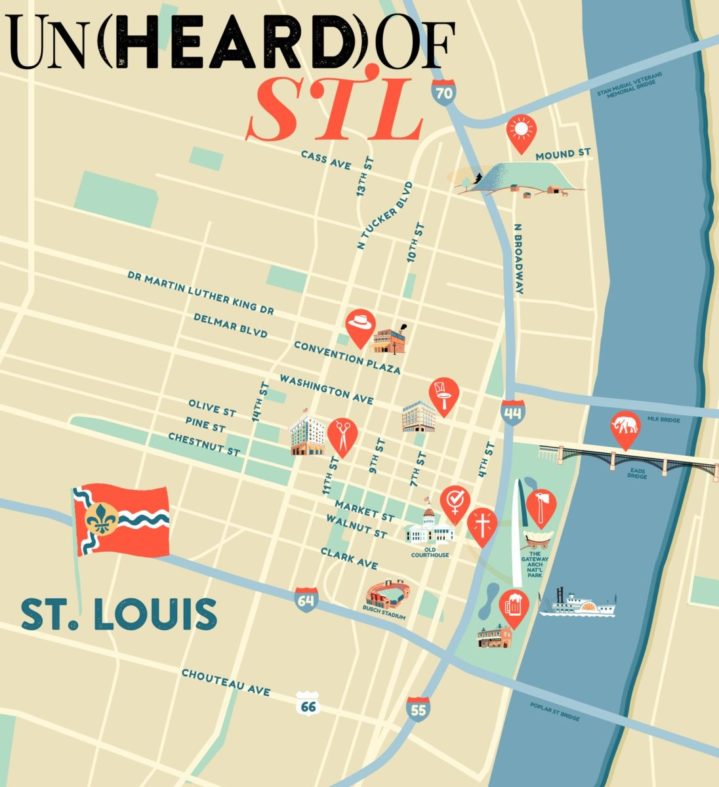 Unheard of STL is Contextualizing Physical Spaces with Sound in Downtown St. Louis

Unheard of St. Louis will be showcasing their audio mapping project at the Tower Grove Market on Saturday, July 13.

Riding MetroLink across the Mississippi, you can listen to a story about the bridge’s famous inventor/engineer James Eads and the opening of his “improbable bridge” —while you are crossing it.

Walking by the Old Courthouse to lunch from your downtown job, you can be introduced to St. Louis’ Original Suffragette, Virginia Minor, who sued in that very spot for her right to vote. Visiting the St. Louis Blues Museum on Washington Avenue, you can discover that St. Louis had its own Lunch Counter Protests right there, at the former Styx, Baer and Fuller department store.

By contextualizing spaces in St. Louis with the sound of their unknown stories, Unheard of STL raises awareness about historical events people may not know about that happened right under their feet.

Audio Artist Adam Frick-Verdine, the entrepreneur behind non-profit Unheard of STL, is a 20-year veteran of independent film and television sound design. He is convinced that audio and sound have an expanded capacity to impact human experience due to advances in technology, such as the Podcast and smart phones.

“More and more as I do different projects, I believe in the power of stories to influence people. The specific use of sound to tell stories helps people better understand themselves and the world around them,” he said. “The idea is to contextualize the space and history downtown, lead people to stand where events happened, and hear from the people who made it happen.”

What Is Unheard of STL?

Unheard of STL is a unique mapping project and website that offers free geo-located audio vignettes of historical events that happened near where you happen to be. 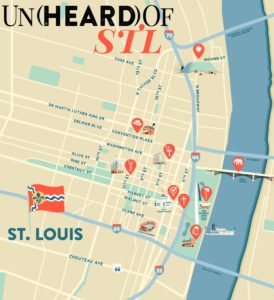 Today, there are ten different stories about downtown St. Louis to listen to. The interactive audio map produced by Sonic Stories with the support of the Regional Arts Commission and the Missouri Humanities Council went live on June 1.

Frick-Verdine encourages listening to the vignettes near and around the geo-located places they represent, although it’s not required. “Stories on the site are accessible anywhere and anytime, but the experience is cooler when you’re standing right there, and you can see that you are at that location on the map,” he said.

In addition to the website, podcasts of each story are also available on Google and Apple apps.

Shopping for the Journey West

The story “Shopping for the Journey West”, is geo-located on the Unheard of STL map at Gateway Arch National Park since the historically accurate setting for the story, Henry Shaw’s General Store, was located near the riverfront between Market and Chestnut. As you listen, you hear a pioneer woman talk over a list of supplies she is planning to buy with the shopkeeper. Her family is heading west over the Oregon Trail in 1839.

The shopkeeper advises the woman about what to expect on the journey, which supplies will be most useful and why. Lively and engaging dialog with the woman’s children running in and out of the store touches on what St. Louis may have been like at the time, who some of Shaw’s other customers were, and what life could be like when the family got to their destination.

This is just one of the ten stories offered on the audio map.The map also offers visual documentation of the scene by accompanying the audio with images of an authentic sales sheet from an actual May of 1839 westward expansion purchase at the shop.

Roots of the Big Idea

Frick-Verdine has been providing sound design for independent film and children’s television for more than 20 years.

He started his career in Chicago, but has been in St. Louis for more than 10 years. His jobs in film and television require him to create sound that seamlessly accompanies the visual message on the screen.

His favorite creation in this arena is from an independent film, The Makings of You, made in St. Louis in 2013. “We used a combination of trains, river sounds, wind, wind chimes, and glass tones to create a soft and subtle feeling of a St. Louis summer afternoon, ” he said.

He says a lot of sound design for film and television can is subjugated to the vision of the television show or film rather than created for its own merits: “It’s very literal–footsteps across the screen, for example.”

Recently, Frick-Verdine has been exploring the impact of using sound alone to tell stories. As an adjunct professor at Webster University, he debates the merits and meanings of sound in Audio Aesthetics and Technology classes.

“For me, it’s really about crafting any kind of sound into something new. Sometimes it’s just grabbing existing sounds and putting them in new contexts. That in itself creates new worlds and spaces.”

Fablist, another of Frick-Verdine’s projects, takes traditional fables from around the world and produces them as free podcasts for children. For Pear Blossom, the project’s pilot story, he said creating audio that gave just enough information but not too much was particularly interesting.

“I had to make the sounds of a giant mythical ox that runs through a field and pulls all the weeds,” he explained. “That was a challenge to create since we hadn’t fully revealed what the creature was yet, so making it convincing without much context was fun!”

Frick-Verdine says the idea for Unheard of STL started with his four daughters. “Years ago, I took the older two to the St. Louis Zoo and I realized that they were seeing the animals but not hearing them because they weren’t making any noise,” he said.

Already engaged with museums around town on applications that could provide sound, he started thinking about how to engage the Zoo space with sound. As he got to know the city, he developed a familiarity with downtown activity.

“People who are downtown have down time,” Frick-Verdine said. “They are literally standing where something cool happened that they don’t even know about.”

Unheard of St. Louis will be at the Tower Grove Market on Saturday, July 13.

They plan to spray paint Unheard of STL logos downtown at the map sites to help people know they are in the right place on the map. Unheard of STL is also collaborating with alternative St. Louis history and architecture tour company Renegade STL on an event planned for later this summer.