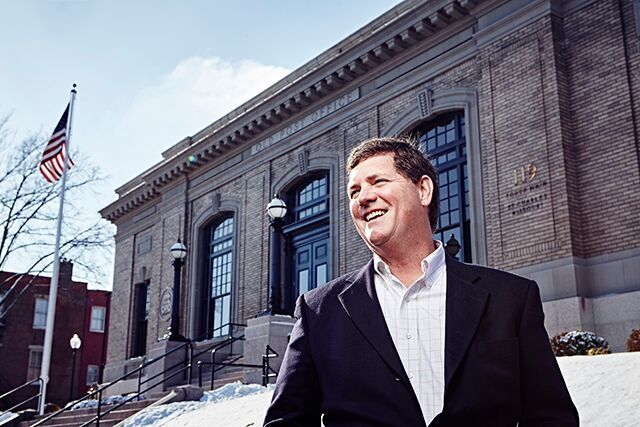 A River Runs Through It

How entrepreneur Randy Schilling is building a different kind of startup community in St. Charles.

Several hundred feet from where Randy Schilling is seated in the Old Post Office Startups (OPO) building, the Missouri River is flooding Frontier Park in St. Charles, Missouri. It’s the last week in December and the still-rising water has drawn the attention of iPhone-waving families still recovering from the holidays and hungry for Instagram-worthy material.

But, for Schilling, the ebb and flow of the river is nothing of note. Back in 1992, right in the building next door, he founded Quilogy, a managed hosting and tech education company. He can still remember the famous flood of ’93.

“The water had run up to the parking lots of the buildings across the street,” he says. “This one won’t be nearly as bad.”

Schilling has weathered varying conditions—business and otherwise—in his hometown of St. Charles. He grew Quilogy through the advent of the Internet, recession economies and mobile technology fads, expanding the business to more than 520 employees and more than $42 million in revenue at its peak. In 2010, he sold it to Aspect. As part of the deal, Schilling maintained his ownership of the real estate: six buildings on St. Charles’ Main Street.

Just a year later, Schilling made use of one of those buildings when he founded BoardPaq, an app that helps executive boards manage paperless meetings. In 2015, the company cleared $2 million in revenue.

“Randy’s sheer persistence is the strongest mark of his leadership style, and that is a lesson for any leader: Press ahead. He does not focus on obstacles, and instead, looks for opportunities,” says Greg Prestemon, president and CEO of the St. Charles County Economic Development Center. Prestemon is also president of the Partners for Progress of Greater St. Charles (PfP), a civic development nonprofit.

Fueling Schilling’s drive is a vision for the St. Louis region and, specifically, for the role of his hometown, a place he views as rich with a legacy of creativity and entrepreneurial gumption. According to Prestemon, tech-based companies and startups have been a part of the heritage of St. Charles County for years. Even before Quilogy, the local economy featured rich diversity.

“St. Charles has been home to a lot of tech-minded people, and that trend goes back to the ’80s,” says Prestemon. “When McDonnell Douglas had its big decline in unemployment, other industries and technology startups began to emerge. We have a lot of homegrown enterprises that may not be familiar in the sexy tech scene, but any place in the US would love to have them.”

Schilling’s vision might just be coming true: In December 2015, St. Charles County was ranked best in the state for tech job growth, according to recent data published by the Progressive Policy Institute (PCI), a Washington, D.C.-based think tank.

The idea of Main Street St. Charles as a tech startup hub began to take greater shape as BoardPaq grew. Schilling noticed a number of creative- and tech-based startups popping up around St. Charles’ downtown area with a need for the entrepreneurial structures of space, funding and networking.

“Back in the 1990s, the gathering place for making business deals was the country club,” says Schilling. “I saw that people were already gathering in coffee shops with laptops across this area. We wanted to create a space that would be today’s ‘country club’ for entrepreneurs to serve that human need of collaborating with others.”

On Halloween of 2013, Schilling purchased the Old Post Office at 119 S. Main St., a structure that had been greatly underutilized for many years, he says.

While keeping the building’s historical nuances intact, he outfitted it with every modern necessity for a co-working space: Open office spaces, conference rooms, cell phone booths, high-speed Internet, a bar, collaborative spaces and pingpong. He also gathered support from community partners, such as PfP, which supplies full-time staff to run the facility, and Lindenwood University.

Now, OPO Startups is composed of the original post office building and an annex. In less than one year, it’s grown to host 33 startup companies. Schilling expects that number to double by the end of 2016.

Meetups called “Startup Wednesdays” with free pizza and beer further that collaborative vibe. Each week Schilling invites founders, funders, mentors and community members from across the region to OPO for unique programming, guest speakers and an opportunity to network, learn and grow.

“We have the chance to foster a greater sense of community,” says Schilling, who’s also education chair of PfP. “When you have a group of people who are passionate about what they do and where they live, then we have a chance to increase the quality of life for everyone.”

The Magic of Pizza, Beer and History

During the past five years, words like “co-working” and “incubator” have become part of the region’s mainstream lexicon. And since its advent, OPO has joined the likes of T-REX, Cortex, Nebula and TechArtista in offering a viable space for collaborative creativity and innovation to take place.

“I am impressed with the collaborative spirit that is in place with entrepreneurship in St. Louis,” says Prestemon. “I think OPO’s role in the region is not that different from the one that T-REX plays on Washington Avenue in downtown St. Louis, and it attracts entrepreneurs in the western part of the region for convenience and a laid-back atmosphere.”

The laid-back feel Prestemon refers to is the Main-Street-of-America vibe in St. Charles. Schilling points out that the juxtaposition of historical buildings, a natural setting near the Missouri River and a slower-paced lifestyle, combined with creative, cutting-edge personalities, is a great recipe for innovation.

“This area lends itself to creativity. Just out the front door, there are local places for coffee, beer and pizza. That’s a powerful combination for entrepreneurship,” says Schilling. “There are parks, the Katy Trail and epic historical buildings. And none of it is manufactured.”

Prestemon predicts that the type of entrepreneur attracted to OPO might not be looking to build valuation for an exit within a handful of years. They might look more like Schilling: a visionary who wants to build a business and retain ownership for a longer period of time.

“It’s not just for tech entrepreneurs,” says Andrew Tessmer, chief operational officer at XLR8, an entrepreneurial match-making company housed at OPO and one of its original tenants. “There are e-commerce companies and independent entrepreneurs who are focused on a lifestyle business. So there’s more than just entrepreneurs focused on an exit.”

So far, the 33 companies that make up OPO are as diverse as the motivations can be when starting a company. Some companies, such as Red8 Interactive, are based outside St. Louis and are looking to make a presence felt in the region. Others are tech or design companies hoping to carve out their market niche.

“This place is about buy-in: It is what you put into it. So we’re looking for people who don’t want to just run their business from their desk,” says Schilling. “We are looking for entrepreneurs who want to collaborate and leverage their talents. I’m not in it just for a real estate play or to build more offices. Everyone can contribute to this space.”