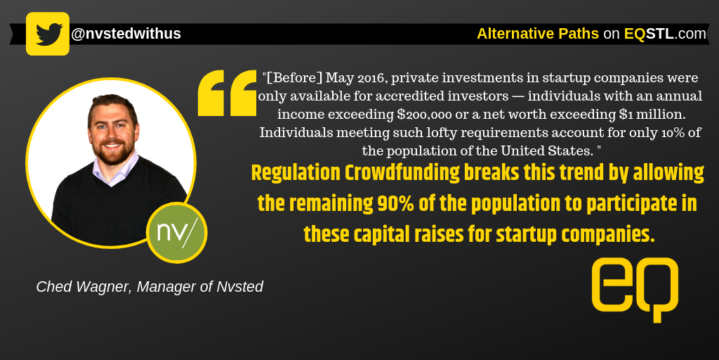 An Introduction to Regulation Crowdfunding

On April 15th, Ched Wagner, Manager of Nvsted, is hosting a panel discussion at EQ Leadership Labs on Crowdfunding Your Business.

Yet, individuals meeting such lofty requirements account for only 10% of the population of the United States.

On April 5th, 2012, President Barack Obama signed the Jumpstart Our Business Startups (JOBS) Act, a revolutionary piece of legislation that was designed to change the way small businesses can raise capital. There are many parts of the JOBS Act, but one section in particular, Title III, has gained the most attention because it specifically allows for companies to use crowdfunding to solicit investments from more people around the United States. 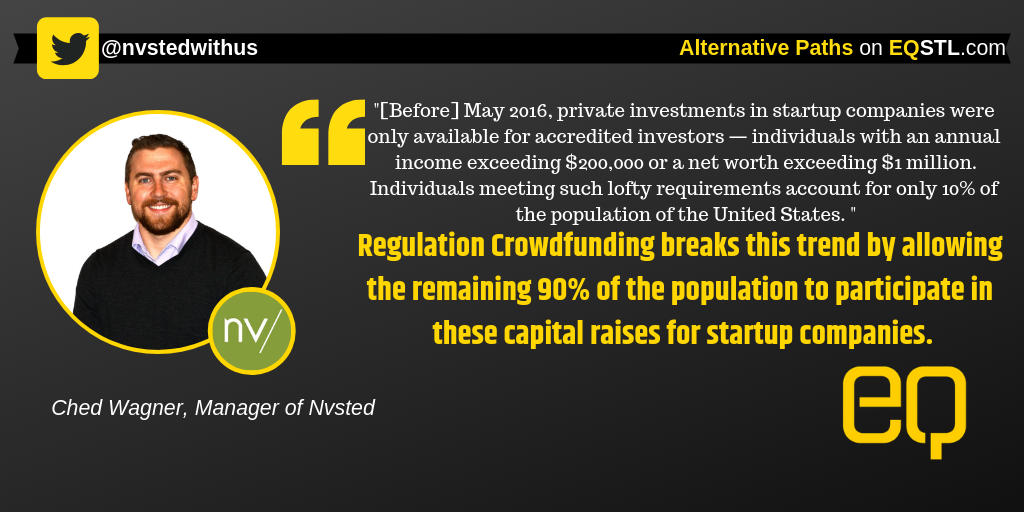 Title III of the JOBS Act, more affectionately known as Regulation Crowdfunding (Reg CF), is ground-breaking because it allows everyday investors to participate in the startup’s capital raise efforts. Thanks to the rule change, companies may now raise money by offering securities (equity or debt) to everyday investors.

Since Reg CF was brought into effect, the industry has grown rapidly, seeing nearly $200 million in investment commitments in the 2.5-year span.

In 2018 alone, 680 companies raised $109 million from 148k investors. Companies offering securities under Regulation Crowdfunding are able to raise up to $1.07 million in a 12-month period, and 19 companies were able to raise that maximum amount in 2018.

Reg CF is not only becoming an effective way for startups to raise capital, it is also starting to show substantial progress in its goal of supporting the United States economy. Sherwood Neiss, one of the earliest proponents of securities crowdfunding in the U.S., is quoted in a recent article by Crowdfund Insider as saying, “Back in 2012, the promise of Regulation Crowdfunding was jobs, a local economic generator, and an industry revitalizer.

With the close of the third calendar year of Reg CF we can see that those promises are holding true. Reg CF is proving to be a jobs engine (creating on average 2.9 jobs per issuer), economic generator (pumping over $289 million of revenues into local economies) and industry supporter (enabling 82 unique industries in regions across the USA).”

Although Reg CF has generated only modest investment numbers so far, there is optimism that the current growth of the industry is just the beginning of a larger change. There has already been substantial discussion and legislative acts aimed at making the industry more appealing by increasing the maximum raise amount from $1.07 million up to $5 million, allowing for Special Purpose Vehicles (SPVs) to be used, and permitting companies to “test the waters” prior to starting a crowdfunding raise.

If you are a startup founder and are looking for ways to raise your next round of capital, Regulation Crowdfunding may well be your answer.

Companies local to St. Louis, MO, can utilize the regionally-based Nvsted funding platform, which was created with a hyperlocal focus specifically for St. Louis startups.