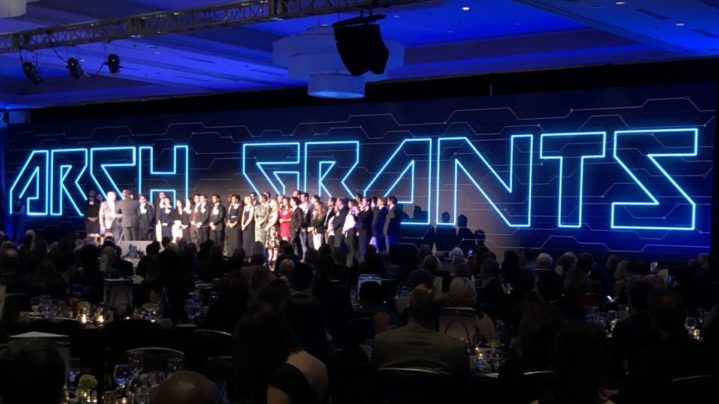 Recently, you may have noticed a bunch of mysterious tweets from Arch Grants that are just blue photo portraits with unnamed captions like, "An entrepreneur sees potential that others cannot see," and momentarily wondered, "WTH did they forget to tag the photo?" ...and then buried your head right back into #doomscrolling. Well, now we know! Nope, they didn't forget... it was all part of a master plan to launch a new website, grant program and marketing campaign that seeks to "Champion the Bold." EQ has not spoken to anyone at Arch Grants yet, so we're just learning about this now and strongly recommend you visit the links to the breaking news stories on the Post Dispatch and Business Journal for the official word on these exciting developments.

You might have noticed a bunch of mysterious tweets from Arch Grants recently that are just blue photo portraits with unnamed captions like, “An entrepreneur sees potential that others cannot see,” or “Be a part of the movement in St. Louis,” and momentarily wondered, “WTH did they forget to tag the photo?” …and then buried your head right back into #doomscrolling.

An entrepreneur sees potential that others cannot see. pic.twitter.com/vjOZoc82SR

Well, now we know! Nope, they didn’t forget… it was all part of a master plan to launch a lovely new website, grant program and marketing campaign that seeks to “Champion the Bold.” They’ve even got a new logo to boot.

The new logo is especially cool because not only does it finally dispense with The Gateway Arch (does everything need to be an Arch in STL? Obviously NO), but it also reminds me of a ‘House Banner‘ from the video game, Destiny. Which, if you think about it, really fits their new brand and vision well, as it taps into the values of team sports, virtual teams, heroes and champions, rallying points, playing to objectives and the word that pervades startup ecosystems everywhere: “cohorts.”

(Look, I’m just gonna run with this eSports analogy now as I’ve stuck “bro” in the headline and gotta just commit to the mistake. I’d say it also reminds me of a bookmark icon, which has nice and relevant allusions too.)

$100k Grants for Those Who Stand Out and Stay

David Nicklaus over at the St. Louis Post-Dispatch just broke the news that “Arch Grants will award additional money to some past winners“. According to Nicklaus the big news is that executive Director, Emily Lohse-Busch has said that Arch Grants plans to award “at least a few hundred thousand dollars” in growth grants next year specifically to boost past recipients who have continued to operate their companies in St. Louis beyond the contractual 1-year mark.

The new growth grant program will award up to $100k but it will be varied according to needs of the recipient companies. The program has been launched as a result of findings from an internal review that found a need to create a “dynamic nesting environment” (which echoes a lot of STLMade’s messaging of “Start-up, Stand-out and Stay.”)

Be a part of the movement in St. Louis pic.twitter.com/9WzCgjacm6

Nathan Rubbelke has also posted a story on the St. Louis Business Journal too, which echoes some of the insights from Nicklaus but also adds that Ronak Sheth, the former CEO of Label Insight, will act as Entrepreneur-in-Residence and help provide support and strategy assistance on-demand.

New Capital Connections Have Been in the SkunkWorks for Awhile

EQ has not spoken to anyone at Arch Grants or the other publications to confirm any further details on the news, but from our previous coverage we can tell you that this news is the best kind of surprise, i.e. “a surprise that’s not actually surprise.” Which is to say that the news is unanticipated, but not unexpected, as we saw themes from this strategy emerge at the Merge Summit in 2018 and again, just over a year ago, during the Chaifetz STLaunch competition.

It’s great to see the Arch Grants team have the tenacity to follow this line of thinking through the last 18 months and put the strategy at the heart of the new brand. And through taking on an EIR, I love that they continue to build relationships that entrench access to capital and mentors from other cities like Chicago too.

Obvious vision is obvious, and I mean that in a good way.