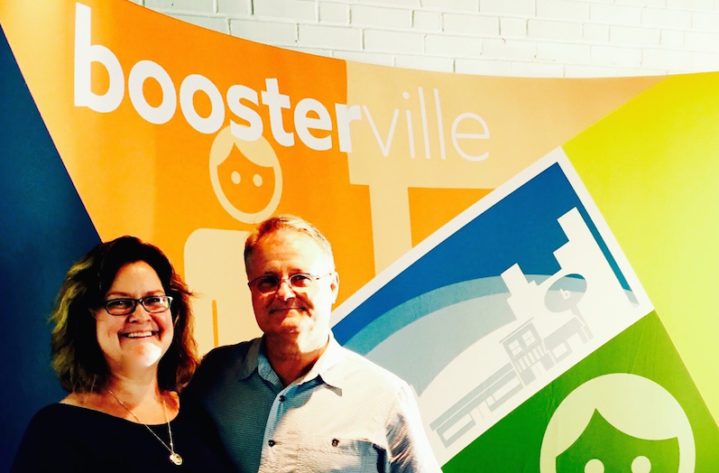 If you’ve ever been hit up by an angelic-faced grade-schooler peddling magazine subscriptions or an eager trumpet player asking for donations so her marching band could travel to a far away parade (isn’t that all of us?) you’ll want to learn more about Boosterville.

Headquartered in Indianapolis, Boosterville is a transformational payment platform where supporters of nonprofits, schools and charities can purchase their everyday items from local merchants knowing a portion of the sale goes to benefit their favorite cause.

Co-founders Pam and Tom Cooper harnessed their unique business experiences and skills to create the company in 2013 and have since participated in accelerators in Memphis and St. Louis’ own Prosper Women Entrepreneurs (PWE) Startup Accelerator.

Pam took time to talk to us about her PWE experience, diving into the startup scene later in life, and about why doing their homework before launching served Boosterville well. 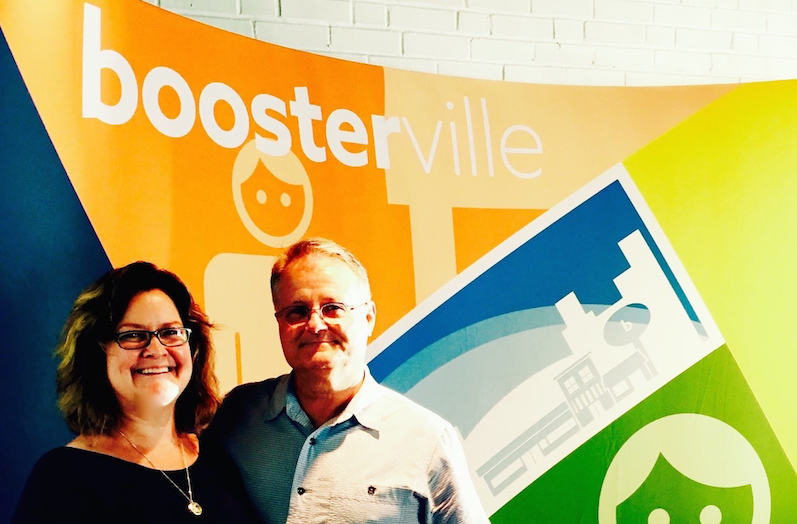 Talk to me a little about the beginnings of Boosterville, what were you doing before and then where did the idea come from?

I had a franchise service company for about 20 years and it was a high-end upholstery and carpet cleaning company. I was also frequently the fundraising chair for my kids’ school organization.

When I married Tom [Cooper, Boosterville’s CTO and co-founder], we started toying with the idea of working together on a project. We came from very different work experiences, I was certainly not a tech-oriented person at all, so we considered where we could find some intersections of our interests and we came upon this school fundraising idea.

On top of my experience, my mom was a high school marching band director, my sister and niece are high school choir directors, so I know from experience that there is no innovation available in this field. We started talking to the National PTA and an organization here in Indianapolis called National Music for All to see if there were innovations in fundraising, specifically technology plays, that they were aware of and there weren’t.

Then we started looking at the size of the market and found that it’s about $5 billion worth of wrapping paper, cookie dough and trinkets that nobody wants being sold every year to raise money for schools. I knew as a merchant myself that I was hit up on a nearly daily basis with requests for donations, but at the end of the day I was in business to meet payroll and make a profit and I was unable to give much away.

So having all of that background, research and information, we said, “How about instead of buying a bunch of junk you don’t want out of some catalog, let’s find a way to buy products from merchants in your neighborhood or anywhere else—products that you actually want and need.”

We simply looked at where we were, and decided there had to be a smarter way to raise money. We’ve been running the same fundraisers for about 60 years. It was time to find another way.

Talk a little about selling to merchants and businesses.

We recently started an agreement with a major credit card network at the end of March. Before that, we had been trying to learn how to get in that intersection at that transaction without having to be integrated into any number of different point of sales systems for merchants or different credit card processing systems that they used.

So we took a step back, and the people that do all of that work is the credit card network. So we’d been studying this problem and creating the backend, using other iterations of this same solutions, but when we signed with the major credit card network to get the transaction real-time data directly from their network, it made everything streamlined and reduces friction for both our merchants and our users.

And how do you get in front of the schools and organizations to get them involved in using the technology?

We’ve made a strategic investment in the National PTA because we know that grade school PTA and PTOs are where the majority of those brochure sales takes place. We knew that having a grea tline of communication with that organization was key.

One thing they noted was that a lot of their fundraising plays are candy bars or cookie dough and National PTA is really trying to fight childhood obesity; so how could they promote both of these things at the same time? It was a conundrum for them. So they really like anything new that’s appealing to their next-gen/“not your mama’s PTA parents”, engaging with working parents where they are and the digital native parents to give them a new solution more appropriate to today’s parents of young children.

How did you get involved with PWE?

I’m a female CEO of a tech company. Additionally, I’m from Southern Illinois so St. Louis is our go-to place; my brother still lives in St. Louis.

PWE was a perfect fit for me and the place where I knew my company could grow to the next level.

What was the biggest thing that you and Boosterville gained from your PWE experience?

Most people don’t realize that PWE looks for participants who are a bit further along; companies that (preferably) have a working product and significant/meaningful equity. Because we were a little farther along with our idea, we were looking for validation in the marketplace and with investors.

We are a transaction-based platform, so until all of that integration is complete, we can’t show any revenue because that revenue comes from transaction. Having seasoned entrepreneurs with tech knowledge on our side, combined with the SixThirty and Cultivation Capital groups working together in the St. Louis entrepreneurial ecosystem, those advisors are shared invaluable knowledge and were able to have deep discussions about what we were trying to accomplish.

It’s the personal relationships, so that you can show you have your chops and you understand what you’re doing and let them understand enough about your business so they can give honest feedback and guidance.

What had been the most challenging aspect of creating a business?

Lack of funding until we have traction on the platform. We had to make a significant amount of investment in this relationship with the major credit card network Visa and we had to just wing it on our own because we couldn’t find investors who’d invest pre-revenue.

If we went to the coasts maybe we could have, but we didn’t make that choice, so staying located in the Midwest and trying to find an avid angel to take this part of the the journey with us, has big the biggest challenge.

You mentioned you are from the Midwest, but aside from that, what is attractive to Boosterville staying in this region?

We are older entrepreneurs with responsibilities, a mortgage, a kid in college and financial obligations. Being able to pick up and couch surf sounds great, but we aren’t at the point of our lives where we can do that.

Until recently Tom was a CTO of another company during the day and built Boosterville at night just so we could self-fund it. And I sold my company so I could free up my time and put some funding towards Boosterville.

We’ve had to bootstrap because we know it’s a great idea and we just have to do everything from our side until we can get to that point where we find investors who see the funding opportunity.

And where is Boosterville at right now?

While we finish up the integration with Visa, we’ve lined up two pilot programs in the Indianapolis suburb of Zionsville and with five counties in southeast Illinois that are part of a regional office of education district within Illinois.

We have a lot of people working to say, “As soon as this is ready, we’ll use it.” That’s a lot of fan booster organizations, merchants, Kiwanis and the Rotary, etc. So we’re really focusing on building out a solution that people can easily take back to any town.

We designed it with my town of Newton, Illinois in mind, knowing everyone there knows the merchants that support the school, and the players are known to each other so you know who can help you, who supports you and who is the non-profit supervisor that can get people fired up. We are handing them the tools they need to be self-sustaining with this technology.

We’re making it as easy as possible, so all they have to do is get merchants to say yes. Once they get on board, we turn them “on” with Visa within 24 hours and get any advocate within that town to create a Boosterville account.

Then, we link the advocates Visa credit or debit card(s) and use those cards at the participating merchants. Anytime the consumer shops at Boosterville merchants, they immediately get a text or email that says, “great job, you just raised $2.50 for the Newton Marching Eagles. Next time go spend your money at Stout Shoes or Jiffy Lube because they’re also on the Boosterville platform.”

It’s a very sensible solution. In the Midwest, people here are used to saying, “I’m not going to pay money for that, I’ll make my own and we’ll be able to do the same thing.”

It’s that “mend and make do” philosophy. But this is just so logical. For a long time people said, “Why do I want to buy this candle, when I can buy it cheaper elsewhere? Why can’t I just give you money instead of buying a bunch of junk I don’t want?”

Think through a problem; don’t create a solution in search of a problem. Get out and talk to customers.

It’s been said a million times, but talk to the people who would be using the solution that you’re proposing well before you start building out software or paying an engineer. There is a lot of hard grind you can do manually without having to build the product. I’ve seen a lot of people flush a lot of money on engineering when the product wasn’t outlined first.

Secondarily, find a technical lead quickly if you aren’t one yourself. You are using that person to talk about what you would be building, after you really flesh out what the solution needs to look like, you aren’t having them build out from day one, because so much is thrown away if you do it that way.

Find the accelerator that fits you. Funding is great, but you can walk away from an accelerator with much more than just funding. The programming, advice and life-long relationships provide guidance now and can do so for your business in the future.