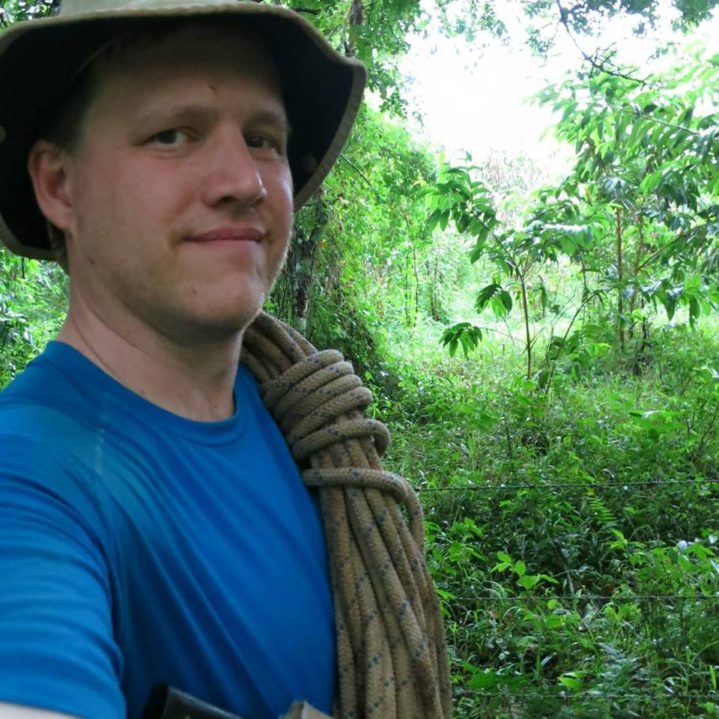 Whether you want to understand a lava tube in the Galapagos Islands, a feature on the moon's surface, or an urban neighborhood, you might want to get to know Aaron Addison.

As Director of Scholarly Services at Washington University in St. Louis, Aaron leads a team of 15 professionals in the design, implementation and documentation of research services and spatial data related technologies. As a geographer and explorer, his team assists faculty and students with research data, data visualization and digital CAVEs (“holodeck”-like digital environments) for planetary exploration and civic problem solving – when he isn’t exploring underground in real caves.

In part. I’m tied to getting normal things like available technology used in extraordinary ways. For example, the cardiovascular system is in some ways similar to a cave. Borrowing the tech and ideas from exploring caves to use “disruptively” in cardiology research is compelling to me.

Working with a graduate student who was studying more violent neighborhoods. We were able to use Google Streetview to study these neighborhoods in the CAVE, looking for associations between violent crime and physical disorder.

I got marched out of the jungle by guys with guns once, but I don’t know that I’d call that a favorite.

What’s an interesting place to explore in both virtual and real worlds?

It wasn’t me personally, but we had the Apollo 17 geologist Jack Schmitt come to the CAVE once. We knew he was coming, so a graduate student loaded the Apollo 17 landing site into the CAVE. When he came, he said he always wanted to see their landing site from the top of a nearby hill that they were never able to reach. We were able to visually take him there 30+ years later. That was pretty cool.

What are some cool places you’ve been?

I’m leading a project to document the lava tubes of the Galapagos and the Amazonian Ecuador. We saw a catfish in an Ecuadorian cave that was climbing the wall. The video I shot of it on a point and shoot camera went viral and it made the homepages of BBC and National Geographic on the same day.

I get inspired talking to people that have problems to be solved. I find I come up with 2-3 tangential ideas to explore from each of those conversations.

Beyond education/training, what prepared you for what you’re doing now?

I spent 17 years in the private sector before coming to the university, doing engineering and architecture. I was fortunate to work on hotels in Vegas, nuclear power plants, traffic studies and real estate acquisition. That cross section of experience really prepared me for my role at the university.

Who are your favorite artists or authors?

I read a lot on original exploration and see the connection to caving, innovation and entrepreneurship, where if something goes wrong, there’s no one to help you. “In the Kingdom of Ice” is about the only expedition ever to merit three Congressional Medals of Honor.

I think we need better tools to understand data. We’re really good at collecting it, but not so good at turning it into actionable information.

Where do you spend the most time?

I try to spend the most time in the field – whether that be in a different school on campus, with students, or literally in the field. I’m rarely in my office.

I try not to. My routine is to leave room for chaos. I’m not seeking it out, but I want to be able to deal with it when it arrives.

The excellent people on my team. They make it all happen. I’m all about taking a concept like agile development and applying it to research, whether I’m talking about my Washington University team or my expeditionary team.