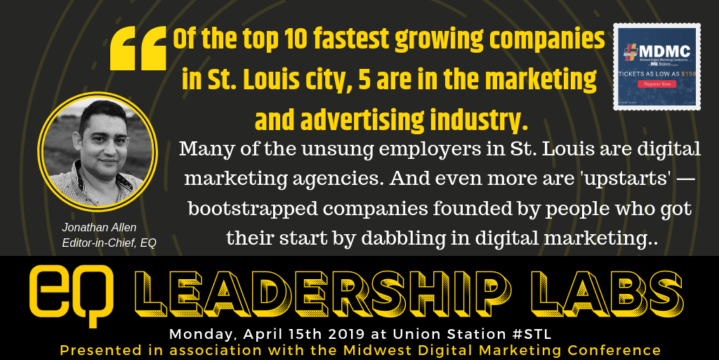 Admission to the EQ Leadership Labs is free to MDMC ticket holders and Pre-Agenda Super Early Bird tickets are offered through March 11, 2019 via EQ's new reader membership platform, the EQ Community Network. The EQ Community Network is free to join and opens up opportunities to network with other members, submit stories to EQ, post job offers, and access other regional collaboration tools.

My friend who is launching a startup recently considered applying to an accelerator, but was dismayed by the narrowness of the curriculum and the lack of depth in offerings for that particular program. “I would have liked to see them do this in conjunction with other organizations,” she said. “Build a community of resources rather than limit it to the expertise and network they have internally.”

Given the diversity and expanse of entrepreneurial resources that has grown and continues to flourish in St. Louis, my friend makes a good point. What would happen to entrepreneurship and innovation in our region if a culture of collaboration among organizations grew and expanded as well?

EQ and the Midwest Digital Marketing Conference (MDMC) have announced a new partnership this spring called EQ Leadership Labs @ MDMC that could be a harbinger of this collaborative culture. The partnership between these two entities is a model for further collaboration and extension of resources in the region.

“I’d been wanting to bring a focus of leadership development into EQ,” said Allen, “because in all of my conversations with startup founders, non-profits, economic development experts, and venture capitalists, better regional collaboration was a topic that was often discussed as one of the challenges everyone was trying to meet. Collaboration requires making connections and empowering others to take on a leadership role, so I felt EQ had a unique perspective and position from which to address that challenge.”

The idea for EQ Leadership Labs grew out of collaboration among Jonathan Allen, Editor-in-Chief of EQ, and Return to Your Power, a leadership training organization founded by Dixie Gillaspie and Philip Penrose.

“Going through my own leadership training work with Dixie and Philip helped to solidify the mission of the publication and establish a philosophical foundation to host our first-ever EQ conference; the Leadership Labs.”

With the lightning strike of his experience with Return to Your Power in his pocket, and the idea of bringing that conversation of redefining leadership to a larger audience, Allen approached MDMC to partner with EQ.

“MDMC is a concrete example of what inter-organization collaboration can achieve in St. Louis. Drawing upon an army of volunteers and institutional support from UMSL, MDMC has established itself as one of the biggest outsider draws to the region,” Allen said.

The pairing of the “>seven-year-old conference, now one of the top digital marketing conferences in the country, and EQ, the media outlet started in 2015 to raise the visibility of the St. Louis startup scene, will allow MDMC to continue to expand its national footprint, while EQ doubles-down on in-person care and feeding of the St. Louis entrepreneurial ecosystem.

“It’s so easy to align with MDMC’s mission as Digital Marketing is not an industry that you can get comfortable or complacent in. Not only are digital marketing skills required by every other company out there, but it’s a professional services industry that has to continually adapt and respond to macro social and technology trends in behavior, on behalf of all clients – irrespective of industry – so that the entire local economy can be successful,” Allen explained.

Digital Marketers Are at the Coal-face of Disruption 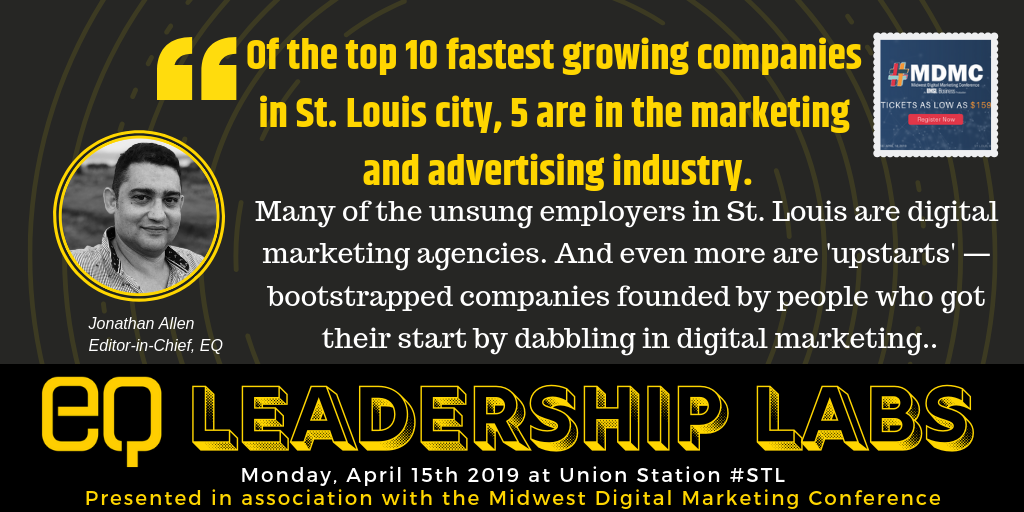 Their different but related audiences will reap the benefits of this cross-pollination in the form of new and different approaches to business, entrepreneurship, and leadership.

“I don’t think St. Louis innovation community really recognizes this yet, but the Digital Marketing industry’s inherent obsession with reach, influence and behavior, offers a fundamentally more inclusive umbrella than ‘Tech’ under which to hold many important conversations that impact the city; without dividing the concept of innovation into founders and funders,” Allen continued. “It makes sense to recognize MDMC as an essential cornerstone of our ecosystem.”

“Empirical evidence shows that startup innovation isn’t just a matter of being anointed by investors. Some companies can grow much faster by just finding their path and message to market quicker than their competitors. There will be many future employers in this city that got overlooked by investors, but not the actual markets they reached. Real customers really means investment.”

“Moreover, the role of marketing companies as leaders in the economy, always get underplayed no matter how many hundreds of jobs they create locally. If you take a look at Inc Magazine’s Inc 5000 list of fastest growing companies nationwide, of the top 10 fastest growing companies in St. Louis City, 5 are in the marketing and advertising industry. Many of the unsung employers in St. Louis are digital marketing agencies. And even more are ‘upstarts’ — bootstrapped companies founded by people who got their start by dabbling in digital marketing.”

EQ and MDMC: Standing Together to Lead

“Events like MDMC give us all the opportunity to stand up and lead the region, in this case in the arena of Digital Marketing,” she said. “What Perry and his team have done with that event is remarkable. People come to St. Louis to be part of it, people in St. Louis support it and provide value for it. That’s leadership.”

Perry Drake, Founder of MDMC and Professor of Digital and Social Media Marketing and Communications at UMSL, left St. Louis in 1987 for New York City. He soon found himself teaching at the first integrated marketing program in the country at New York University (NYU).

Twenty-eight years later, Drake returned to St. Louis to lead the Digital Marketing program at UMSL and immediately wanted to leverage his contacts for his students.

“I was starting to call on some of my old colleagues from NYU to do Google Hangouts and talk to my students. A couple of them offered to fly to St. Louis, and I thought well, if I wrap a few more people around them, and put them in front of more than just my students, we will have something. And that’s how the half day summit came about,” Drake said. That was 2013.

Fast forward to 2019, MDMC is a top digital conference with a unique flair and growing national reputation. With nearly 2000 attendees in 2018, MDMC is not a student conference, but has worked relentlessly to keep ticket prices manageable for students and anyone who wouldn’t have the resources to pay industry conference entry fees.

This means that the conference has a minimal budget and is completely produced by volunteers. Leave it to the Midwest to do a lot with less.

Brianna Smith, Executive Director of MDMC for the last three years, is in charge of programming as well as pretty much every other aspect of the conference.

She has watched the conference grow since attending for the first time in 2014, volunteering the next year, to running the entire conference. “We’re focused on educating. We could charge a lot of money, and we could bring in celebrity speakers, but we’re really focused on quality speakers and providing great resources whether or not you make a lot of money or you’re just starting your career, or you’re a student,” Smith said.

Regarding the partnership with EQ, Smith is excited. “MDMC and EQ are both really unique in St. Louis. Our region so much to offer, but the rest of the country doesn’t always realize that. Working together gives us both the opportunity to represent for each other’s audience. MDMC is bringing a lot of people from outside St. Louis and outside of the Midwest—from all over the country. We’re going to be able to get them connected with EQ and show them everything else that is going on here,” she said.

This year’s MDMC is Tuesday through Thursday, April 16-18, 2019. On Monday, April 15, 2019, at the same venue as the conference, EQ will host EQ Leadership Labs, a day of interactive opportunities for the community of EQ readers to meet, discuss, and learn together.

“This Labs concept is to bring what you do, whatever your level of expertise is that in whatever industry, from the extremely technical to the more psychological and ask, ‘What are the leadership opportunities here? How do I elevate what I do through the elements of leadership?’ That’s really what this opportunity is,” Gillaspie said. “It covers territory that you might find at any business conference, but with a common focus of applying leadership principles to make your business stronger, better, broader and more profitable.”

The EQ Community Network is free to join and opens up opportunities to network with other members, submit stories to EQ, post job offers, and access other regional collaboration tools.