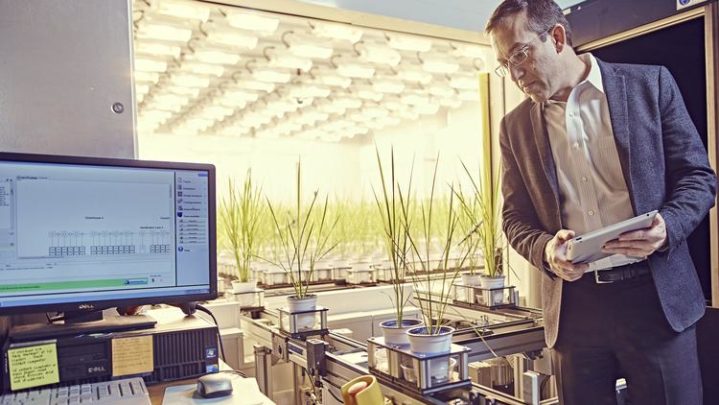 As the global population increases, agricultural yields must increase to feed the world’s population. Compounding the explosive population growth is the decreasing available tillable land [as subdivisions and industrial parks expand into former farmland.

One man standing at the center of solving that problem is Dr. Tom Brutnell, Chief Scientific Officer and co-founder of Benson Hill Biosystems and Director of the Enterprise Rent-A-Car Institute for Renewable Fuels at the Donald Danforth Plant Science Center.

Brutnell has been in St. Louis for four years, but his work in the AgTech field began more than a decade ago in New York, as part of the Boyce Thompson Institute at Cornell University. “When I was at Cornell, it was really at the beginning of what we call the genomics era,” he says.

“I was recruited with about eight other faculty to the Cornell campus around 1998-2001 as part of their genomic initiative. It was a very exciting time in plant genetics as high-throughput sequencing was getting off the ground and it was possible to look at the expression of all the genes in the genome. I could see the impact this work would have on agriculture.”

In his 12 years at Cornell, Brutnell worked with talented minds during the evolution of genomics, publishing high-impact papers and developing technology to increase crop yields. However, as the field evolved, he felt he was bumping against a ceiling.

“I got to a point in my career where I really wanted to do something different. For me, that was developing tools and resources for a new model system,” he says.

Setaria viridis has a short life cycle and sequencing the species could provide a much more efficient path for translating discovery to an application when it came to increasing crop yields than previous models.

“I realized at Cornell I was going to be limited. The space constraints were tight,” Brutnell says.

“There was not a whole lot of interest with my colleagues there to get into a new system. I realized I’d kind of be on my own little island trying to develop this system.”

At the same time, Brutnell’s future business partner Todd Mockler was conducting similar work at the University of Oregon. Mockler’s work was complementary to Brutnell’s research, and the two began talking about the business applications of their science.

As those discussions were taking place, Jim Carrington became the new president of the Danforth Center, and his mission was perfectly aligned with what Brutnell and Mockler wanted to accomplish.

“When he came to the Danforth, he came with a new mission and a new direction,” Brutnell recalls. “He wanted to use model plants, model grasses as a focal point for really moving into this next phase of ag innovation and next phase of discovery.”

So Brutnell left Cornell and came to St. Louis. In addition to Mockler, he met Matt Crisp, a former venture capitalist and AgTech entrepreneur who would be the final piece of the puzzle to get Benson Hill off the ground.

“Making a move is always a bit nerve-wracking. I had to give up a secure job at Cornell,” says Brutnell.

“I had a big group there and I knew I wouldn’t be bringing the whole team with me. But I could see the enormous potential of coming to the Danforth.”

Over the last four years, that potential has been realized.

Benson Hill has grown to 35 employees and is on the forefront of photosynthesis research and application. They’ve secured more than $10 million in funding and have established commercial partnerships with agriculture industry leaders.

“We could never have done this in Oregon or Cornell. The environment for investing is just not there,” Brutnell says.

“To even think about venture capital for in Oregon or Cornell wouldn’t have even crossed our minds. Really the environment here in St. Louis is critical to getting some of this early-stage ag off the ground.”

He describes St. Louis as ripe with opportunities that don’t exist in other places, one of which is the Danforth Center itself. Only 20 percent of Brutnell’s time is allocated for Benson Hill, as his primary role is Director of the Enterprise Institute for Renewable Fuels, a position that keeps him constantly busy.

While overseeing 20 people in his lab, he also travels for presentations and secures grant funding.

In 2014 alone, the Enterprise Institute made 43 presentations across the globe, licensed three technologies to the private sector and filed five applications for bioenergy patents. Since 2001, the center has secured more than $165 million in grants and contracts, more than twice the amount of its peer research institutes.

All of this is done in service to a simple idea: translate basic science into improved food and energy security.

“Part of the Danforth’s mission is really to get the technology out of the lab and into industry to commercialize it. I strongly believe in that philosophy,” Brutnell says. “If we publish a paper, make a great discovery, and that discovery sits on a shelf in a library and doesn’t see the real-world application, then we are doing that science a disservice.”

The Center has seen an influx of new talent in recent years, and now has a wide-ranging knowledge base all working toward a common goal.

“We’re all focused on improving plant performance and enhancing yield at some level. But we all bring different skillsets to the table and realize some synergies that you don’t really find at many academic institutions.”

Another rarity in academic institutions is such a liberal allowance of time for entrepreneurial pursuits. The 20 percent of Brutnell’s time he spends with Benson Hill is a luxury many in his field aren’t afforded.

It’s also hugely valuable. While the research facilities and academic knowledge base at the Danforth Center give Benson Hill an advantage in developing real-world applications, Brutnell’s experience on the business side gives him a sharp eye for how to best move the center’s discoveries beyond of the academic sphere.

“Because I’m involved in both the commercialization and the academic research, I can see where there’s a good fit,” he says. “I can see which discoveries are worth taking the time to file patents on and the best way to do that.”

While perpetually busy —Brutnell joked that he’s moved beyond working lunches to working dinners these days— he says the experience in St. Louis has been incredibly satisfying, “I might go out with someone for lunch to talk, and whether it’s about the latest technology to measure photosynthetic parameters or how to best structure our next deal, it’s all exciting to me.”