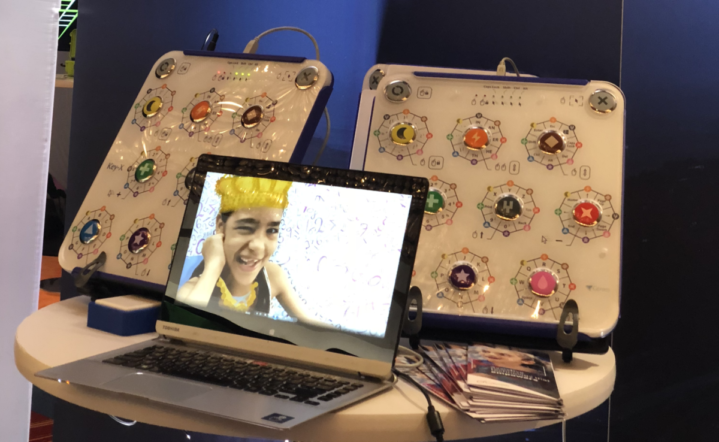 Key2Enable, a Portfolio Company of Singularity University, has launched a crowdfunding campaign on IndieGogo to fund the large-scale production and distribution of their product, Key-X, a keyboard designed for those with Cerebral Palsy.

The Key-X Multifunctional Keyboard is part of an eco-system of assistive technology and devices developed by Key2Enable that promises to open the doors of digital inclusion to people with Cerebral Palsy, Down Syndrome, Autism, Tremors, and Parkinson’s.

As a portfolio company of Singularity University, Key2Enable presented at the St. Louis chapter inaugural event on the Digital Divide. They also appeared on the Bourbon Friday Show on EQ’s Facebook Page, where co-founder William Oliveira showcased the Key-X assistive device.

The foundational concept of nine “iconographic keys,” which forms the basis of the core functionality underpinning the Key-X keyboard, was originally invented in Brazil by Gleison Fernandes de Faria (known as Gleisinho), who was born with cerebral palsy.

Striking the keys in specific combination (much like chords on a stringed instrument) enable those with physical or motor disabilities to use this special keyboard to input text and commands into a computer or mobile device, just as they would use any other keyboard or mouse.

Through a partnership between Gleisinho and Key2Enable’s founders, the Key-X was developed to be a keyboard with eleven large, well-spaced and touch-sensitive keys.

Successfully tested and praised by users and therapists in Brazil, the Key-X allows people with physical, motor and intellectual disabilities to use any computer, tablet or smartphone independently, efficiently and privacy-friendly way.

The Key-X has already been tested by over 2,000 people with different disabilities in Brazil. It is the first in a suite of assistive technology devices designed to open the doors of digital inclusion to people with any physical, motor and intellectual disabilities.

In the video below, one user combined the Key- with A-Blink, another device offered by Key2Enable, which enables him to operate the keyboard without using his hands. Instead he simply blinks to input the keystrokes and types, in Portuguese, “I love my keyboard.”

The potential impact of this keyboard on people with cerebral palsy cannot be understated, as many emotionally stirring videos on the IndieGogo campaign page illustrate.

Key2Enable invites supporters to imagine what digital inclusion really could mean for people all over the world, “can you imagine how many thoughts become unexpressed, experiences unenjoyed, and talents unexplored simply due to the fact that millions of people cannot freely and autonomously use essential devices such as computers?”

Through the Key-X, the startup is pursuing the BFG (“big hairy goal”) to impact one million people in the next 10 years.