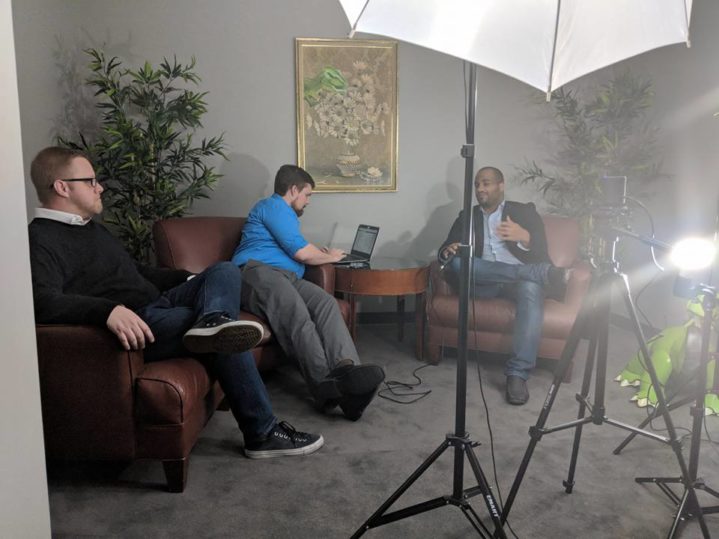 On Last Week’s “Bourbon Friday Show” – Erik Lutenegger of Tenacity, and the “New Newsfeed” on Facebook

Over the last two weeks, myself and a few other entrepreneurs at T-REX decided to organize a live-stream show on social media.

In honor of “Bourbon Friday” — the weekly happy hour at T-REX that was dreamed up and spontaneously organized by entrepreneurs from the coworking community — we called it The Bourbon Friday Show.

Along the way, we also talked shop and tech news — discussing updates to the Facebook Newsfeed.

The Bourbon Friday Show is just getting started, and we’d love your feedback! Drop me a message on Twitter @Nick_Niehaus or comment on our live-stream video on Facebook, and let us know what you’d like to see, hear and learn more about.

And to see what you missed on last week’s show, click above to watch the video, or read on for the highlights.

Here’s What You Need to Know: Quick Takeaways from The Bourbon Friday Show

So far, these changes haven’t had a devastating effect — but many businesses are worried that their posts will lose exposure.

On the show, we discussed suggestions for small businesses that Adam Mosseri, the VP of Product Management at Facebook, brought up in a recent interview with Wired.

One key take-away: “We’re going to be (weighing) long comments more than short comments.” It makes sense: longer comments suggest an actual conversation is happening on a post.

To start, focus on leaving longer comments on posts you read to get used to the idea. Then try to generate these kinds of comments on your own posts. Remember that it’s ultimately all about starting conversations…not about getting the most “likes” anymore.

Mosseri also said “There will also be more group content. Group content tends to inspire a lot of conversation.” If you haven’t created your own Facebook group yet, start one today!

Our final takeaway was to focus on live video. It gets way more engagement and comments than standard video. Get on camera and go live the next time you have something to share with your followers.

Overall, the rules are still the same: create meaningful content and you’ll be OK.

Our featured interview this week was with Erik Lutenegger, founder of Tenacity.

Tenacity specializes in web development on open-source platforms like WordPress. Erik’s specialty is performance optimization — making sites load really, really fast. His website literally loads 5 times faster than mine (should I be hiring him…?)

Fast websites are crucial. Amazon found that for every additional tenth of a second that a page took to load, they lost 1% of their sales! That means load times online directly impact the bottom line.

Erik helps companies reduce that time, and maximize the results of their digital efforts.

Back to Bourbon Friday’s Roots

We were especially excited to talk with Erik because he founded the tradition of Bourbon Fridays at T-REX.

Erik has been part of the T-REX community for almost 3 years — in fact, he said he sees it more as his home than his actual loft down the street!

As Erik developed relationships with other members on the 5th floor coworking space, he discovered a shared interest in bourbon and other whiskies. That Friday he brought a bottle from home and shared it with a few friends. Bourbon Friday was born!

Since then, Bourbon Friday has grown into something much more — and this live show is the (pun intended) proof!

Bourbon Friday has become the primary, regular social event for the T-REX community. I personally have met some of my absolute favorite people in town at the T-REX happy hours and love having meaningful, engaged, and often challenging conversations each week.

A Community With Room To Grow

We usually have 10 to 20 people at the happy hour. While it’s tempting to keep the event that intimate, we’ve seen an interest from many more people. It’s time to grow it!

We started The Bourbon Friday Show as a way to spread the word and attract more great people to the event. Over the next few weeks, we’ll be deciding how to promote it and invite more guests.

If you’re interested in getting involved or attending Bourbon Fridays at T-REX, please email Nick at [email protected] for more info.

In the meantime, we hope you have enjoyed our first 2 episodes. Please leave your comments and feedback below so we can continue to improve our content.

We’re excited to see you again this Friday!

Six Years of Storytelling Places Humans of St. Louis at the Intersection of Art, Activism, and Entrepreneurship

The Bourbon Friday Show with Andrew Glantz from GiftAMeal

The Best of the Bourbon Friday Show 2019