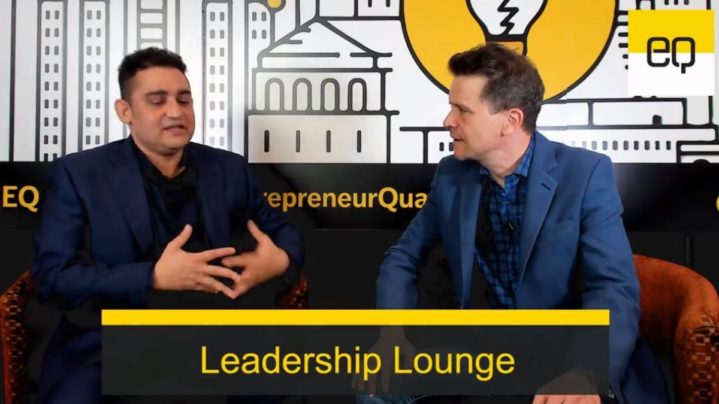 Tim Sanders, bestselling author of Love is the Killer App and a long-time hero of EQ’s Editor in Chief, Jonathan Allen, delivered a jaw-dropping keynote at EQ’s inaugural event, Leadership Labs. Following the event, Sanders joined Allen in the EQ Leadership Lounge for an opportunity to get deeper into some of the gems that came out of that presentation.

Culture is a Conversation about Action

Culture is the conversation we’re having about how we’re going to do things. Without that conversation, we end up with a default culture of every person for themselves. But, as Allen points out, people are really comfortable talking about doing things, but it’s harder to get them to have a conversation about something like culture. So how do we open that conversation?

Sanders says he defines it this way; “Culture is a conversation led by leaders, punctuated by action, about how we do things here successfully.” Success, he adds, is defined as “We accomplish the goal within our value set.” So it is a conversation about action, but it’s also about values.

More than that, culture is the operating system of an organization, and the secret to building a culture, Sanders says, is cadence. Every conversation is a coaching opportunity to talk about values, to talk about culture, to talk about success. The cadence of those conversations is what keeps that “code” operational.

Sanders also talks about some of the actions you have to take for a strong culture, such as hiring (and firing) based on culture, allocating resources according cultural values, and aligning your reward system with the culture.

Allen references another point Sanders made during his keynote, which is that anytime your organization starts to silo you’re at risk of slipping back into default culture. Sanders responds that silos are inevitable, but you can maintain culture by supporting interdependence and demanding collaboration.

Rapid problem solving is the secret to success. Allen says he feels that requires a lot of trust and asks Sanders the best way to cultivate the kind of trust that leads to rapid problem solving. “You only get back the trust you give,” says Sanders. So give people autonomy, let them have say in their job.

That, says Allen, is what he calls an “enlightened dictatorship.” It’s also something that requires having a high tolerance for failure.

Competition is the Enemy of Win-Win

Sanders calls competitors “competimates.” He also lists “complimentors” whose success lifts your success. In St. Louis, he reminds us, a lot of startups are actually competimates or complimentors because the greater their success the more funding is attracted to the region.

Allen wraps it up with a few lessons for St. Louis, which also sums up his vision for what EQ can do for St. Louis. In short, it’s about collaborating, not division. As Sanders adds, that goes far beyond business.