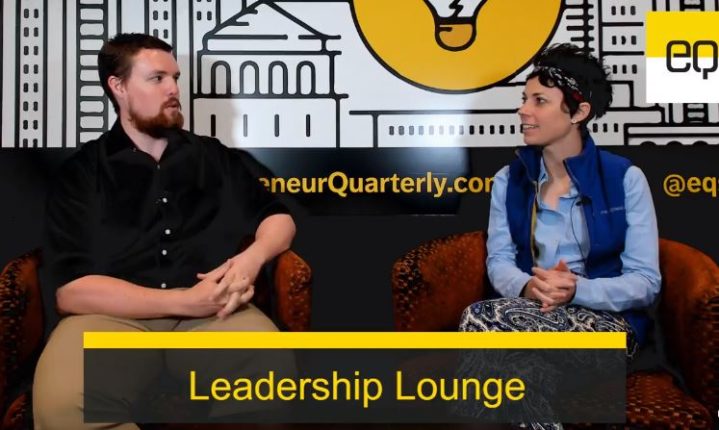 Katie Krum has always been a popular presenter at the Midwest Digital Marketing Conference and this year she was back to deliver a keynote titled “The Rise of Real: Social Media Strategies for 2019 and Beyond.” Nick Niehaus of Connect Marketing chatted with Krum in the EQ Leadership Lounge to recap her keynote and pick her brain about trends to watch in social media.

Krum started her marketing career in the startup world, so marketing, for her, has always been digital. She went on to work in digital marketing at Nickelodeon, bringing Sponge Bob to twitter and setting up voting for the Kids’ Choice Awards on twitter. She then went to Marriot because she wanted to expand her experience with e-commerce and data-driven marketing. She continued to innovate in digital, but also added depth to her understanding of traditional brand marketing.

Later, at Under Armour, she found herself in the realm of content marketing somewhat unexpectedly as that brand acquired MyFitnessPal and Map My Run which meant taking on a digital health and wellness content platform and a digital community. Now, as SVP of Digital Innovation at Weber Shandwick St. Louis, she’s bringing an integrated mindset to traditional marketing and public relations.

How the Social Media Landscape is Changing

Krum agrees with Niehaus that social media has become “a bit of a mess” in the last couple of years and adds, “I think this is an interesting time for a brand. The market has come of age, so you could say there is a maturity factor there, but on top of all that we’ve seen trust come into question as it relates to the platforms.”

She’s referring, of course, to the privacy issues, the fake news, and even the mental health, political, and cultural issues that have been linked to social media. She thinks this might be “Chapter Two” of social media, and that this chapter is going to be a lot more complex. So it’s time for brands and marketers to not run away from the platforms, but to sit down and really examine how they’re going to show up in this complicated space.

Brands Need to be Transparent and Responsive

One recommendation Krum offers is for brands to become extremely transparent and straightforward about how they’re collecting consumer data and what they’re doing with it. One example she gives is the industries that have made all the legal language about privacy simpler and easier to understand when they post it on their sites.

She also finds the trend toward “slow media” interesting as a response to the social media landscape. She cites renewed interest in email newsletters, podcasts, and publishing platforms such as Medium and LinkedIn as indicators that consumers are interested in a deeper dive into the information shared by brands and content creators.

Krum says she’s really interested in LinkedIn’s potential because it’s the most trusted social media resources “by leaps and bounds,” in part, she believes, because the users are there for professional purposes. She also lists Twitch, which turns the Reddit forum into a full-blown multi-media experience, as an interesting trend to watch. She sees this platform as demonstrating the power of “creating community in a very multi-media way.”

It’s a Blend of Generations and Mindsets

While many people seem to tout the Millennial generation as having a better grasp of how digital marketing should be done, Krum says she doesn’t believe there is any generation that has more to offer than any other. In fact, she says, one of her favorite parts of working in a company that has a wide cross-section of ages is because she feels it’s that diversity that brings richness to the conversation.

Niehaus and Krum agree that, at a basic level, the principals of old-school marketing still apply to digital. As Niehaus says, the more you learn about digital marketing the more you realize it’s really pretty simple. Krum chimes in with the cardinal rule of marketing, “Know your audience.” That one, at least, is probably never going to go out of style.