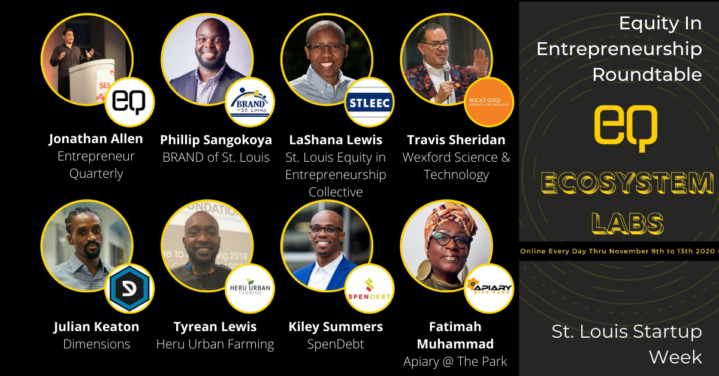 One of the many highlights of this year’s St. Louis StartUp Week was a roundtable discussion organized by EQ about Equity in Entrepreneurship. We brought together some key players who have all the right credentials and experiences in this important field to shed light on how and why they’ve been able to succeed.

Read on to find out how social activism and life experience have played their part, consciously or otherwise, in some of the journeys to entrepreneurial triumph, or watch the discussion here.

“The idea that entrepreneurship can be a form of activism is being addressed by founders themselves and also by consumers who are making more conscious decisions about how their dollars are spent,” says Travis Sheridan, Chief Community Officer at Wexford Science & Technology, St Louis and former Executive Director of Venture Café.

So how does a person’s background play into this? “A 100 percent of what I’m doing comes from my entire life experience,” says Fatimah Muhammad, founder and CEO of Apiary @ The Park, the first coworking space in North City.

She also believes that a consequence of the pandemic has meant people have found creativity, spirit and courage that they never knew they had. This has led others who can bring about change to stop and take notice, the WEPOWER 2020 Cohort winner says.

Kiley Summers, a former Arch Grant recipient, describes the background which inspired him to create his company Spendebt. “Everything we do comes from a background of humble beginnings in which a single mother raised three boys and struggled with her finances.”

Given that there was no financial education in his urban community, Kiley saw a need to break a perpetual generational cycle and to come up with solutions that would make a difference as to how people organized their finances.

One of Spendebt’s aims is to help people gain control of their debt rather than allowing their debt to control them.

Many would argue that Black entrepreneurs face unfair, additional risks because of inequalities within society. Nobody before her had thought to set up a co-working space in North St. Louis, Fatimah points out.

Given the high levels of unemployment, clear social disparities as well as a significant number of entrepreneurs there, ‘one would have expected it to be a prime location for co-working spaces to spring up,’ she says.

Instead, these were centered in areas where entrepreneurs may not have needed the types of wraparound services which her co-working space provides. “There’s an imbalance in looking at where businesses are placed, and why they are placed there,” she says.

Travis uses a hockey analogy to explain why the authorities are not stepping in to help redress some of the imbalances Fatimah flagged up. “Government wants to take a shot on goal when there’s an empty net,” he said.

“All the barriers are removed so that they can claim success for their innovative decision. Living in a place like North St. Louis means that there’s not just one goalie but multiple goalies and a lot of people trying to block us from success. And yet we are still taking the shots,” he concludes.

“What is the risk that we’re taking by not investing in African-American businesses in North St. Louis?” is the question Philip Sangokoya, Founder of BRAND of St. Louis wants answered.

Bridging the racial equity gap is what’s at stake here, he believes. Articulating this and reframing the risk gives something for governments, private corporations and nonprofit foundations to aim for, Philip feels.

“My banking experience led me to realize that entrepreneurs are all different,” Phillip says. ‘Trying to categorize can make it easier to be judgmental and create stereotypes.’ He believes in co-creating solutions that bring together people from all races and demographics.

The Risk of ‘Analysis Paralysis’

LaShana Lewis is Executive Director at St. Louis Equity in Entrepreneurship Collective. She believes that there’s a danger in trying to give everything a label and that this can lead to what she calls, ‘analysis paralysis.’

“Naming something is important, but so is doing some work until you figure out what the name actually should be,” she says. She cites addressing the framework around equity issues as an example, and drilling down to find appropriate solutions for specific problems.

Outcomes like closing the equity gaps in wealth and income and increasing the amount of savings African American families have, will be key measures of success in attaining equity, says Travis, but, importantly, he asserts that the goalposts for an investable business should not be changed through affirmative action type policies.

At the same time, Phillip believes corporations need to demonstrate a degree of social conscience. “The question should be, in addition to all those profits for your shareholders, what are you doing for the communities that you’re located in?”

This needs to be balanced with getting local communities to support the local businesses within them, according to Fatimah.

Growth Mindset And Sharing Your Leadership

The fact that there are disproportionately fewer Black entrepreneurial role models to look up to obscures the route for many to consider starting up a business, argues LaShana. To foster a climate that encourages more Black entrepreneurs, local communities need to consciously disrupt a mindset and ‘rhythm’ of consumerism and scarcity.

Speaking to the topic of Growth Mindset, Tyrean Lewis who is founder of Heru Urban Farming and a WEPOWER winner, drew inspiration for his business from his roots. He was acutely aware of the lack of access to fresh food within his community, compared to the diverse and nutritious choices available in some of the richer suburbs of St. Louis.

He’s set up his own urban farm in the city and locals have been clamoring at his door to buy the produce he grows. Tyrean practices a growth mindset by ‘sharing his leadership’, by supporting his neighbors in a very stark and selfless way by giving jobs to locals with drug issues and watching their lives improve.

Julian Keaton, another WEPOWER winner, moved to LA a few years ago without a support network or intimate knowledge of the city. The challenges this brought him inspired him to his virtual and augmented reality game, ‘Dimensions,’ which aims to connect people in communities they’re unfamiliar with and give them context to new areas of the world they may have moved to.

Julian believes that, although governments are there to solve certain social issues, entrepreneurs have more flexibility and agility to work within the community to solve these kinds of problems.

He asks some crucial questions, “What do we risk by not solving these issues as we wait for governments and politicians to fulfill their campaign promises? Why should we not do our civic duty to make our communities more prosperous for both ourselves and those around us?”

The suggestion is that ‘entrepreneuring our way’ out of inequality is possible and valid. Julian, closed out the panel with these stirring words, “All of us in this discussion are working as the change agency to liberate and elevate ourselves as people,” he says.

“We have to wake up each day and be motivated and inspired to get the job done. This will allow us to look after ourselves, our families and our neighbours. If we aren’t doing that work, then what are we really doing?”

This Discussion Was Just the Tip of the Iceberg:

The panel came up with a raft of different solutions which, taken together, might go some way to addressing the issue of Equity In Entrepreneurship. Here is a summary of some of their ideas which could be applied for a multifaceted approach to tackling the topic of equity in entrepreneurship at large: