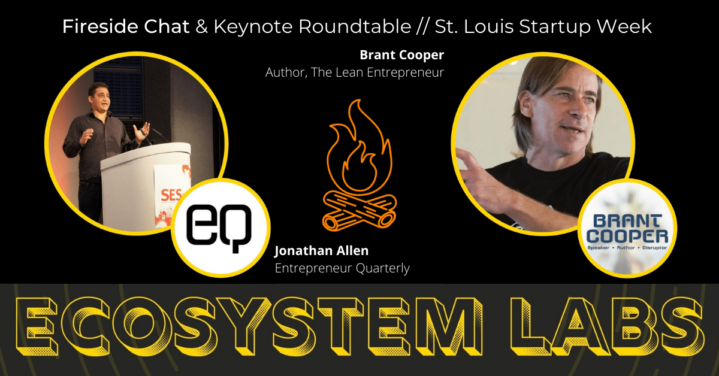 How to Build an Innovation Ecosystem: Insights from Brant Cooper

Brant Cooper, the New York Times bestselling author of The Lean Entrepreneur and CEO of Moves the Needle, has become a great friend and supporter of EQ. We were delighted to welcome him as our guest during STL Startup week for an enlightening chat about the harsh realities that can face all entrepreneurs at some point.

Getting Real about Building Innovation Ecosystems with Brant Cooper

Read on to find out Brant’s take on creating the right ecosystem for startups to thrive. You can also watch the discussion we had with him by clicking on this link.

Brant spent sixteen years working in Silicon Valley. No matter where a startup in the US might be geographically, the deal was that to get the right funding and become a success, there was nowhere else to be other than in Silicon Valley.

These were exciting times but ultimately limiting, he found, and so he moved back to his hometown, San Diego, in 2007.

“Over the past 10 years, we’ve seen ecosystems emerge that don’t pretend that they want to be like Silicon Valley and, instead, want to do things differently,” Brant says. His mantra has been to use the resources available in San Diego to do things better.

That’s meant actively recruiting underrepresented founders such as Black founders, Latino founders and women, he says. What happens then is that the ecosystem itself accurately reflects the people who are part of it.

So, how do you get people to believe that they can grow and be successful on their home turf without having to up sticks and relocate?

Those embarking on a food startup or an e-commerce startup or indeed any other kind of startup all have similar needs, Brant says. The challenges that they face are similar. “This is actually what the ecosystem is about. It’s not about identifying as being some particular industry or vertical.”

It’s true, he says, that different types of small businesses may have different ambitions in terms of finance. However, an ecosystem is not created by choosing one type of business over another, he believes, and what matters is getting all businesses to connect and interact with each other.

“Ecosystem developers act almost like startups themselves. They need to generate empathy for entrepreneurs. That means figuring out exactly what startups will need in order to succeed,” Brant believes.

“Shining a light on success stories is one of the more difficult things to do in a young ecosystem, “ Brant says.

Back in San Diego, he spent a lot of time encouraging young startups to engage with each other and to talk about what they were working on. Interactions which included sharing successes empowered them and made them feel they were creating a community.

If we care about growing an ecosystem then we need to reward small businesses which may only have a hundred employees and make $10 million a year, he says. Instead of seeing these types of company as small-fry, we should be shining a light on them and celebrating them, he believes.

At the same time, getting investment, especially in the early stages of a startup when it’s at the bottom of the pyramid is really tough, Brant admits. “You have to go find a bunch of investors that are willing to lose money. That’s just fundamentally how startups work. It takes a thousand to get a unicorn,” he says.

Brant sees a huge gap that’s ripe for would-be investors. Instead of focusing on big longer term returns, investors could instead look at being paid out regular interest on what they have put in, for example. We should be thinking about financing that does away with traditional venture capitalists and banks, he says.

We put Brant’s ideas to some of the key funders and founders in St. Louis. You can find out what they had to say in our next article coming soon.