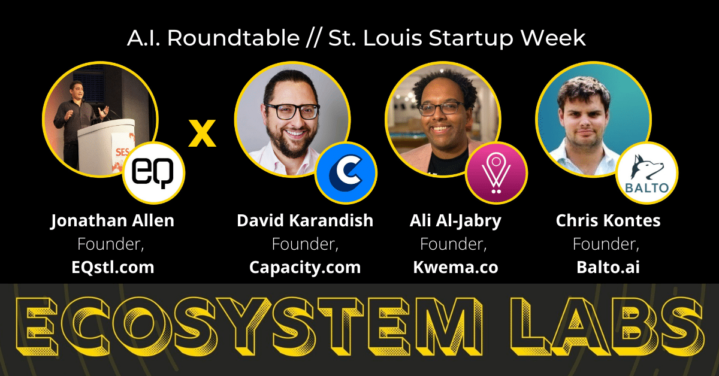 3 AI Startups in St. Louis Share Insights Into How to Prepare for Artificial Intelligence Innovation in the Workplace

“St. Louis has an opportunity to be automating, rather than being automated out. It’s important for all our businesses to make this the most AI-friendly city in this country. St. Louis needs to lead the charge from an AI perspective.” - David Karandish, Capacity.

AI is one of the most exciting new sectors in the city. It’s a seemingly insatiable industry with a global market size expected to reach over USD 62 billion in 2020. That’s over a third higher than the 2019 figure.

A Bright Future For Artificial Intelligence in St. Louis

For STL StartUp week, EQ brought together 3 key players from St. Louis in this fast-growing and lucrative market. Why do they think our city should be leading the charge in AI? Read on to find out, or catch the entire discussion on YouTube:

The Key Is Contextualization

“When you have a customer or a team member with a burning question, there’s a need to provide answers which inspire confidence,” says David Karandish, Capacity’s co-founder and CEO.

Imagine having an AI-powered helpdesk that automates support for employees and customers. That’s exactly the service which Capacity offers.

For him, context is vital so that nuances are taken into account and people can see why you answered questions in a certain way, how you came to the conclusion you reached and where the answer was sourced from.

Clarification is another important principle, David says. Capacity, for example, uses algorithms to offer potential matches for what it thinks users might be looking for.

“We’ve learned that the user experience is just as important as the AI itself,” explains David.
That can mean that the lines between training clients to use AI and making the AI more user friendly can become a bit blurred.

The Power of Conversation

Balto provides automated real-time sales call coaching for those working in call centers. A small part of Balto’s overall AI solution transforms voice conversations and into text which is analyzed in real-time to offer tailored advice to improve sales performance while the rep is on the sales call.

“What we’re doing is understanding conversations as they’re happening,” explains Chris Kontes, Balto’s COO and Founder. All kinds of signals within a conversation are examined and then categorized on both the customer and sales rep sides.

Balto reckons that all sales conversations are about 80 to 85% the same, falling into categories such as a customer saying that they don’t want to engage or that they want to purchase something.

“It is the remaining 15% where customization becomes relevant,” explains Chris. Analysis of these conversations between call center agents and customers is where the bulk of client customization takes place.

Kwema uses bluetooth beacons in all kinds of places, from mines to factories, to automate the mapping of workplaces to identify safety hazards, and collect other information which can help keep employees safer.

“It’s a bit like scenes from Batman where you see buildings mapped out and the people within them,” explains Ali Al Jabry Kwema’s CEO. Once the entire workplace capacity and area are sketched out, additional information about risky hotpots can be added in.

For Kwema, getting employees to engage and manually validate key AI findings has made it a highly effective tool, Ali says.

What all three of our entrepreneurs are doing is helping companies discover things about themselves rather than building a ‘one size fits all’ answer for everyone.

Allaying the Fears of AI

Some people are afraid that AI will end up taking their jobs, but is their fear justified? The panel believes there will always be plenty of jobs to go round, particularly in St. Louis.

“In AI, there will be a lot of engineering positions like software engineers as well as operational and development type roles,” says David, “And, there’ll be other jobs too for data trainers and App connectors who may not necessarily have a computer science degree but who will still fulfill key functions.”

“The real question is, do we want to build something that moves forward and creates something innovative and interesting? Speaking in a personal capacity, if we work in that direction in St. Louis, job creation will become much easier.”

“Automation will be able to make jobs more efficient, rather than take them away,” Ali says. He cites the example of police drones which may one day not need to be constantly monitored because Ai would take over and simply alert staff when something is wrong.

David believes that one of the things AI has done is allow people to concentrate on performing more high-end tasks rather than more mundane jobs.

“I think what we’re going to find is an inherent validation of a lot of the things that, in retrospect, will seem very intuitive,” continues David.

“The challenge is actually changing the behaviours of humans, Chris says. “It’s more about enforcing the things we know to be true, as opposed to discovering a new and radical insight about the role of selling in a call center.”

It’s the ‘prescriptive’ phase that is often in need of human intervention. It refers to the range of actions that can be taken to the predicted outcomes.

“I would say AI is most effective when it uses human interaction to become smarter,” Ali says.
There may well be far more scope in the future for jobs that encompass this phase of the process.

What might happen one day, David thinks, is that the ‘prescriptive’ role becomes more ‘counsellor-esque’ rather than diagnostic. All this means there could be more opportunities to care in the workplace which make it a kinder place to be.

St. Louis To Take the Lead in AI

A final thought from David, “St. Louis has an opportunity to be automating, rather than being automated out. It’s important for all our businesses to make this the most AI-friendly city in this country. St. Louis needs to lead the charge from an AI perspective.”